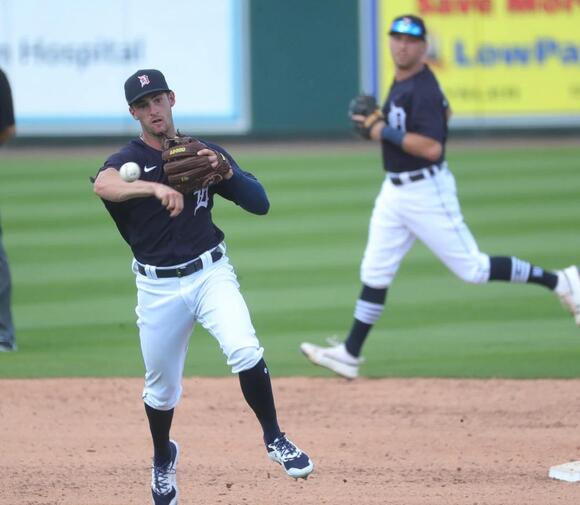 The Detroit Tigers called up infielder Zack Short ahead of Wednesday’s doubleheader with the visiting Pittsburgh Pirates.

First baseman Renato Nunez was designated for assignment to make room for Short on the 26-man roster.

Short, 25, was set to make his major league debut in Wednesday’s afternoon opener, batting eighth and playing third base.

The Cleveland Indians signed former New York Mets and Detroit Tigers catcher Wilson Ramos to a minor-league contract. Even though the Chicago White Sox have had great success through the first three months of the season, they have not had the greatest luck in terms of player health. Matters only got worse for the White Sox on Tuesday, as catcher Yasmani Grandal is out for the next four-to-six weeks after tearing a tendon in his left knee during Monday night’s game against the Minnesota Twins. If they were, by chance, looking for a catcher on the open market, they can cross one name off the list.

Following Friday night’s loss to the Minnesota Twins, the Detroit Tigers surprised quite a few people by optioning Matt Manning to Toledo. Prior to tomorrow’s game, the Tigers will reinstate P Derek Holland from the 10-day injured list. By making this move, the Tigers will be able to give Manning...

Detroit Tigers announce 4 roster moves, and you’re probably not going to like them

5 Detroit Tigers who could be traded by Friday

This coming Friday, the Major League Baseball Trade Deadline will come and go and we will know if the Detroit Tigers decided to make a move or not. According to Tigers GM Al Avila, the team is no longer in a “rebuild” and instead, they are now “building.” Avila has said that the Tigers are only going to sell a player at the trade deadline if he feels like it helps the team now and in the future.

The Detroit Tigers are rumored to be in on one of the big-name shortstops who are available this offseason. When the offseason begins, and free agency kicks off, the Tigers are supposed to be pursuing the free agent shortstops in hopes of finding the shortstop of the future. It’s a...

On Sunday night, the 2021 Major League Baseball Draft kicked off and our Detroit Tigers owned the No. 3 and No. 32 overall picks on opening night. When the Tigers were on the clock with the No. 3 overall pick, just about everybody thought they would select SS Marcelo Mayer but GM Al Avila shocked us all by selecting high school pitcher Jackson Jobe, who was the No. 3 ranked pitching prospect by MLB.com. Following the pick, #FireAvila was trending on Twitter within minutes.

It’s a beautiful sunny day here in Detroit as the 4PM MLB trade deadline has passed and both Detroit Tigers players and fans can let out a sigh of relief. Now that the dust has settled, Al Avila should be sitting on his porch enjoying his favorite rum drink with a little pink umbrella and be quite proud of himself. This trade deadline was a success.

DETROIT -- Miguel Cabrera drew ever closer to history, reaching base four times and hitting two home runs, as the Detroit Tigers beat the Baltimore Orioles 6-2 Thursday night at Comerica Park. The Tigers (50-55) have now won three games in a row, including 10 in a row at home....

The Detroit Tigers on Monday agreed to terms with right-hander Ty Madden, the 32nd overall pick in the 2021 MLB

If you happened to tune in for Monday night’s game between the Detroit Tigers and Texas Rangers, you saw an offensive onslaught that has not been seen too often as of late for good guys. In fact, the 14 runs the Tigers scored against the Rangers were the most runs...

Short is not starting the first game of Saturday's doubleheader against the Twins. The infielder struggled considerably leading up to the break, hitting .111 and striking out 14 times in his last 27 at-bats. Niko Goodrum will start at shortstop for the first game, with Short likely to get the nod Saturday night.

The Detroit Tigers optioned infielder Willi Castro to Triple-A Toledo and designated outfielder Nomar Mazara for assignment on Friday. They will be replaced on the roster by infielder Isaac Paredes and outfielder Derek Hill, both of whom were recalled from Toledo. Castro, 24, finished fourth in the American League Rookie...

Detroit Tigers infielder Zack Short is not in the starting lineup for Monday's series opener against right-hander Kyle Gibson and the Texas Rangers. Short is taking a seat after going 1-for-10 with a run and five strikeouts over the weekend versus the Minnesota Twins. Harold Castro is replacing Short at shortstop and hitting seventh.

A lifelong dream came true for Josh Crouch. After years of hard work and dedication to America’s greatest pastime, Crouch was drafted into the MLB by the Detroit Tigers. Crouch was selected in the 11th round and the 315th overall pick. Crouch grew up in Sebring and has wanted to...

Detroit Tigers not planning to sell at deadline, per report

With the MLB trade deadline less than two weeks out, the Detroit Tigers sit in third place of the AL Central with a better-than-expected 44-51 record. Though they’re 13.5 games out of the division lead and 9.5 behind the second wild card-holding Oakland A’s, the Detroit News’ Chris McCosky reported that GM Al Avila will not be looking to sell assets before the deadline.

Detroit Tigers manager AJ Hinch penciled Miguel Cabrera into Monday's starting lineup as the team's first baseman for the second time since June 22. As the All-Star break approached, the Tigers pulled Cabrera away from his semi-regular duties at first base. His right calf flared up, and although Cabrera didn't need a stint on the injured list, Hinch didn't want to roll the dice near the halfway point of the season.

Detroit Tigers: Two players closer to a call-up than we realize