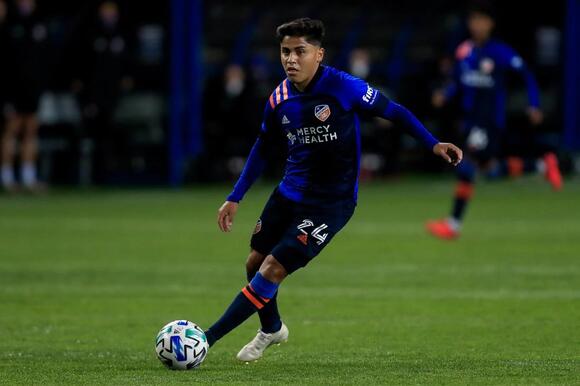 The New York Red Bulls added a boost to their midfield, acquiring Frankie Amaya from FC Cincinnati in a deal that could return more than $1 million in general allocation money if performance-based incentives are met.

Amaya, 20, was the No. 1 selection in the 2019 MLS Super Draft after a brief stint at UCLA that was interrupted by United States international camp duties.

Amaya, who has one career MLS goal in 40 games (36 starts) with Cincinnati, reportedly requested a trade this past offseason. He did not play in the season opener Saturday.

“His technical skills and ability with the ball will give us more control and more options in transition and in the final third,” Red Bulls coach Gerhard Struber said in a release. “The task for us as a coaching staff will be to integrate him quickly and immerse him in our tactics and game plan.”

The Red Bulls opened their season Saturday with a 2-1 loss to Sporting Kansas City and will visit the Los Angeles Galaxy on Sunday. Amaya is a native of nearby Santa Ana, Calif.

FC Cincinnati also opened their season Saturday, playing to a 2-2 tie on the road against Nashville SC.

Inter Miami’s frustrations continued Saturday night as the team’s road game against the New York Red Bulls was postponed following a three-and-half-hour weather delay. The match will be rescheduled for a date to be determined. The team will return to South Florida on Sunday to prepare for Wednesday’s home game against the Eastern Conference leader New England Revolution.

The New York Red Bulls will look to extend their unbeaten streak to four matches when they will host a struggling Inter Miami on Saturday. Inter Miami suffered another loss and they are on a sliding 5-match losing streak. But they have been better on the road than they have been at home and will surely want to stop their slide.

Recap & Highlights: Toronto FC come from behind to salvage a point against the New York Red Bulls

The only thing better than watching the Toronto summer sunset is watching that sunset during a TFC game at BMO Field. Javier Perez’s men came from 1-0 down to salvage a point in their second match at BMO Field in the space of five days. The draw means that TFC are now on a three match unbeaten streak, their longest run of the season so far. Progress nonetheless after the Reds lost six straight games between May 22nd and July 3rd.

The New York Red Bulls visit Toronto FC this Wednesday. Kickoff is set for 7:30 p.m. ET. Get to know the matchup in By The Numbers, presented by NJ Lottery:. 4: So far this season, Carlos Coronel has four clean sheets. 7: This season defender Tom Edwards, who came on...

This Wednesday the New York Red Bulls will visit Toronto FC at BMO Field. Kickoff is set for 7:30 p.m ET. Here are the Keys to the Game, presented by TriHonda Dealers:. On May 8th the Red Bulls defeated Toronto 2-0, with goals scored by Frankie Amaya and Caden Clark.

MLS and the New York Red Bulls filed a lawsuit in federal court on Thursday against Scott Pearson, the purported agent of midfielder Alejandro "Kaku" Romero Gamarra. The suit accuses Pearson of "tortious interference" in his handling of Kaku's contract with the league, and the player's subsequent move to Saudi Arabian club Al-Taawoun. MLS and the Red Bulls are seeking over $6 million in damages.

Toronto FC faces the New York Red Bulls, led by forward Caden Clark, in a 2021 MLS regular season match on Wednesday, July 21, 2021 (7/21/21) at BMO Field in Toronto, Ontario, Canada. Local market fans can watch the match for free via a trial of fuboTV, while out-of-market fans...

Inter Miami will visit the New York Red Bulls on Saturday, July 17 at Red Bull Arena. The match is set to kick off at 7 p.m. ET. What can Inter Miami fans expect ahead of the team’s third fixture against the Red Bulls in Club history?. Here is your...

Ola Kamara scored his team-leading seventh goal of the season and D.C. United defeated the New York Red Bulls 1-0 on Sunday night for their first-ever win over one of their oldest rivals at Audi Field. Julian Gressel created the turnover and provided the assist leading to Kamara's goal, which...

How to watch D.C. United vs. New York Red Bulls

Fresh off of a 2-2 comeback draw in Chicago, D.C. United are set to host the New York Red Bulls on Sunday. The Black-and-Red put in a gutsy, midweek performance, clawing back from 2-0 down to rescue a point in the 87th minute. With 14 matches under his belt, Hernán Losada, 38, finds his squad ninth in the Eastern Conference standings, three points off of 7th-place New York City F.C. Between them is none other than Sunday's opponent.

D.C. United battled their way past their eternal rivals tonight, beating the New York Red Bulls 1-0 in a physical, gritty match at Audi Field. Ola Kamara notched the winner with his team-leading seventh goal of the season on an assist from Julian Gressel, and a standout team defensive effort helped United hold the Red Bulls to just one shot on goal.

The Atlanta Braves acquired outfielders Adam Duvall and Eddie Rosario in separate deals ahead of Friday’s trade deadline. The Braves

Columbus’ fate was probably sealed the moment Rafa Marquez’s last-gasp header sailed past Brad Guzan and into the U.S. net, giving Mexico their first FIFA World Cup qualifying win in Ohio’s capital – and their first anywhere on American soil since 1972. This was on Nov. 11, 2016. Until then,...

HARRISON, N.J. (July 16, 2021) – *The USL Championship and New York Red Bulls II announced today the decision to postpone NYRB II’s match against the Charlotte Independence on Saturday, July 17 due to a positive COVID-19 test in the NYRB II organization. The individual is quarantining at home and...