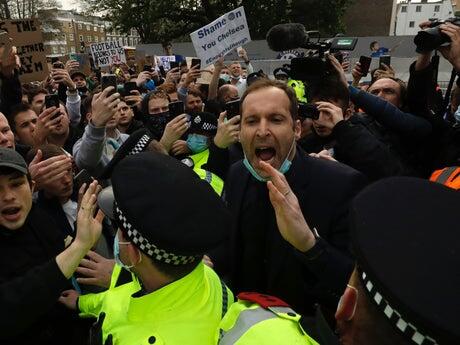 Petr Cech was forced to intervene as thousands of Chelsea supporters protested against the planned European Super League outside Stamford Bridge on Tuesday night.

The Blues are one of a dozen clubs who have committed to joining a new breakaway European competition they hope will rival the Champions League.

The proposal, announced on Sunday night, has been met with almost universal criticism with supporters, pundits and even politicians speaking out to condemn the move.

Leeds and Liverpool fans joined forces on Monday evening to protest against the venture ahead of their match at Elland Road.

And thousands of Chelsea supporters did the same on Tuesday ahead of the Blues’ meeting with Brighton in the Premier League.

Former goalkeeper Cech, who is now a senior club advisor, got involved to try and plead with those present to allow the team buses into the stadium complex.

Thomas Tuchel has confirmed talks have taken place with Petr Cech and Chelsea director Marina Granovskaia following the conclusion of the 2020/21 campaign. Chelsea returned to pre-season training earlier this month ahead of the upcoming 2021/22 campaign. Tuchel will take his side into the new season as European champions, and will be looking to build on from his first six months in charge.

Chelsea make the short trip from west to north London on Sunday afternoon to face Arsenal in the Mind Series mini tournament at the Emirates Stadium. This is the first of two matches for the Blues in the pre-season tournament where they will also face Tottenham Hotspur on Wednesday night at Stamford Bridge in their second outing, and their final fixture of pre-season before their 2021/22 campaign gets underway on August 11 against Villarreal in the UEFA Super Cup in Belfast.

One of the most historic and prestigious football clubs in India, East Bengal found themselves embroiled in controversy after a fan protest on Thursday led to five people getting injured and 60 getting arrested after clashing with the police outside the club stadium gates. Hundreds of rival groups of fans...

Stamford Bridge Sold Out for First Game of the Season

Chelsea's first Premier League match of the 2021/22 season against Crystal Palace has been sold out with a full capacity crowd expected. Throughout the recent COVID-19 pandemic, fans have not been able to watch their football teams in the stadium at full capaity as England had restrictions in place but the spectators will be returning for the upcoming season.

They'll be running round Tottenham with the European Cup! Chelsea will parade Champions League trophy in front of Spurs' faces when arch-rivals visit Stamford Bridge for August pre-season friendly... two months after the Blues won the Porto final

Chelsea will parade the Champions League trophy they won earlier this year when arch-rivals Tottenham visit Stamford Bridge for a pre-season friendly on August 4. The Blues beat Manchester City in the European final on May 29 to win their second ever edition of the competition, thanks to Kai Havertz's first-half winner for Thomas Tuchel's side.

Defending champions Chelsea face a trip to rivals Arsenal on the opening weekend of the 2021/22 Women’s Super League season between 3-5 September. The WSL and Women’s Championship fixtures were released at 9am BST on Friday morning and have thrown up a tricky-looking start for Emma Hayes’ side. Chelsea will...

Timo Werner would reportedly be open to leaving Chelsea this summer. Werner only joined the Blues last summer, but the 25-year-old found his first season in England tough going, managing just six goals in 35 Premier League appearances - although he did fare better in the Champions League, notching four in 12 games as the Blues went on to win the competition.

Richard Marshall blamed his team's indiscipline after Salford Red Devils were hammered 38-10 by Leeds Rhinos at Emerald Headingley. The Rhinos ran in six tries and Salford had two players sent to the sin bin in what turned out to be a one-sided contest in Super League on Friday. Leeds...

Chelsea will begin their Women's Super League title (WSL) defence with a trip to London rivals Arsenal after the fixture list for the 2021-22 season was released on Friday. Manchester City, who finished second last season, travel to Everton, while their cross-town rivals Manchester United host Reading in the opening round of matches.

Chelsea 'are considering bringing back Eden Hazard this summer with Real Madrid happy to sell him for £51m'... while Timo Werner is 'unhappy at Stamford Bridge and wants move if new striker joins'

Chelsea are contemplating the idea of bringing Eden Hazard back to the club from Real Madrid this summer, according to reports. The Belgian winger has endured a difficult two seasons in Spain since joining Real from the Blues in an initial £88million, with the 30-year-old playing just 21 times for the Spanish giants last season in an injury-hit season.

Brentford have announced the signing of midfielder Myles Peart-Harris from Chelsea on a four-year contract, continuing the exodus of young players from the club. The 18-year-old central midfielder has moved between the West London sides for an undisclosed fee, and the Bees have the option to extend his deal for a fifth year.

Chelsea are looking to lure Robert Lewandowski to Stamford Bridge from Bayern Munich. Here’s your daily round-up of transfer gossip from World Soccer. As Thomas Tuchel prepares for his first full season in charge at Chelsea, the German is looking to shape a squad capable of challenging for the league title. Of course, it’s not going to be easy with the likes of Manchester City, Manchester United and Liverpool having similar ambitions next season. However, the Blues are being linked with some world-class players this summer as they look to strengthen their squad. According to Bild, the Blues have spoken to the agent of Bayern Munich striker Robert Lewandowski. In this case, the 32-year-old is seen as a back-up for if they fail to land Erling Haaland. Although Haaland remain’s Chelsea’s first choice target, there’s no doubt that Lewandowski would be a fantastic addition. Even if he scored half as many goals as he has done in Germany, he’d be a good signing for Chelsea.

A member of Chelsea's senior squad will carry the Champions League trophy around Stamford Bridge in their pre-season clash against Tottenham. The Blues face their London rivals on August 4 in Mind Series, and it was previously confirmed that the European Cup will be on display for supporters before the clash.

LEEDS have beaten Liverpool to Lewis Bate as the £1.5million midfielder sent an emotional goodbye message to Chelsea. The England youth star, 18, is Marcelo Bielsa's fifth summer recruit on a three-year deal, despite West Ham and Southampton also being keen. Talks with Chelsea over a new contract broke down...

Chelsea want to streamline their squad over the summer, despite winning the UEFA Champions League last season. The Blues reached the finals of the FA Cup too but ended second-best to a spirited Leicester City side. Thomas Tuchel inspired a fourth-place finish in the Premier League and will be aiming for top spot in the upcoming campaign.

As it happened: Chelsea 2-2 Tottenham Hotspur

A big thanks to everybody who was following Chelsea vs Tottenham along with me! A very exciting match and it was a privilege to bring it to you. Don't forget to check out VAVEL for the latest sporting news and the best reaction to that sporting news. Good night!. 21:515...

Chelsea will parade the Champions League trophy for the first time since being crowned European champions in May ahead of next month's friendly against London rivals Tottenham. Chelsea are hosting Spurs in front of what the club hope will be a near-capacity crowd at Stamford Bridge on August 4. Ahead...

Chelsea goalkeeper Kepa Arrizabalaga has discussed his emotions following Chelsea's Champions League win last season. The Spaniard had to watch from the bench as the Blues lifted Europe's elite trophy but shared just as much joy as if he was starting. Speaking to theplayerstribune.com, Kepa spoke about how he felt...

MADRID (AP) — A Spanish judge on Tuesday issued a preliminary ruling stopping FIFA and UEFA from taking any immediate action or making statements against the Super League. The ruling from a mercantile court in Madrid said the soccer governing bodies must refrain from “directly or indirectly” hindering the creation of the breakaway European league — and came hours before the six English clubs involved in the project pulled out and left the competition in limbo.