‘Either you are in or you are out’: Gianni Infantino says Fifa ‘strongly disapprove’ of Super League 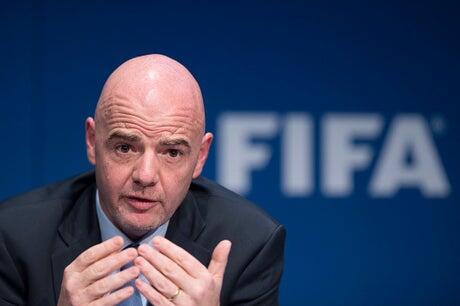 Gianni Infantino has reiterated and made clear that Fifa , the world’s governing body for the sport of football, are firmly against the European Super League plans which have dominated headlines over the past 48 hours.

While the outpouring of anger and emotion has in several cases been instantaneous and with the game as a whole in mind, it has also in other cases been rather more self-serving and predictable, with certain bodies fearful and looking to protect their own interests. Fifa, however, stands above the individual components of the argument in theory: they neither directly run the competitions which stand to lose out nor are responsible for the changes within them. For Infantino to then declare his organisation firmly against the Super League proposals should serve to underline both the nature of how fundamental a break the new competition would be, and also to make it clear to the clubs involved that, if they proceed, they would stand alone.

Talking about the “terrible words” linked with the game “which should give joy to everyone”, the president reminded clubs to gain long-term perspective, not just for the future but for the past which has built the sport into what it is today.

“Of course I am speaking about this Super League project,” he said at the Uefa Congress. “Let me be extremely clear: Fifa is an organisation which is built on values. The values, the true values of sport. On the statutes which define the institutional framework, with the pyramid, the leagues, associations, clubs and players.

“At Fifa we can only strongly disapprove the creation of the Super League, a Super League which is a closed shop, a breakaway from the current institutions. Which is outside of the system. There is no doubt whatsoever of Fifa’s disapproval.

“There is a lot to throw away for maybe a short-term financial gain of some. People need to think very carefully. They need to reflect, and assume responsibility. They need to think not only of their shareholders but of all the people. Of all the fans. Of all those which have contributed to create what European football is today.”

The Fifa president continued to make the point that there was a culture and foundation to the sport which required protecting.

Conversely, if clubs - the 12 founders and any who followed - decided to break with those traditions and pursue their own path, they would “be responsible” for the outcomes and there would be no half-measures, which seemed to allude to either the clubs being in the established leagues and competitions entirely, or in their own - not a mix-and-match combination.

“It goes back decades, more than a hundred years. People with love, with passion, with commitment have created all this. We need to protect this. It’s my task as Fifa president, it’s your task in Uefa, to protect the European model. To protect clubs, national teams.

“If some go their own way they need to be responsible for their choice.

“Concretely, either you are in or you are out. You cannot be half in and half out. Everyone has to think about this and this has to be absolutely clear.

“But I don’t want to even think like that. Like Uefa, Fifa is a democratic organisation. Everyone can speak. They are all taken into account, always with respect of the institutions, leagues, associations. With respect for the history. With respect of the passion of so many people around the world.”

As Infantino pointed out, Fifa is similar to Uefa in some regards - and for many in the football world that would go for the drawbacks and limitations to their work, as much as the positives.

But for the two to side together against the Super League plans represents a major obstacle for those determined to push through and form the breakaway competition.

The Athletics Federation of Nigeria took full responsibility for the mishap, while 10 athletes from five other countries have also been ruled out.

The stars are said to have been frustrated by the office's slow speed to solve financial problems. Up to 10 players at Football Kenya Federation Premier League side Gor Mahia are secretly engaging other clubs in bids to secure transfer moves, Goal understands. A source close to the club has...

FIFA 22: Everything you need to know

FIFA 22 has been confirmed, with PSG star and France international Kylian Mbappe once again taking centre stage on the game’s cover. EA hasn’t revealed a great deal of information about FIFA 22 just yet, although we do know that Alex Scott will become the very first English-speaking female commentator in the game, while the new HyperMotion Technology will help to create more realistic animations.

6 things you need to know about FIFA 22

EA’s annual soccerfest has just been unveiled. But what’s new this year?. With the Euros over, another year of hurt added to England’s tally, and the new Premier League season just around the corner, that can only mean one thing: there’s a new FIFA on the way. FIFA 22 will...

Which of the continent’s stars have shone so far at the Games in Tokyo?. With the group stage games across the men and women’s section done and dusted, Goal pick out Africa’s best players so far. Barbra Banda. No doubt the continent’s finest player so far, the Zambia forward thrived...

New plans being worked on for a European Super League involve the competition being 100 per cent open, with no clubs holding permanent membership, the PA news agency understands. A statement from the three clubs which still endorse the hugely controversial project – Real Madrid Barcelona and Juventus – released...

Rebel clubs to press on with Super League after court ruling

MADRID (AP) — Barcelona, Juventus and Real Madrid vowed to press on with the European Super League project on Friday after a court ruled against what the clubs called “UEFA’s threats.”. A Spanish court on Friday threw out an appeal by UEFA against the decision this month to unwind the...

The Brewers are expected to focus on domestic assignments as they hope to seal the league title next month. Kenya will not have a representative in the upcoming Cecafa Kagame Cup scheduled to take place next month in Tanzania after the withdrawal of Tusker. The Brewers were the only team...

Barcelona, Juventus and Real Madrid have vowed to carry on with plans for a European Super League after winning an important court battle with UEFA. A court in Madrid has ruled that the governing body’s disciplinary proceedings against the founding 12 clubs of the proposed breakaway league must be scrapped, while the case will now be assessed by European Court of Justice in Luxembourg.

Real Madrid, Barcelona and Juventus are to pursue the Super League after a victory in court. The three European powerhouses failed to pull out of plans in April after the other nine clubs involved in the scheming admitted defeat following fan outrage at the proposal. Manchester United, Manchester City, Liverpool,...

Berekum Chelsea smashed the record in 2010/11 to win the Ghana Premier League with 57 points with a remarkable winning ratio. The Blues paraded the likes of Ernest Sowah, Edward Kpodo, Abdul Basit, Eric Agyemang, Yaw Alexander, Jordan Opoku, Solomon Asante and Jackson Owusu in the season and went on to win their first Premier League title. Chelsea entertained millions of fans with their high pressing entertaining football that had Basit and Jordan playing behind Nana Poku in attack.

On Thursday, Qatar was defeated in the Concacaf Gold Cup semifinal to the United States. Despite the loss, the Qatar national team impressed a lot of neutrals during the tournament with their positive, attacking play and fast pace. With the World Cup taking place in Qatar next year, the semifinal...

Brazil, Dani Alves, Olympic Games, FIFA World Cup, Diego Alves, André Jardine, Lionel Messi, Renan Lodi, Guilherme Arana, association football at the Summer Olympics. As one of the trio of senior players on Brazil's squad at the Olympic men's football tournament at the 2020 Tokyo Games, Dani Alves is three wins from his 44th career title. Get past Egypt on Saturday, either South Korea or Mexico on Tuesday and then win Saturday's final at Yokohama Stadium, and the 38-year-old right-back will have an Olympic gold medal to add to his collection.

Theophilus Anobaa is in history as the player whose goal handed Medeama SC their first major silver ware in the history of Ghana Football. The winger smashed home from close range to win the day for the mauve and yellows against Asante Kotoko at the Accra sports stadium – to give them their first major title. Two years on – the two sides met again in the final, this time at the Essipong stadium in Sekondi.

'The whole thing is a bit of a JOKE': LaLiga chief Javier Tebas continues to slam European Super League plans... but gives rebel clubs Real Madrid, Barcelona and Juventus some credit for wanting to work with the game's governing bodies

LaLiga president Javier Tebas said the idea of a Super League remains 'a bit of a joke', but he gave the rebel clubs some credit for suggesting they want to work with the game's authorities in their latest statement. Real Madrid, Barcelona and Juventus indicated their intention on Friday evening...

The idea of a Super League remains “a bit of a joke” to LaLiga president Javier Tebas but he gave the rebel clubs some credit for suggesting they want to work with the game’s authorities in their latest statement. Real Madrid, Barcelona and Juventus issued a communique on Friday evening...

The Mexican Men's Football team is only two wins away from securing their second Gold Medal in the Olympic Games in the past nine years. It has been an incredible team effort so far, but without a doubt, the player who has showed he's capable of playing in any league in the world is the striker, Henry Martín.

How much will THE Ultimate Team actually cost you to assemble in FIFA 21?

This is how many coins you need to put together the ultimate XI. Much has been made about the attainability of the top-rated cards in Ultimate Team this season, but just how much will the best team cost you in FIFA 21 now?. We have put together what we think...

Chelsea attacker Hakim Ziyech continues to remain a top target for AC Milan this summer, Calciomercato reports. The Rossoneri have formed a good working relationship with the Blues, having already signed Fikayo Tomori and Olivier Giroud on permanent deals. Ziyech has now emerged as their top target to play behind...

AC Milan are not giving up on their pursuit of Chelsea playmaker Hakim Ziyech. The creative winger, who can play across the front line, enjoyed a decent first season at the Stamford Bridge club. But Ziyech was not always first choice, and Calciomercato reports that Milan are very eager to...