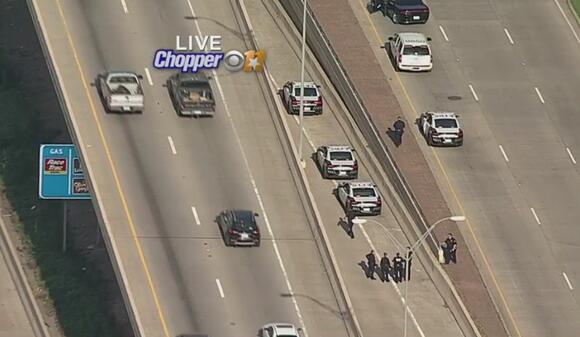 UPDATE: Police identified the suspect on Tuesday as Edgar Luis Tirado, 28, after next of kin was notified.

Chief Garcia said the officers fired at the man when he pointed what turned out to be a fake gun at them.

No officers or bystanders were hurt.

Chief Garcia said officers first responded to a report of an attempted carjacking by an armed man in Far North Dallas around 4 p.m.

Officers had a confrontation with the man, Chief Garcia said, when the suspect pulled out a handgun before running off.

Officers set up a perimeter, and around 5:15 p.m. an armed robbery was reported at a CVS in the 13000 block of Coit Road, less than a mile south from the first incident. The robber matched the description of the man in the carjacking, Chief García said.

The man ran out the back of the CVS.

After running across I-635, the suspect then ran to the eastbound service road of 635 and encountered officers.

The suspect pointed his handgun at the officers, resulting in officers shooting at and striking the suspect, ultimately killing him, Chief Garcia said.

The man’s identity has not yet been released.

It was later determined his gun was a replica gun.

wait doesn't replica mean that it looks real. That sounds to me like a guy who wanted to die. Hell if you point a gun at me and I think it's real I'm going to shoot you too.

When a person of color gets shot it's national news When a white person gets shot it's only local news. The press likes rioting because it helps their ratings. The news is supposed to be impartial, instead they take the side that raises their viewership.

WARNER ROBINS, Ga. — A Georgia woman is dead and another is charged with murder after police say the pair tried to rob two men they were in a car with. Warner Robins police officers say they were called to the 100 block of Fred Drive early Sunday morning to a call of a person being shot.
GEORGIA STATE・5 DAYS AGO
NBC Dallas-Fort Worth

A woman is dead and a 62-year-old man is charged with murder after a shooting in Dallas' Cedar Crest neighborhood on Monday morning, police say. The shooting happened in the 2300 block of Alabama Street at about 10 a.m., Dallas police said. Police said when officers arrived they found a...
DALLAS, TX・6 DAYS AGO
KGUN 9 Tucson News

One person is dead following a confrontation that happened in Tucson, police say.
TUCSON, AZ・6 DAYS AGO
NBC Dallas-Fort Worth

One man is dead after a shooting in Dallas on Thursday night, police say. According to the Dallas Police Department, the incident occurred at 1300 Audelia Road at approximately 10:45 p.m. Police said apartment residents heard gunfire and called 911. When officers arrived, they found a male victim between the...
DALLAS, TX・3 DAYS AGO

Dallas police are asking for help identifying and locating a man who opened fire at a gas station on October 2, injuring one person. Katie Johnston reports.
DALLAS, TX・14 DAYS AGO
CBS DFW

DALLAS (CBSDFW.COM) – Dallas police are searching for a Black male suspect who witnesses said shot and killed Kendrick Johnson, 18, on Oct. 6. Officers found Johnson just before 3:30 p.m. in the 400 block of N. Denley Drive. He was lying on the sidewalk and had been shot numerous times.
DALLAS, TX・11 DAYS AGO
tucson.com

Tucson police have identified a gunman who was fatally shot by an officer this week outside a Tucson business. About 4 p.m. Tuesday, police say they confronted Donte Lorenzo Laster, 23, following calls about a man firing a gun in the 100 block of East Fort Lowell Road, near North Stone Avenue.
TUCSON, AZ・11 DAYS AGO
Shore News Network

18-Year-Old Shot and Killed in Dallas

DALLAS, TEXAS – On Monday, October 11, 2021, at approximately 12:19 a.m., Dallas police responded to a shooting call at the Canterbury Crossing Apartments, located at 10500 Lake June Road. The male victim, 18-year-old Christen Ade Heath, was found lying on the floor in an apartment with multiple gunshot wounds. Dallas Fire-Rescue responded and pronounced him deceased at the scene. The motive and circumstances surrounding this murder are under investigation.
DALLAS, TX・6 DAYS AGO

A 56-year-old man is dead after a crash in Dallas on Saturday morning. According to the Dallas Police Department, the incident occurred in the 9900 block of Garland Road at approximately 12:18 a.m. Police said a gray 2021 Chevrolet Silverado was traveling southbound at a high rate of speed and...
9 DAYS AGO
Dallas News

A man died after he was shot in the chest with an airsoft rifle Sunday night in northwest Dallas. Officers were dispatched about 10:45 p.m. to an apartment in the 9400 block of Larga Drive, near Webb Chapel Road and Loop 12, where they found Jose Manuel Lara Gonzalez. Lara,...
DALLAS, TX・6 DAYS AGO
foxsanantonio.com

ALAMO, Ga. (WKRC/CNN Newsource) - A manhunt is under way for a suspect in the shooting death of a Georgia police officer. 26-year-old Dylan Harrison was gunned down early Saturday morning while working his first shift for the Alamo Police Department. Authorities have not released details of what led to...
ALAMO, GA・8 DAYS AGO
Shore News Network

Man Shot and Killed on Military Parkway in Dallas

DALLAS, TEXAS – On Wednesday, October 13, 2021, at 6:12 p.m., Dallas Police responded to a shooting call at Norvell Courts Apartments, located at 8008 Military Pkwy. Dallas Fire-Rescue transported the victim Keyviontay Winston, a 22-year old black male, to a local hospital, where he was pronounced dead. The victim suffered from multiple gunshot wounds. The motive and circumstances surrounding the murder are under investigation.
DALLAS, TX・3 DAYS AGO

A 50-year-old man was shot to death Thursday night at an apartment complex in Far Northeast Dallas, police said. The shooting happened at Estansia Apartments on Audelia Road, near Walnut Street and Dallas College Richland Campus. Police responded to the complex shortly after 10:30 p.m. and found Kerwin Martin unresponsive in the parking lot and he was pronounced dead.
DALLAS, TX・3 DAYS AGO
News Channel 3-12

This is the second officer-involved shooting of 2021 in Lompoc, police said. The post Man shot, killed by Lompoc police identified appeared first on NewsChannel 3-12.
LOMPOC, CA・6 DAYS AGO
whdh.com

PROVIDENCE, R.I. (AP) — A man apparently trying to fight off an armed robber inside a Providence laundromat has been shot and killed, police said. The victim, described only as a man in his 30s, was shot inside the Broad Street business at about 8 p.m. Tuesday. “The suspect walked...
PROVIDENCE, RI・5 DAYS AGO
KTVU FOX 2

OAKLAND, Calif. - A man shot and killed by the FBI last month in Oakland was wanted on several warrants, two of which were out of the Hayward Municipal Court, the FBI said Wednesday. Michael Jonathan Cortez was killed by an FBI agent Sept. 13, in the 2500 block of...
OAKLAND, CA・11 DAYS AGO

An armed customer witnessing a robbery at a Texas fried chicken restaurant last week sprang into action — fatally shooting one gun-toting suspect and wounding the other, reports said. The wild scene unfolded at Church’s Chicken in Port Arthur at about 8:45 p.m. Friday, KDFM reported. The duo of crooks...
TEXAS STATE・14 DAYS AGO
FOX 13 Memphis WHBQ

MEMPHIS, Tenn. — A man was shot and killed Sunday afternoon in Memphis. MPD said they responded to a shooting at 2:53 p.m. in the 3900 block of Knight Arnold. The victim was pronounced dead at the scene. MPD said the suspect is a light-skinned man with light brown long...
MEMPHIS, TN・14 DAYS AGO