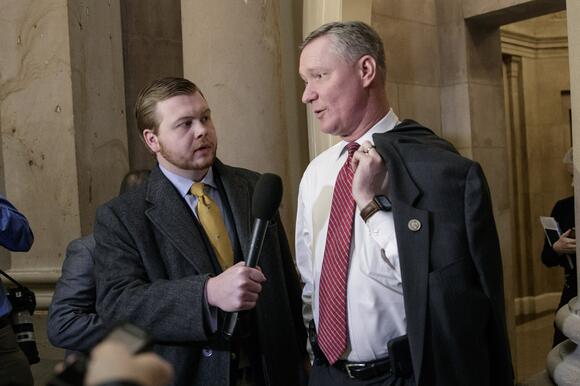 WASHINGTON (AP) — Rep. Steve Stivers of Ohio, the former campaign chair for House Republicans, announced on Monday that he’s stepping down next month to oversee his home state’s chamber of commerce.

Stivers has been serving in the House since 2011 and enjoys strong ties with GOP leadership. He had been viewed as a potential candidate to run for the seat held by Republican Sen. Rob Portman, who’s retiring at the end of 2022.

Instead, Stivers, 56, is leaving Congress effective May 16. The Republican said that he has focused his time in Washington on economic policies and “that is why I am looking forward to this new opportunity with the Ohio Chamber of Commerce, where I can continue my efforts to support free enterprise and economic growth here in Ohio.”

Stivers was chair of the National Republican Congressional Committee in 2018, a challenging midterm election year when Republicans lost the House majority. Democrats framed the election as a referendum on then-President Donald Trump and swept to victories across the country.

Currently, Democrats hold a 218-212 edge over Republicans in the House, and there are five vacancies. Stivers represents a Republican-leaning district that the GOP will be favored to keep when a special election occurs. He would have been in a strong position financially to retain the seat next year, having raised nearly $1.4 million in the last fundraising quarter.

Stivers served as a state senator before running for Congress. In the House, he’s served on the Financial Services Committee.

Former House Speaker Nancy Pelosi reacts to some GOP members heckling Biden during his State of the Union address, calling it "showbiz" to cover putting Medicare and Social Security "on the table."
19 HOURS AGO
The Guardian

Slide 1 of 41: In the latest threat to Donald Trump's 2024 campaign, a major US political donor has just signaled that he won't be backing the former POTUS's next presidential bid. And political support might not be the only thing Trump is losing. Read on for the full surprising story. All dollar values in US dollars.
2 DAYS AGO
Newsweek

JACKSON, Miss. (AP) — The Republican-controlled Mississippi House on Tuesday passed a bill to create a new court district in part of the capital city of Jackson with judges who would be appointed rather than elected. Black Democrats pushed back vociferously against House Bill 1020 during a nearly five-hour debate, arguing the measure unconstitutionally strips voting rights from many residents in the majority-Black city. “Don’t create a city within the city,” Democratic Rep. Bryant Clark of Pickens implored the House. House Ways and Means Committee Chairman Tray Lamar, a Republican from Senatobia, sponsored the bill. He told the House that a new court system would help deal with a backlog of criminal cases, including a large number of homicides.
MISSISSIPPI STATE・20 HOURS AGO
The Associated Press

LITTLE ROCK, Ark. (AP) — Arkansas Gov. Sarah Huckabee Sanders proposed on Wednesday an overhaul of the state’s schools that will pair a 39% raise in starting teacher pay with a new voucher program that will direct public money to pay for private and home schooling. Sanders also...
ARKANSAS STATE・1 HOUR AGO
The Associated Press

JACKSON, Miss. (AP) — Black lawmakers in Mississippi are denouncing efforts by the majority-white and Republican-led state Legislature to grab power from the majority-Black and Democratic-led capital city of Jackson. “The actions being taken by our legislative leadership amount to a symbolic decapitation of Black elected leadership,” Democratic Sen....
JACKSON, MS・39 MINUTES AGO
The Associated Press

HELENA, Mont. (AP) — More than two dozen Republican Montana lawmakers are co-sponsoring a bill that would allow students to misgender and dead-name their transgender peers without punishment, a move that some argue would further the bullying of kids already struggling for acceptance. The proposal would declare that it’s...
MONTANA STATE・12 MINUTES AGO
The Associated Press

AUSTIN, Texas (AP) — Opal Lee, the 96-year-old Texan whose efforts helped make Juneteenth a federal holiday to commemorate the end of slavery in the U.S., became on Wednesday only the second Black person whose portrait will hang in the senate chamber of the state Capitol. Lawmakers gave a lengthy standing ovation for Lee, who two years ago stood next to President Joe Biden as Juneteenth officially became the first new federal holiday since Martin Luther King Jr. Day was created in 1983. She had organized walks in cities across the U.S. as part of her campaign to have June 19 recognized as a federal holiday. Lee was nominated for a Nobel Peace Prize in 2022. Her painting will join those of other celebrated Texas figures on the walls of the 135-year-old Capitol, where nearly a dozen Confederate markers remain in and around the building. Lee, who is from Fort Worth and often called the “ grandmother of Juneteenth,” joins the late U.S. Rep. Barbara Jordan as the only two Black Texans to have portraits in the Senate chamber.
TEXAS STATE・46 MINUTES AGO
The Associated Press

Biden 2024? Most Democrats say no thank you: AP-NORC poll

WASHINGTON (AP) — A majority of Democrats now think one term is plenty for President Joe Biden, despite his insistence that he plans to seek reelection in 2024. That’s according to a new poll from The Associated Press-NORC Center for Public Affairs Research that shows just 37% of Democrats say they want him to seek a second term, down from 52% in the weeks before last year’s midterm elections.
TEXAS STATE・2 DAYS AGO
The Associated Press

SANTA FE, N.M. (AP) — Legislators in New Mexico have proposed seven gun laws in a wide-ranging package of proposals. Members of a House committee want to establish a two-week waiting period for firearm purchases plus prohibit the sale and possession of certain semiautomatic rifles and handguns in the state.
NEW MEXICO STATE・51 MINUTES AGO
The Associated Press

HARRISBURG, Pa. (AP) — Pennsylvania is the latest state where the public school funding system was found to be unconstitutional, but the experience in other states suggests there’s no guarantee of swift, significant or longstanding change for the poorer school districts that sued in hopes of getting billions of dollars more for their budgets.
PENNSYLVANIA STATE・38 MINUTES AGO
The Associated Press

PHOENIX (AP) — Kyrsten Sinema won Democrats a U.S. Senate seat from Arizona for the first time in a generation thanks in no small part to unity in her party and division among Republicans. That Democratic unity of 2018 was on display again in the next two election cycles...
ARIZONA STATE・2 DAYS AGO
The Associated Press

WASHINGTON (AP) — When President Joe Biden suggested that Republicans want to slash Medicare and Social Security, the GOP howls of protest during his State of the Union address showcased a striking apparent turnaround for the party that built a brand for years trying to do just that. Biden...
WISCONSIN STATE・1 HOUR AGO
The Associated Press

ATLANTA (AP) — Georgia could convict more people of dogfighting-related crimes and send them to prison for longer stretches under a bill advancing in the state Senate. The Senate Public Safety Committee voted 6-3 Wednesday to approve Senate Bill 68, which would apply Georgia’s racketeer influenced and corrupt organizations law to dogfighting. Applying the state RICO law would result in prison sentences of five to 20 years for convictions, up from one to 10 years now. “I hope this will give our police and prosecutors a stronger tool to target these organized criminals,” said the bill’s sponsor, Republican Sen. Rick Williams of Milledgeville. The measure moves to the full Senate for more debate.
GEORGIA STATE・1 HOUR AGO
The Associated Press

JEFFERSON CITY, Mo. (AP) — Missouri K-12 public school teachers would face limits on how they talk about race and history under a bill approved Wednesday in the state Senate. The GOP-led Senate gave the measure initial approval in a voice vote. Another vote is needed to send the bill to the Republican-led House. The proposal is the latest of GOP-led efforts nationwide to push what supporters call parent’s rights and crack down on what some conservative politicians have dubbed “critical race theory.” Critical race theory is a way of thinking about America’s history through the lens of racism, which subscribing legal scholars say is systemic in the nation’s institutions. But it also has become a catchall phrase to describe concepts some conservatives find objectionable, such as white privilege, systemic inequality and inherent bias.
MISSOURI STATE・1 HOUR AGO
The Associated Press

SPRINGFIELD, Ill. (AP) — For all the fanfare and the legal rigmarole of Illinois’ ban on semiautomatic weapons, it might come as a surprise to learn the legislation was titled “Insurance Code-Public Adjusters.”. To thousands of gun owners and merchants who filed lawsuits over it, the title...
ILLINOIS STATE・1 DAY AGO
The Associated Press

WASHINGTON (AP) — The State of the Union address tends to have a ritual rhythm. Grand entrance. Applause. Platitudes. Policies. Appeals for Unity, real or imagined. President Joe Biden checked those boxes, and a few more, during his speech to a joint session of Congress on Tuesday night. In part, he seemed to be laying the foundation to run for a second term. “We’ve been sent here to finish the job,” he said.
TENNESSEE STATE・20 HOURS AGO
The Associated Press

NASHVILLE, Tenn. (AP) — One of Tennessee’s most influential Republican lawmakers says the state should stop accepting the nearly $1.8 billion of federal K-12 education dollars that help provide support for low-income students, English learners and students with disabilities. House Speaker Cameron Sexton told The Associated Press that he has introduced a bill to explore the idea during this year’s legislative session and has begun discussions with Gov. Bill Lee and other key GOP lawmakers. “Basically, we’ll be able to educate the kids how Tennessee sees fit,” Sexton said, pointing that rejecting the money would mean that Tennessee would no longer have “federal government interference.” To date, no state has successfully rejected federal education funds even as state and local officials have long grumbled about some of the requirements and testing that at times come attached to the money. The idea has also come up elsewhere in recent months among GOP officials, including in Oklahoma and South Carolina.
TENNESSEE STATE・4 HOURS AGO