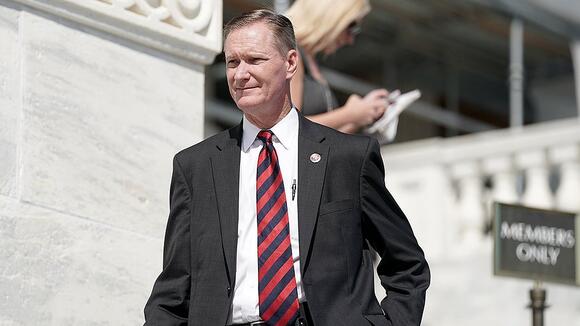 Rep. Steve Stivers (R-Ohio) announced on Monday that he plans to retire in May to accept a position as president and CEO of the Ohio Chamber of Commerce.

"For the past decade, it has been my honor and privilege to serve the people of Ohio's 15th Congressional District. Throughout my career, I've worked to promote policies that drive our economy forward, get folks to work, and put our fiscal house in order," Stivers, 56, wrote on Twitter.

Stivers said his last day in Congress will be May 16.

"I'm excited to announce that I will be taking on a new opportunity that allows me to continue to do that. Effective May 16, I will be leaving Congress in order to accept the position of President and CEO of the Ohio Chamber of Commerce," he added.

Stivers, who chaired the National Republican Congressional Committee (NRCC) during the first two years of former President Donald Trump ’s tenure in the White House, has represented Ohio’s 15th District, which includes parts of Columbus, since 2011.

His early retirement is likely to set off a special election to replace him. It would be the state’s second special election of 2021. Voters in Ohio’s 11th District are set to choose the successor to former Rep. Marcia Fudge (D-Ohio) in November. Fudge stepped down from her seat last month after she was confirmed as President Biden ’s secretary of Housing and Urban Development.

But Stivers’s decision to leave public office shakes up the state’s closely watched Senate race. The six-term congressman was seen as a potential hopeful for the GOP nomination for Portman’s seat and would have entered the contest as a top-tier candidate.

The Republican Senate field in Ohio is emerging as a crowded one. Among the candidates who have already jumped into the race are former state Treasurer Josh Mandel, former Ohio GOP chair Jane Timken, GOP fundraiser Mike Gibbons and businessman Bernie Moreno.

Several others are still considering whether to run, including Rep. Mike Turner (R-Ohio) and author and venture capitalist J.D. Vance.

Former House Speaker Nancy Pelosi reacts to some GOP members heckling Biden during his State of the Union address, calling it "showbiz" to cover putting Medicare and Social Security "on the table."
18 HOURS AGO
msn.com

Slide 1 of 41: In the latest threat to Donald Trump's 2024 campaign, a major US political donor has just signaled that he won't be backing the former POTUS's next presidential bid. And political support might not be the only thing Trump is losing. Read on for the full surprising story. All dollar values in US dollars.
2 DAYS AGO
The Guardian

Former President Trump and former New Jersey Gov. Chris Christie (R) sparred online Sunday after Christie predicted that Trump couldn’t beat President Biden if they run against each other in the 2024 presidential election.  Christie, who endorsed Trump in 2016 after dropping his own campaign for the presidency but has since become a vocal Trump…
NEW JERSEY STATE・3 DAYS AGO
The Hill

MSNBC pundit Joe Scarborough mocked Republicans for their outbursts during the State of the Union address on Tuesday night, saying the displays made President Biden come off as stronger than he would have otherwise. “Can’t anybody play this game?” Scarborough asked while doubled over his desk early Wednesday on “Morning Joe.” “Why is my former…
11 HOURS AGO
The Hill

Rep. Nancy Pelosi (D-Calif.), the former Speaker, said Republican heckling of President Biden during the State of the Union address Tuesday evening was “showbiz.”  Several members of the Republican conference shouted out at Biden during his speech, notably when he accused some in the GOP of wanting to “sunset” Medicare and Social Security, or requiring…
11 HOURS AGO
The Hill

For nearly two years, Sarah Huckabee Sanders served as the voice of the Trump administration. On Tuesday night, the now-Arkansas governor will serve as the voice of the entire Republican Party, giving its official response to President Biden’s State of the Union address. Sanders, who left her position as White House press secretary in July…
ARKANSAS STATE・1 DAY AGO
The Hill

Julián Castro: Latest Trump-Biden poll ‘should be worrisome’ for Democrats

Correction: A previous version of this story inaccurately described a previous position held by Castro. Former Obama Cabinet member Julián Castro said recent polling that shows President Biden lagging behind former President Trump in a potential 2024 rematch should raise some eyebrows in the Democratic Party. An ABC-Washington Post poll this week showed that Trump…
2 DAYS AGO
The Hill

Rep. James Clyburn (D-S.C.) said he believes President Biden’s State of the Union address on Tuesday was the start of his 2024 reelection bid.  Clyburn, the House assistant Democratic leader and former House Democratic whip, said in an interview on “CNN This Morning” that he thought the speech was the “best effort” he has seen from…
9 HOURS AGO
The Hill

Three officials of the Biden administration are serving in their positions unlawfully because they have exceeded the amount of time officials can use the “acting” title, the Government Accountability Office (GAO) determined on Wednesday. The positions — the acting controller at the Office of Management and Budget, the acting director of the Department of Justice’s…
1 HOUR AGO
The Hill

The editorial board of The Wall Street Journal is arguing President Biden is benefiting from Republican struggles on messaging and governance, despite his sagging poll numbers. The Journal, in an editorial published early Wednesday, noted Biden devoted much of his State of the Union address Tuesday evening touting what he says is a long list…
10 HOURS AGO
The Hill

Rep. Marjorie Taylor Greene (R-Ga.) on Monday called for a probe into why former President Trump was apparently not informed of previous Chinese surveillance balloons that Biden officials are saying crossed over the U.S. at least three times during the previous administration. “If it’s true the Pentagon purposely did NOT tell President Trump of Chinese…
2 DAYS AGO
The Hill

The post-midterm honeymoon President Biden experienced in recent months could be coming to an end.  Biden experienced a boost following the midterm elections with a better-than-expected outcome that had Democrats holding their Senate majority and losing the House — but keeping their losses down. The president has also been bolstered by record-high jobs numbers and…
FLORIDA STATE・2 DAYS AGO
The Hill

Psaki on reports of Melania Trump in the Situation Room: ‘This is not normal’

Former White House press secretary Jen Psaki said in response to reports that former first lady Melania Trump entered the Situation Room during a 2019 raid against ISIS that “this is not normal.”  “No, this is not normal. I think it’s important to restate that as much as possible around Trump,” she said on MSNBC’s…
1 DAY AGO
The Hill

Poll: majority of Black voters think Biden should run in 2024

Correction: This story has been updated to clarify that Rep. Ruben Gallego is accusing Sen. Krysten Sinema of not applauding President Biden’s Medicare comments. A spokesperson for the senator has said she did applaud. Rep. Ruben Gallego (D-Ariz.) accused Sen. Kyrsten Sinema (I-Ariz.) of not applauding President Biden during the State of the Union address…
ARIZONA STATE・19 HOURS AGO
The Hill

Americans remain pessimistic about the economy despite huge job growth and cooling inflation. A slew of recent polls reveal that Americans are still struggling with high costs and aren’t convinced that the U.S. can stave off a recession as the Federal Reserve takes steps to slow the economy down.  That presents a challenge for President…
1 DAY AGO
The Hill

State of the Union shouting: What lawmakers yelled out

As President Biden delivered his second State of the Union address on Tuesday night, a number of lawmakers made their thoughts known with shouts and heckles.  Speaker Kevin McCarthy (R-Calif.), after warning his members to not interrupt the president, visibly tried to quiet Republicans who yelled out in the middle of the address. ‘Close the…
19 HOURS AGO
The Hill

Santos on Romney’s criticism: ‘It wasn’t very Mormon of him’

Rep. George Santos (R-N.Y.) said Sen. Mitt Romney’s (R-Utah) comments to the first-term lawmaker during an exchange at the State of the Union address last night were not “very Mormon of him.” “It’s not the first time in history that I’ve been told to shut up and go to the back of the room, especially…
3 HOURS AGO
The Hill

President Biden drew a raucous response from Republicans during his State of the Union address on Tuesday night when he said some GOP lawmakers want to cut Social Security and Medicare. “Anybody who doubts it, contact my office. I’ll give you a copy of the proposal,” he said as Republican lawmakers jeered. Biden and Democratic…
UTAH STATE・52 MINUTES AGO