The Bengals Met With With Charleston Receiver Mike Strachan 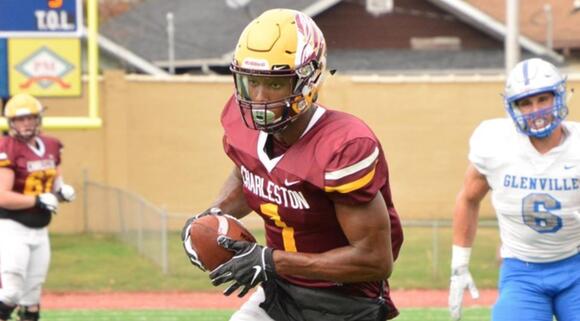 CINCINNATI — It's no secret that the Bengals need to add multiple wide receivers in the NFL Draft later this month.

With A.J. Green, John Ross and Alex Erickson signing elsewhere in free agency, Cincinnati needs to add at least one wide-out capable of starting and another developmental prospect at the position.

They met with Charleston wide receiver Mike Strachan on Thursday according to Justin Melo of The Draft Network.

He ran a 4.54-second 40-yard dash. Strachan isn't quick and shifty, but he's a big, fast target that could develop into a quality NFL player.

He earned first-team all conference honors as a sophomore (2018), finishing with 48 receptions for 1,007 yards and eight touchdowns. He averaged 21 yards-per-catch.

He was a first-team all conference selection again in 2019, finishing with 19 receiving touchdowns, which was third in all of Division II. He also had 78 receptions for 1,319 yards.

Charleston didn't have a football season in 2020.

Strachan has the size and speed to succeed in the NFL, but he'll need some time to make the leap from Division II to the pros. The Bengals could target him with one of their two sixth round picks on day three of the draft.

Watch some of his highlights below.

For the latest free agency news and NFL Draft coverage, bookmark AllBengals and check out some of our other articles below.

Does Maurice Hurst Make Sense for the Bengals?

Is a Number Change Coming for Tee Higgins?

A Breakdown of Giovani Bernard's Release: Why Now?

How Does Penei Sewell Compare to 2020 Offensive Line Draft Class?

The 2021 NFL Draft is behind us and the NFL schedule is out, meaning football fans can get excited about

Predicting How The AFC North Finishes

The AFC North should be once again a decently strong division in 2021. Cleveland and Baltimore are looked at as contenders in the AFC and even the Cincinnati Bengals should be improved. There are legitimate questions about the Pittsburgh Steelers, but they could be solid with everything going right. With...

The Highest-Paid NFL Players Ever, Ranked

Who's the top-earning NFL player of all time? Here's a hint: It's not Tom Brady, Peyton Manning or Aaron Rodgers. So, who is it?. We've assembled a countdown of the 50 biggest money-makers in NFL history, according to Spotrac data. Football and financial stats are current through the end of the 2020 season.

CINCINNATI — Bengals owner Mike Brown has watched plenty of quarterbacks over the years. From stars like Boomer Esiason and Ken Anderson to disappointments like Akili Smith—Brown has seen it all. The 85-year-old recently sat down with Dave Lapham to discuss his football life. Naturally, Lapham asked Brown about his...

This Bengals offensive lineman could be in danger of getting cut

Every NFL player should have a teammate who sings his praises like Cincinnati Bengals defensive tackle Mike Daniels does for quarterback Joe Burrow. Daniels, who appeared on “Good Morning Football” in March and said Burrow is “gonna be one of the great ones,” appeared again on the NFL Network show Thursday and compared Burrow to Green Bay Packers quarterback Aaron Rodgers.

Cincinnati Bengals need to reach out to Justin Houston

Surprisingly, the Cincinnati Bengals didn’t upgrade their linebacker corps this offseason. They signed Joe Bachie around OTAs but that move didn’t exactly thread the needle. The linebackers weren’t good in 2020 and considering not many changes were made, they probably won’t be good in 2021. There’s optimism surrounding second-year man...

Jun 15, 2021; Cincinnati, Ohio, USA; Cincinnati Bengals wide receiver JaÕMarr Chase (1) walks onto the field during minicamp at Paul Brown Stadium. Mandatory Credit: Katie Stratman-USA TODAY Sports. As the Cincinnati Bengals inch closer to the start of training camp, one position that could be the best in the...

CINCINNATI -- The Cincinnati Bengals and defensive end Sam Hubbard have agreed to terms on a contract extension, sources told ESPN's Adam Schefter. The Bengals signed the 2018 third-round pick to a four-year deal worth up to $40 million, sources said. Hubbard was entering the final year of his rookie contract.

How's it going everyone. I thought it would be good to have a fanpost about offensive tactics, and Chris's summer school article about spacing gave me the inspiration for this one. The idea of forcing the defence to cluster their players in a certain area reminded me of the weird play that Cincinnati ran against us in 2016. First, let's have a look at the play in question:

Cincinnati Bengals: Drew Sample on the verge of a breakout season

Cincinnati Bengals tight end Drew Sample (89) -Mandatory Credit: Joseph Maiorana-USA TODAY Sports. The 2021 season could see the Cincinnati Bengals offense take a significant leap. Joe Burrow is returning from injury and Ja’Marr Chase, his favorite weapon from his LSU days, is joining him in the Queen City. For...

CINCINNATI — The Bengals' offensive line is the biggest question mark entering 2021. They added key pieces like Riley Reiff and Jackson Carman this offseason, but was it enough to turn around one of the NFL's worst units?. Their plan may work, but even if it does, there's a decent...

Does Jordan Matthews Make Sense for the Bengals?

CINCINNATI — Veteran NFL wide receiver Jordan Matthews is hoping a position change will jump start his career. The seven-year veteran is transitioning to tight end this season. He's gained 15 pounds and is training with 49ers star George Kittle. Matthews will work out for NFL scouts at the HUB...

CINCINNATI — The Bengals are expecting to have an explosive wide receiver room this season. A year after adding Tee Higgins in the draft, they selected Ja'Marr Chase with the fifth overall pick in April. Throw in a two-time 1,000-yard receiver like Tyler Boyd and Cincinnati's offense should be dangerous.

ARLINGTON, TX - APRIL 26: NFL Commissioner Roger Goodell announces a pick by the Cincinnati Bengals during the first round of the 2018 NFL Draft at AT&T Stadium on April 26, 2018 in Arlington, Texas. (Photo by Ronald Martinez/Getty Images) The Cincinnati Bengals have been riding in darkness for the...

Here’s how much money Bengals received in national NFL revenue

The Cincinnati Bengals suffered a revenue decline last year, but the team’s share of national revenue rose despite the pandemic.