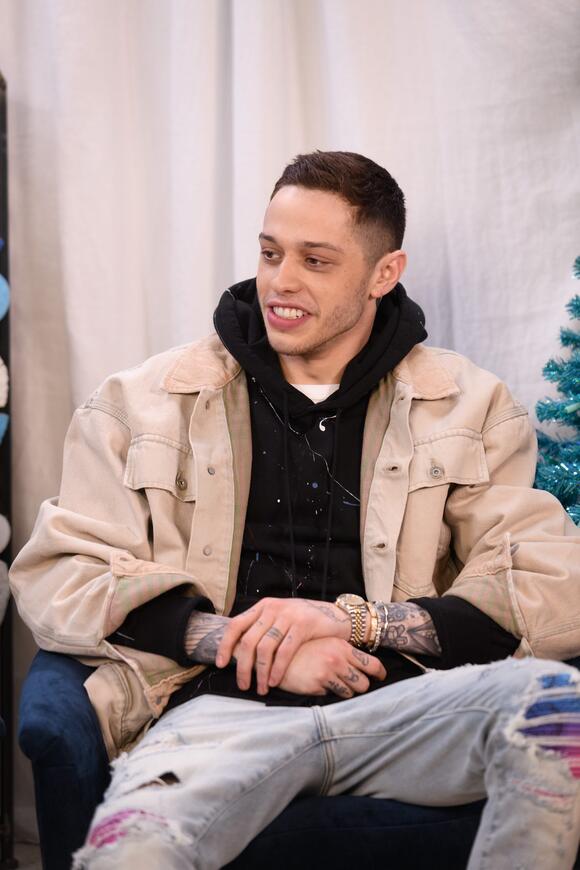 The "Saturday Night Live" comedian will star in "I Slept with Joey Ramone," a biopic recounting the life of The Ramones frontman, who established himself as an icon of the punk genre before his death from lymphoma in 2001.

Netflix announced the film in a press release Thursday, which also marked the 20th anniversary of Ramone's death. According to STX Films chairman Adam Fogelson, Davidson "is perfect for this role," and Mickey Leigh's memoir is "a great rock anthem that will make an equally great rock biopic."

"When you share a bed with someone – and not just a bed, but a childhood, a family, and a lifetime – you know that person better than anybody else," Fogelson added. "Mickey Leigh not only collaborated with his big brother’s band – he has irreplaceable memories of and insights into Joey Ramone, having supported him when no one else would and witnessed him overcome adversity in the most dramatic way."

Orley and Davidson previously worked together on the film "Big Time Adolescence" and on Davidson's Netflix standup special "Alive from New York."

As singer for The Ramones, arguably one the most influential U.S. band of the 20th century, Ramone and faux brothers Dee Dee, Johnny and Tommy shaped and motivated an entire generation of post-disco rockers from The Clash and the Sex Pistols to Nirvana and Pearl Jam to Green Day and The Offspring.

On the eve of releasing 1995 farewell album "Adios Amigos," Ramone told USA TODAY, "In the late '70s, there was Toto, Boston, Journey and Disco Duck. If you didn't sound like Meat Loaf or the flavor of the day, you didn't have a chance in hell. We'd play Philadelphia and visit the radio station — I don't know why, 'cause they never played us — and the program director would say, 'If you sounded more like the Doobie Brothers, we'd play you.' Ironically, now everyone sounds like The Ramones."

Earlier this year, it was announced that Saturday Night Live cast member Pete Davidson would be playing Joey Ramone in an upcoming Netflix biopic about the late Ramones legend. Speaking now with Billboard, Davidson reveals how he’s approaching the role. “I’m about to start music lessons and voice lessons and...

Pete Davidson Considering Moving To The U.K. To Be Closer To Phoebe Dynevor As ‘SNL’ Future Remains In Limbo

Ready to make a move: Pete Davidson is so head-over-heels for Phoebe Dynevor that a source says he’s ready to relocate to London full-time!. Davidson, 27, and Dynevor, 26, who were first linked in March, have been carrying on a long-distance romance while the funnyman films Saturday Night Live in New York and the Bridgerton star shoots season two of her smash series in England.

Report: Pete Davidson contemplating move to UK to be with Phoebe Dynevor amid ‘SNL’ hiatus

Pete Davidson and Phoebe Dynevor may be taking their relationship to the next level. Reports state that the SNL star is considering a move to the U.K. to be closer to his new love. Sources tell OK! magazine that since the sketch comedy show has been on hiatus, “Pete’s been...

Saturday Night Live’s Pete Davidson and Bridgerton’s Phoebe Dynevor were first linked together earlier this year. Now, one tabloid is saying the comedian is ready to leave Staten Island and the rest of the country behind to move to London to be with Dynevor. Gossip Cop investigates. Moving To London...

Just like magic, the luxurious apartment building Ariana Grande and Pete Davidson lived in during their short-lived engagement in 2018 is saying thank u, next and moving on to a new owner. The Grammy Award-winning singer, 28, and the SNL comedian, 27 — who began dating in May 2018, got...

Why is Pete Davidson so appealing to famous women?

The SNL star has been connected to Cazzie David, Ariana Grande, Kate Beckinsale, Kaia Gerber, Margaret Qualley and, currently, Phoebe Dynevor. "For me," says Megan Reynolds. "Davidson represents the kind of attainable, affable, dirtbag with a sensitive heart surrounded by years of unprocessed emotional trauma that have calcified into an unscalable wall. Some might call this affectation emotional immaturity or, rudely, a waste of time. For me, I see not quite a challenge, but someone who seems as prickly as I am about vulnerability—a kindred spirit. It’s not quite about Pete Davidson the person, but maybe, the idea of Pete Davidson: A man with baggage that isn’t so cumbersome that it can’t be unpacked, who will make me laugh but has also seen his share of darkness. But what of his appeal for everyone else, the unwashed masses drawn to his presumably unwashed stoner aura?"

Megan Fox and Machine Gun Kelly are still going strong. In fact, there's been chatter about that the couple is planning to get engaged once Fox's divorce from Brian Austin Green is finalized. While they've been gracing timelines and headlines with their coupledom, Fox has still faced criticism for dating someone younger than her.

“When They See Us” actress Suzzanne Douglas has died at the age of 64. A cause of death has not been revealed. On Wednesday, Douglas’ cousin Angie Tee broke the sad news on Facebook. She wrote, “Suzzanne Douglas a beautiful and talented actress made her transition today. She warmed our hearts on movie screens and television sets all over the world. This beautiful soul was my cousin.”

Sean and Dylan Penn star as a father-daughter duo in "Flag Day," which premiered at the Cannes Film Festival last week.

Danny Trejo has opened up about a time when he met Charles Manson while serving time in prison. In his newly released memoir Trejo, the actor confirmed that he met Manson in 1961, eight years before the Tate murders. Trejo was 17 at the time. “While I was waiting to...

Jeopardy! fans have wanted to see LeVar Burton host the show for a while now. In fact, days after Alex Trebek passed away, one fan started a petition to get Burton on the show. At the time of writing, over a quarter of a million people have signed the digital document. At the same time, this hosting gig has been Burton’s dream job for years. His stint as the host of Reading Rainbow proved his hosting prowess as well as his passion for education. He, and many others, see the job as the natural progression of his career.

Rick Aiello, the son of actor Danny Aiello, has died. He was 65. Multiple news outlets confirmed the tragic news about Rick, revealing the cause of death which he endured for a long time. According to his mother, Sandy, the actor lost his battle against pancreatic cancer after staying at...

Where is Kelly Ripa and why isn't she on Live with Kelly and Ryan?

Kelly Ripa has been absent from her TV hosting gig on Live with Kelly and Ryan over the last few days and fans want to know why!. The popular TV star has been temporarily replaced on the popular show leaving viewers scratching their heads. Ryan Seacrest sparked a reaction on...

Meghan McCain moves on! TV host lands first job since quitting The View - producing a Lifetime movie adaptation of a book that 'helped her through grief' - which will also mark Heather Locklear's return to the screen

Meghan McCain has yet to make her official exit from The View, but she has already lined up her next big project: producing the movie version of a book that 'helped her through her journey in grief' after the death of her father, US senator John McCain. The 36-year-old mother-of-one...