By Clémence Michallon
Posted by
The Independent
2021-04-14

Daniel Kaluuya is up for the Oscar for Best Supporting Actor for his portrayal of Fred Hampton in Judas and the Black Messiah , Shaka King’s biographical drama which chronicles the events that led to Hampton’s dead in a police raid.

Hampton, a community organiser and member of the Black Panther Party , died at the age of 21 in 1969 after 14 police officers raided his Chicago apartment.

Kaluuya told Stephen Colbert on 13 April that the role was a “real challenge” and a “big mountain” to climb.

The actor said that he came across Hampton’s story prior to working on the film and was struck by how young Hampton was at the time of his death, which left him wanting to take a closer look at his story.

Here are the real-life events that form the basis of Judas and the Black Messiah:

Hampton, a native of Summit, Illinois, was a charismatic community organiser and activist who became the chairman of the Illinois Black Panther Party (often referred to as “Chairman Fred”).

Founded in 1966, the Black Panther Party was a political organisation opposing racism and police brutality, which also ran community initiatives such as a free breakfast programme for schoolchildren. 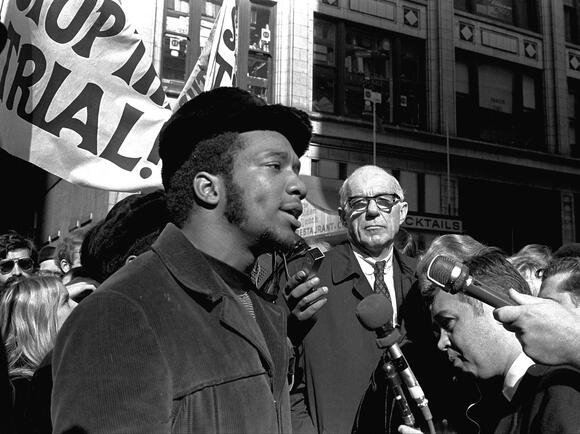 J Edgar Hoover, the FBI’s first director until his death in 1972, once deemed the Black Panther Party itself “the greatest threat to the internal security of the country”, as noted by The New York Times .

On 4 December 1969, before dawn, 14 police officers raided Hampton’s residence at 2337 West Monroe Street. More than 80 shots were fired; Hampton and Mark Clark, also a member of the Black Panther Party, both died.

No one involved in the raid was ever convicted of a crime. In 1982, the US government, the City of Chicago, and Cook County agreed to pay a $1.82m settlement to survivors of the raid as well as Hampton’s and Clark’s families, without admitting any wrongdoing.

Judas and the Black Messiah examines the story of William O’Neal (portrayed by Lakeith Stanfield, who is up for Best Supporting Actor alongside Kaluuya), who was an FBI informant in the lead-up to Hampton’s and Clark’s deaths.

As O’Neal recounted in a 1989 interview with the PBS programme Eyes on the Prize , he was around 19 years old when he was caught along with a friend stealing a car, after which he got a call from an FBI agent asking him to join the Black Panther Party. 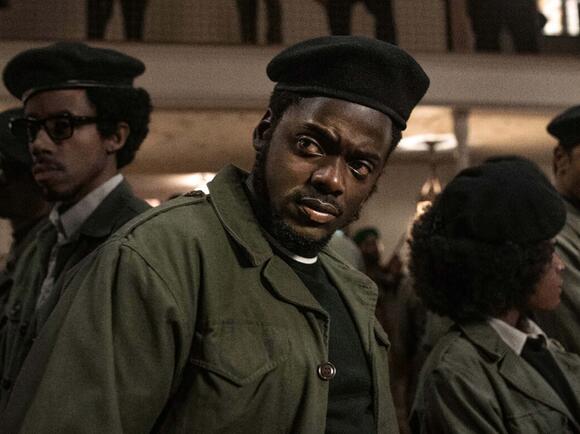 “Stealing a car and all of a sudden having the FBI, having a case with the FBI, the thought of really going to jail got my attention,” O’Neal said. “And, so when he asked me to join the Black Panther Party, and he used terms, he never used the word informant. He always said, ‘You're working for me,’ and I associated him as the FBI. So all of a sudden I was working for the FBI, which, in my mind, at that point, I associated with being an FBI agent. So I felt good about it. I felt like I was working undercover for the FBI doing something good for the finest police organisation in America. And so I was pretty proud.”

Referring to the raid in which Hampton and Clark were killed, O’Neal’s uncle told the Chicago Reader after O’Neal’s death in 1990 that O’Neal “never thought it would come to all this”.

If there was a perfect title for a Black horror film, it would be Nope. Thankfully, Jordan Peele has made the previous sentence a reality. Earlier today, the critically acclaimed filmmaker shared the first poster for his upcoming movie, Nope. In addition to sharing the poster, Peele also revealed that the film will star Keke Palmer, Steve Yeun and Daniel Kaluuya.

Jordan Peele has finally announced the title of his highly anticipated follow-up to 2019’s Us. In a simple post on Instagram, Peele unveiled the title of the film by sharing its poster. Entitled Nope, it’s set to arrive in theaters one year from now on July 22, 2022. As he previously revealed, Nope sees him reunite with his Get Out lead Daniel Kaluuya, who’ll be joined by Keke Palmer and Steven Yeun. The poster also teases that “select sequences” of the film were shot with IMAX cameras.

As another weekend rolls around, so does another batch of new movies and shows have touched down on Netflix, Amazon, and HBO Max – and there are plenty of new additions to keep you entertained from Friday through to Sunday. If you're planning a movie night for the weekend, you're in luck, from brand new releases to old favorites, there's plenty of choice on the streamers this week.

Based on a true story about the bullying of a gay teenager and its tragic consequences, the drama "Joe Bell" has a message to deliver. That message, which is good and necessary - urgent even - isn't simply the point of this well-meaning movie. It's the whole plot, which follows the teenager's father, played by Mark Wahlberg, as he undertakes a mission to raise awareness about the effects of homophobia by walking across America while giving speeches. But as delivered by this film and its titular main messenger, those words feels less vital than perfunctory, more preachy than truly, deeply felt.

Jordan Peele has signed up stars from The Walking Dead and Black Panther for his next horror movie. The Academy Award-winning writer and director has announced that the long-awaited directorial follow-up to his 2019 movie Us will be titled Nope, and will be released on July 22, 2022. A poster...

Rapper Gonzoe, Friend of Tupac is Dead at 45

Gonzoe the rapper -- a friend of Tupac and Ice Cube -- has been murdered. Police say Gonzoe was shot 3 times in the chest near a gas station in Seattle, Washington. The gunman is still at large and cops are on the hunt. The 45-year-old rapper -- real name...

When we see the name Taraji P. Henson, we can pretty much assume we're going to get a powerhouse performance. Whether she's a single mother, a detective or a NASA mathematician, Henson always brings her A-game to every project she joins. Now, there's a different work from the Empire lead...

Joseph C. Phillips AKA Martin from 'The Cosby Show' Is Proud Father of 3 Sons Who Are His Carbon Copies

Joseph C. Phillips of "The Cosby Show" fame is a proud father of three sons who look just like him. There is nothing he loves more than sharing lovely pictures of his beautiful moments with them. American actor Joseph C. Phillips is famous for portraying the character of U.S. Navy...

People love stories about serial killers, it’s hard to say why and it’s even harder to comprehend the true nature of it, but folks are drawn to these stories and as a result, so are the actors that take on the roles. There are plenty of serial killer movies that have little if anything to do with a real-life killer, but there are also quite a few that are based on true stories and take on a life of their own. Those stories are perhaps some of the most detestable and disturbing since there’s a possibility that such things really have happened and there is the reality that some of these things did happen in the past, and there were people out there that made them happen. That level of depravity is hard for a lot of people to understand since it tends to take a mind that’s well past the sane mark and a lot of people don’t want to admit that they can entertain such thoughts. But oh, do they enjoy watching the result that comes from such thinking since there are plenty of people that are more than happy to sit down and watch as someone emulates one serial killer or another on screen. In some cases, the actors are so good at what they’re doing that they give people chills. But at the end of the day, it has to be said that a lot of people have a touch of the sickness that it takes to get into this type of material, they just don’t want to own up to it.

Netflix users love a true-crime series, so when their brand-new offering, Heist, landed last week, TV fans lapped it up and the show's been sitting comfortably in the top ten ever since. The six part documentary series unpicks three different crimes that occurred in real-life with the help of the...

Lizzie Borden case: Images from one of the most notorious crime scenes in history

Over 100 years ago, Lizzie Borden was arrested and charged with the brutal murder of her father and stepmother. Here's a look at what police found at the scene and what transpired at her trial. "48 Hours" takes a new look at the case Saturday, July 31 at 9/8c on CBS.

The winners for the third annual African American Film Critics Association TV Honors were announced and Black excellence was on full display. According to The Wrap, HBO’s Lovecraft Country and Amazon’s The Underground Railroad were big winners. Lovecraft Country stars Jurnee Smollett and Jonathan Majors were honored with the top acting prizes. The Underground Railroad won for Best Limited Series and Best Director category for Barry Jenkins.

In May 1990, Robert Sedgwick should’ve been on top of the world. The 29-year-old actor had just booked a recurring gig on the ABC soap opera “One Life To Live.” He was making a grand a day, and though he considered soap operas “the lowest job in the acting food chain,” he was still grateful for the work.

A Black Panther 2 set video apparently includes a memorial for T'Challa – suggesting the character has died. In the video, which you can see below, there seems to be some writing adorning the pillars of the Wakandan set. Screen Rant did the work of translating the words, using a key from the MCU book The Wakanda Files. According to them, the inscription reads:

Spoilers ahead for Black Widow. CinemaBlend participates in affiliate programs with various companies. We may earn a commission when you click on or make purchases via links. Following some acclaimed TV series on Disney+, The Marvel Cinematic Universe finally returned to movie theaters with Black Widow. And now that Cate Shortland's blockbuster has been out for a few weeks, the cast and crew can finally open up about its contents. That includes Marvel Studios head Kevin Feige himself, who recently live-tweeted the Scarlett Johansson blockbuster and shared insider information about its production.

Biopics made about historical icons and pop culture celebrities make sense as these people usually have very interesting lives, and are perfect for melodrama even if it’s usually partially fictionalized. But then every once in a while we see a report or trailer on a new movie coming out based...

Is Turner and Hooch a True Story?

‘Turner & Hooch’ is a comedy-drama created by Matt Nix that tells the story of U.S. Marshal Scott Turner Jr. (Josh Peck), who inherits a dog after the mysterious and untimely death of his police detective father. Soon, the dog becomes a partner to Turner, and the two, with help from the rest of the Turner family, investigate the death of Turner’s father.