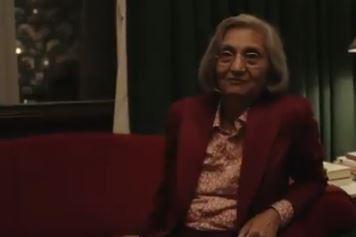 The new documentary, which premieres on April 22, is a sequel to the 2018 Netflix documentary Wild Wild Country, which focused on Bhagwan Shree Rajneesh, an Indian spiritual guru, known as Osho, who established a commune in the United States on a ranch in Wasco County, Ore., and his cult followers, especially Sheela Ambalal Patel, better known as MaAnand Sheela, devoted to him since age 16.

Ma Anand Sheela, who rose within the Rajneesh commune to spokesperson and "empress," pleaded guilty in the 1980s to immigration fraud, attempted murder, arson and poisoning 750 residents of The Dalles, Ore. by infecting restaurant salad bars with salmonella. She was sentenced to 20 years in federal prison, but was released in December 1988 on good behavior. After her time in prison, she moved to Switzerland where she bought two nursing homes. In 1999, she was convicted by a Swiss court of "criminal acts preparatory to the commission of murder" related to plot of kill U.S. federal prosecutor Charles Turner in 1985, but was sentenced to time served.

The Netflix sequel, Searching for Sheela, follows her as she returns to India for an interview tour in a documentary exploring who she really is.

"When I was an empress the kingdom was rosy," MaAnand Sheela says in an interview in the Netflix preview.

When someone asks her in an interview about Osho, she says, not only did she love him, but "he was also very much in love with me."

In photos: Blythe Danner turns 80: a look back

Actress Blythe Danner, best known for starring in the "Meet the Parents" trilogy, as Marilyn Truman on "Will & Grace," as Izzy on "Huff" and more, turns 80 on February 3, 2023. Here's a look back at her career through the years.
2 DAYS AGO
UPI News

Annette Bening will return to television in "Apples Never Fall," a new drama based on the Liane Moriarty novel.
2 DAYS AGO
UPI News

Oscar-winning filmmaker James Cameron has recreated a controversial scene from his classic film "Titanic" in the hopes of settling a long simmering debate.
2 DAYS AGO
UPI News

"1923," a Western drama starring Helen Mirren and Harrison Ford, will return for a second season on Paramount+.
1 DAY AGO
UPI News

Twice to release new EP 'Ready to Be' in March

K-pop stars Twice will release a new mini album, "Ready to Be," in March.
1 DAY AGO
UPI News

A Brazilian food company earned a Guinness World Record by assembling a line of 1,180 submarine sandwiches.
1 DAY AGO
UPI News

The Pakistan Telecommunications Authority is blocking access in the country to the free online encyclopedia Wikipedia, authorities confirmed Saturday.
18 HOURS AGO