Mark Zuckerberg's $23.4 million in security costs last year is more than the combined cost of keeping 10 other top execs safe 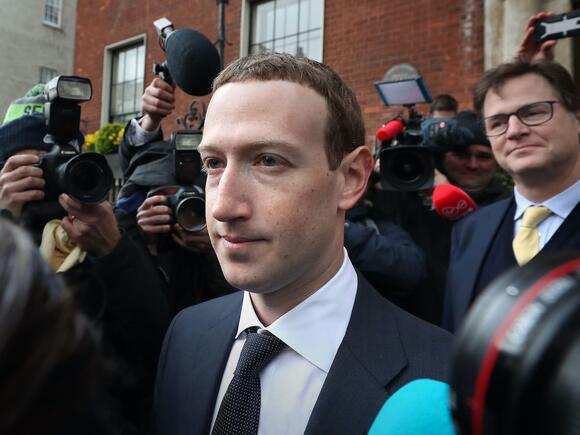 Facebook spent more than $23.4 million on security costs for CEO Mark Zuckerberg in 2020, according to the company's annual executive compensation report .

Zuckerberg receives a pre-tax annual allowance of $10 million for his family's security, and in 2020, Facebook spent an additional $13.4 million on personal security for Zuckerberg "at his residences and during personal travel pursuant to Mr. Zuckerberg's overall security program," the filing said.

In total, Facebook's expenditure is greater than the combined cost of providing security for ten other top tech execs, which an analysis of CEO security during the pandemic by Protocol tallied up to $23.3 million.

Facebook's Chief Operating Officer Sheryl Sandberg was the runner-up in the Protocol tally, with more than $7.6 million spent on her safety in 2020. Alphabet's Sundar Pichai came in third with $5.4 million.

Former Amazon CEO Jeff Bezos was compensated $1.6 million by his company for security, while he paid additional costs himself. Meanwhile, Uber paid $120,000 to set up CEO Dara Khosrowshahi's home office, and has assigned a security specialist to his house, Protocol reported .

In 2019 Facebook spent $20.4 million on protecting its founder , including $10.4 on personal security and the annual allowance of $10 million for his family's security. The company also spent $2.9 million on his private jets.

The $3 million rise in security spend from 2019 to 2020 was "primarily due to regular personal travel, costs relating to security protocols during the COVID-19 pandemic, increased security coverage during the 2020 US elections and other periods with increased security risk, and market increases in the costs of security personnel," Facebook said.

"Mr. Zuckerberg's role puts him in a unique position," the company wrote in the filing. "He is synonymous with Facebook, and as a result, negative sentiment regarding our company is directly associated with, and often transferred to, Mr. Zuckerberg."

Zuckerberg accepted a $1 salary from Facebook, as he has in previous years, and didn't receive any bonus payments or incentive compensation, the company said in the filing.

Facebook and other social media platforms faced a surge in misinformation on their sites when the pandemic started and the US elections kicked off. After former President Donald Trump falsely claimed that the election was stolen, including via his Facebook page, and triggered rioters to storm the US Capitol, the social media site suspended him indefinitely .

In March, Zuckerberg faced Congress with Google CEO Sundar Pichai and Twitter CEO Jack Dorsey to talk about spread of misinformation on their social media platforms. Zuckerberg also faced the Senate in November to be challenged by lawmakers about decisions Facebook took around the election.

He believes in open borders, He protested the border wall , He spent more facebook on his own security then money for the nation's security. He cheated the Election by spending millions on harvest balloting , Mark Suckerburg sucks.

$23 million? Now why would a wanna be Naxi be worried about his safety? ps.. if you make the $$ this douchebag makes and live behind gated armed walls in a palace, your not about equality

It has to suck not to be able to walk down the street without worrying about being killed. Sure hes got all the money he will ever need but he will never be free to lead a life. That makes me feel all warm inside... Lol. One of the most hated men in the world. Ha... Thoae white guys in tech are racists aren't they? Just going by what the demorats say.

This startup wants to scan the eyes of every person on Earth in exchange for a free cryptocurrency; 100,000 people already signed up

The world is never short of great and impactful ideas. However, once in a while technology startups come up with strange ideas that sound like something out of a sci-fi movie. One of those outlandish ideas is a metallic orb developed by Worldcoin, a startup that scans people’s eyes in exchange for free cryptocurrency.
TECHNOLOGY・23 HOURS AGO
Newsweek

A mom told Jeff Bezos that Amazon was underpaying her $90 a month, sparking an internal probe that found the company was shortchanging some workers, a report says

Mark Zuckerberg's wife Priscilla Chan says her two daughters, aged five and four, are already learning to code with their father - and admits she thought her husband was a 'bit of a rebel' when they first met at Harvard

Mark Zuckerberg's wife Priscilla Chan has revealed how her two daughters, aged five and four, are already learning to code with their tech-whizz father. The American philanthropist and a former paediatrician, 36, also admitted that she thought her Facebook-founder husband was a 'bit of a rebel' when they first met at Harvard 18 years ago.
FAMILY RELATIONSHIPS・2 DAYS AGO
Business Insider

Mark Zuckerberg said on an earnings call that Facebook is "retooling" its team to appeal to young people, a user base that favors rivals like TikTok.
INTERNET・18 HOURS AGO
Business Insider

How do remote work and return-to-office policies impact employees? We want to hear from workers worldwide.
BUSINESS・23 HOURS AGO
TIME

Facebook’s stock price has been diving since the Wall Street Journal first published initial reports from whistleblower Frances Haugen on Sept. 13. As of Monday’s close, the company’s shares are down nearly 13%. And although Facebook’s valuation is still near an all-time peak since going public in 2012, it’s dipped below the $1 trillion mark that it breezed past for the first time earlier this year. As Haugen took the dais in Parliament on Monday, analysts disagreed whether her testimony and leaked documents could damage the tech giant.
INTERNET・17 HOURS AGO

Some Facebook employees use these internal "swan songs" to voice their praise for the company, according to newly revealed "Facebook Papers."
INTERNET・1 DAY AGO
Praise 106.1

"Facebook’s persistent actions to undermine content moderation are the latest evidence that Mark Zuckerberg and Facebook leadership will continue to sacrifice the safety of our communities to line their pockets."
INTERNET・16 HOURS AGO
AFP

Facebook announced over $9 billion in quarterly profits on Monday, hours after a US news collective published a deluge of withering reports arguing the company prioritizes its growth over people's safety. The social media giant has been battling a fresh crisis since former employee Frances Haugen leaked reams of internal studies showing executives knew of their sites' potential for harm, prompting a renewed US push for regulation. Facebook released results showing its profit in the recently-ended quarter grew to $9.2 billion -- a 17 percent increase -- and its ranks of users increased to 2.91 billion. Facebook executives said on an earnings call that the tech titan would have brought in even more money if not for Apple updating its iPhone operating system to thwart advertisers tracking app users for ad targeting without permission.
INTERNET・17 HOURS AGO
Business Insider

Facebook recommended QAnon groups to a new user within 2 days of joining the platform, according to a new whistleblower report

Facebook pushed a new user toward groups for the far-right conspiracy theory QAnon within days of her joining the platform, reported documents show.
INTERNET・19 HOURS AGO

Former Facebook data scientist turned whistleblower Frances Haugen plans to answer questions Monday from lawmakers in the United Kingdom who are working on legislation to rein in the power of social media companies.
TECHNOLOGY・22 HOURS AGO
WREG

Exclusive: Clubhouse has hired its first general counsel, who was a key early employee at Pinterest

Anthony Falzone adds to a team of more than 80 employees at Clubhouse, which was founded early in the pandemic by a pair of serial entrepreneurs.
BUSINESS・17 HOURS AGO
MarketWatch

Companies pledged billions toward racial justice in 2020. Tracking where all the money went is ‘almost impossible.’

Facebook, Amazon, Google and other companies made big public pledges, but have kept some of the details on the money private.
BUSINESS・6 HOURS AGO
truthorfiction.com

AdvertisementsOn October 21 2021 — against a backdrop of a long-running national discussion about student debt — a tweet asserting that “US student loans cost the government over $60B more to service than they bring in a year” became virally popular:. Wait was nobody going to tell me that US...
COLLEGES・17 HOURS AGO
Business Insider

Facebook CEO Mark Zuckerberg has become more isolated inside his own company, The Washington Post reported former employees as saying, as he grapples with growing criticism and fallout from the Facebook Papers. The former employees said that Zuckerberg primarily communicates decisions to a tight inner circle known as the "Small...
BUSINESS・1 DAY AGO
Business Insider

Facebook whistleblower Frances Haugen says it's cheaper to run 'hateful' ads on the platform than other kind of adverts. 'We are literally subsidizing hate.'

Frances Haugen said Facebook's ad pricing was partially based on how likely users are to interact with it, making "angry" ads "substantially" cheaper.
INTERNET・6 HOURS AGO
Business Insider

Apple is being sued by a San Francisco man for $1,383.13, the exact cost of his iPhone 12. He says the company refused to fix the device while it was under warranty.

An Apple iPhone owner in San Francisco is suing the company for the exact cost of his iPhone, saying the company won't fix it despite a warranty.
LAW・2 DAYS AGO