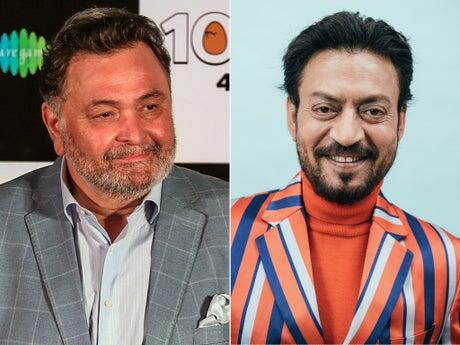 Indian fans of Irrfan Khan and Rishi Kapoor are overwhelmed at the moving tribute paid by the 74th British Academy Film Awards (BAFTAs) to the late Bollywood actors in their “in memoriam” segment on Sunday.

Both actors died in 2020 after battling cancer .

Numerous fans from India took to social media to express gratitude towards BAFTA for including the Bollywood legends alongside other actors such as Sean Connery, Kirk Douglas, and Black Panther star Chadwick Boseman .

Prince Philip, the Duke of Edinburgh was also a part of the tribute.

The homage was in the form of a video dedicated to over 40 entities from the entertainment industry across the globe who lost their lives in the past 12 months.

One fan wrote on Twitter: “Proud moment for India! Remembering Irrfan Khan just makes me miss him even more. What a legend. One of the best actors in my mind.”

Another fan wrote: “What a proud moment for Bollywood! BAFTA pays tribute to the late actors Rishi Kapoor and Irrfan Khan in their ‘In Memorium’ segment.

“EEBAFTAs remembering Irrfan Khan just makes me miss him even more. What a legend! So many great legends have left us. Chadwick Boseman, Dame Barbara Windsor, Sean Connery. It hurts to see this,” wrote another fan.

Khan also performed in international features like Slumdog Millionaire, Life of Pi, The Namesake, Jurrasic World (2015), The Warrior, and A Mighty Heart.

Kapoor was to star in the Bollywood remake of The Intern to play the part of Ben Whittaker, Robert De Nero’s character.

NEW DELHI — Kareena Kapoor Khan posted a childhood picture of herself with sister Karisma Kapoor and their mother, Babita. She treated her fans with the unseen childhood picture on Instagram. Khan dug out a picture from her 80s family album in which she can be seen posing beside a...

Jamie Lee Curtis reveals her 25-year-old daughter is transgender: ‘We have watched in wonder and pride’

Jamie Lee Curtis has shared for the first time that her 25-year-old daughter Ruby is transgender. Curtis made the announcement with her daughter’s permission in a new cover interview with AARP The Magazine. She said she and her husband Christopher Guest “have watched in wonder and pride as our son...

Black Adam Wraps Filming, The Rock Thanks His Team with Emotional Speech and $10K Prize

Black Adam is a role that has been close to Dwayne Johnson's heart long before the latest run of DC Extended Universe movies were even in production. Three months after being able to don the suit and bring his muscle to the superhero party, Johnson celebrated the end of filming on Black Adam by giving a genuine, heartfelt speech to cast and crew on the set. He shared the video via his Instagram account, in which he describes working on the movie as "easily the hardest labor and toughest grind mentally and physically" of his whole career to date.

Chrissy Teigen broke down on her Instagram Story Wednesday (July 21st) while looking at letters she received after the miscarriage she suffered last year. The 35-year-old star said, “This is just piles of letters that we just got because the place we usually get mail from, where you guys send mail, has been shut down, and it opened back up. And now we got everything. You guys sent the most amazing condolence letters and cards and books, and I just want you to know we got all of them.”

“A compendium of illusions rests on your people kneeling on your ground my mouth kisses you again from the jungle to the red and white sea is my consolation”, ended in his text, which It was accompanied by a video in which he performed a heartfelt interpretation of the song “Hoy” while playing the charango.

Popular comedians Kenny Sebastian, Mallika Dua, Kaneez Surka, Amit Tandon and Aakash Gupta among others are all set to make everyone laugh with their acts on Netflix’s Comedy Premium League. As per a statement issued by the streaming giant, ‘Comedy Premium League’ will have six episodes and it will explore multiple formats of comedy including improv, skit, stand-up, punchlines, and roast. Monica, O My Darling: Rajkummar Rao, Huma Qureshi, Radhika Apte’s First Look From Netflix’s Project Out (Watch Video).

Disney has been criticised for its response to Scarlett Johansson’s lawsuit against the studio.Johansson has alleged that the streaming release of Black Widow at the same time it was released in cinemas violated her contract.The actor’s lawsuit says that her compensation for the movie was “largely based” on Black Widow’s box office performance, and had “extracted a promise from Marvel that the release would be a ‘theatrical release’.’It continues: “Disney was well aware of this promise, but nonetheless directed Marvel to violate its pledge and instead release the Picture on the Disney+ streaming service the very same day it...