Harry Reid on former House Speaker John Boehner: 'I did everything I could to cause him trouble' but we 'got a lot done' 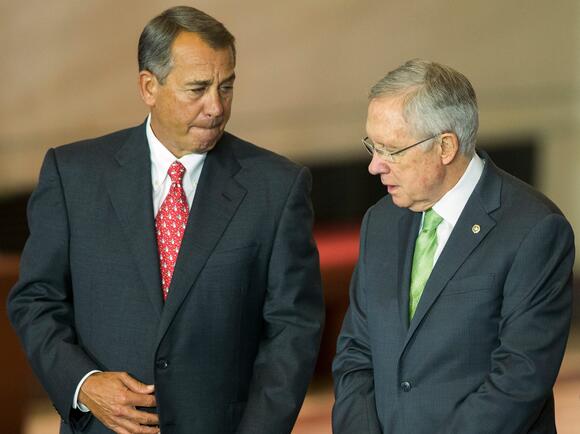 When former Democratic Senate Majority Leader Harry Reid of Nevada was asked on Saturday about a now-infamous confrontation with former GOP House Speaker John Boehner of Ohio at the White House in 2013, he seemed to express a sense of nostalgia.

During a CNN interview , host Jim Acosta made reference to Boehner's new memoir, "On the House: A Washington Memoir," where the former speaker recounted that Reid called the House a "dictatorship of the Speaker" during a challenging set of fiscal-cliff negotiations at the White House during then-President Barack Obama's tenure.

In the memoir, Boehner expressed how infuriated he was with the comment.

"If I were a dictator, do you think I'd let all these members get away with screwing me over all the time?," he wrote. "Hell no! And Reid, who was a ruthless bastard, knew exactly what I was doing."

He continued: "So when I saw him at the White House the next day, talking quietly with Mitch McConnell before the meeting, I went over, got in Reid's face, and said, 'Do you even listen to all of the s--- that comes out of your mouth?' You can go f--- yourself."

When asked for a response by Acosta, Reid said that he "got along well" with the former speaker.

"The deal is this - John Boehner and I got a lot done, but we didn't mince words," he said. "He was right. I did everything I could to cause him trouble because I knew he was having a lot of trouble. The more trouble he had in his caucus, the better it was for us, and he knew what I was doing, and I wasn't at all surprised that he came to me and gave me one of his underhanded blessings."

Reid, who served in the Senate from 1987 to 2017, also gave an interesting tidbit on why he always conducted business with Boehner in the former speaker's office.

"We had a deal," he said. "He would not come to my office. I would always go to his office. I didn't want anybody smoking in my office, so all of our meetings were in his office. He could smoke to his heart's content."

He added: "I have a lot of respect for John Boehner. He, as far as I'm concerned, was a great patriot."

Boehner's memoir, where he criticizes leading Republican figures including former President Donald Trump, Sen. Ted Cruz of Texas, and Rep. Jim Jordan of Ohio, is set to be released on April 13.

Jordan slams January 6 commission: If 'everything's on the table,' why can't we question Pelosi

Kevin McCarthy: It Will Be ‘Hard Not to Hit’ Nancy Pelosi With Gavel if I Become House Speaker

House Minority Leader Kevin McCarthy joked Saturday night that it would be “hard not to hit” Nancy Pelosi with the Speaker of the House’s gavel if Republicans take control of the House of Representatives in next year’s midterm elections. The California congressman made the comments at a Republican fundraiser in...

Warner regrets Harry Reid's filibuster change: 'I wish we wouldn't even have started this'

Sen. Mark Warner, D-Va., said Sunday he regrets that his party opened the door to changing the filibuster, even as he sounded open to changing it further to exempt voting rights legislation from the 60-vote legislative threshold. When asked whether President Biden should support eliminating the filibuster, Warner pointed out...

‘Something has to change’: GOP Sen. Graham and Democratic Rep. Cuellar urge Biden to tap Jeh Johnson or someone similar for border czar

Democratic Rep. Henry Cuellar and Republican Sen. Lindsey O. Graham are teaming up to urge the White House to name former homeland security secretary Jeh Johnson or someone with similar credentials to coordinate efforts to combat the influx of migrants to the southern border — a fresh signal of frustration with President Biden’s strategy among prominent lawmakers.

Biden got a lot done in a short time

President Joe Biden has been in office for six months, and he’s already made progress fighting the devastating pandemic and reinvigorating the weak economy that gripped the nation during Donald Trump ’s last year as president. So far, so good for Biden and the nation. The new president has got a lot done in a short time, with little or no help from the GOP.

Ted Cruz says a vaccine mandate is 'authoritarianism,' but he supports them in Texas

The Republican senator from Texas suggests it's tyranny to require a COVID-19 vaccine. But he abandons the argument for other infectious diseases.

After Republican Leader Kevin McCarthy this week decried the House’s new face mask requirement, Speaker Nancy Pelosi (D-Calif.) replied with a considered response: “He’s such a moron.”. Mean! But if the dunce cap fits …. Such an incendiary charge by Pelosi demands a fact check: Is McCarthy, in fact, a...

"Congress and the States have shown that they are ready and able to address the issue," lawyers representing the lawmakers wrote in a brief.

The 2,700-page bill will launch what is certain to be a lengthy debate over Joe Biden’s big priority

Churchill: Elise Stefanik's lie about Nancy Pelosi is a doozy

ALBANY — The meat of what Elise Stefanik said Tuesday was bad enough, but the eight words that began the sentence made her outrageous claim especially repugnant. The American people deserve to know the truth. Yes, they certainly do. But what followed wasn't the truth. It was a terrible and...

Schumer: Senators Will ‘Get the Job Done’ on Infrastructure

WASHINGTON (AP) — The Senate convened for a rare weekend session on Saturday, with Senate Majority Leader Chuck Schumer encouraging the authors of a bipartisan infrastructure plan to finish writing their bill so that senators can begin offering amendments. Several senators had predicted that the text of the bill would...

House Minority Leader Kevin McCarthy joked at an event that it “will be hard not to hit” House Speaker Nancy Pelosi with the speaker’s gavel if Republicans take control of the chamber in the 2022 midterms and he becomes speaker. CNN’s Suzanne Malveaux reports Pelosi’s spokesperson and deputy chief of staff swiftly condemned the comments.