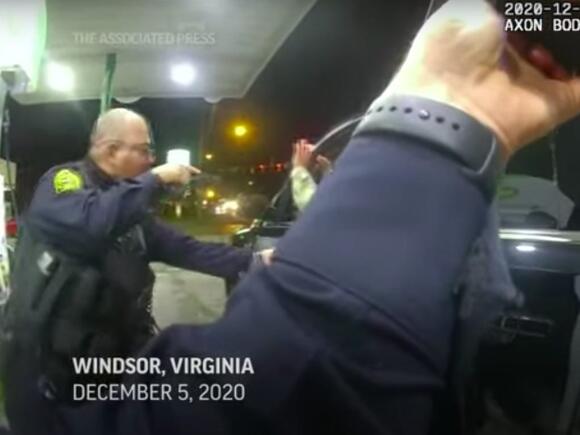 A US Army lieutenant is suing two Virginia police officers for holding him at gunpoint, pepper-spraying him, and throwing him to the ground during an illegal traffic stop that took place last year.

Caron Nazario, a Black and Latino man who is a second lieutenant in the US Army Medical Corps , was driving home from his duty station on December 5, 2020, when police pulled him over, attorney Jonathan Arthur told The Associated Press on Friday.

The officers, identified as Joe Gutierrez and Daniel Crocker, later claimed they pulled Nazario over because he had tinted windows and was missing a rear license plate.

Read more: Derek Chauvin's trial is testing the stress levels of Black Americans. Here's what leaders and allies can do to help.

According to a report included in the lawsuit, Crocker radioed in that the driver was "eluding police" and that it was considered a "high-risk traffic stop," the Washington Post reported.

Nazario had attempted to explain at the time that he wasn't trying to elude the officer but wanted to stop in a well-lit area "for officer safety and out of respect for the officers," Arthur said, according to AP.

The lawsuit says by the time the two officers reached his SUV, the license plate was visible.

Body camera footage of the incident shows the officers shouting at Nazario to get out of the car. The Army lieutenant, who is seen holding his hands in the air, says: "I'm honestly afraid to get out."

One of the officers, holding a gun to Nazario's face, responds: "Yeah, you should be!"

At one point, Gutierrez threatened the Virginia university graduate that he was "fixin' to ride the lightning." AP reported that this is a reference to the electric chair which was also a line from the movie "The Green Mile," a film about a Black man facing execution.

In the lawsuit , filed earlier this month, the police officers were said to have "approached with guns pointed at the car, gave opposing instructions to a uniformed soldier behind the wheel, and then pepper-sprayed him - all while threatening him with different charges and levels of violence for non-compliance," Complex reported.

Watch the moment below:

Nazario has sued Gutierrez and Crocker, claiming violations of his constitutional rights under the Fourth and First Amendments. Asked about Nazario's condition after the incident, Arthur told AP: "He's definitely not doing too well."

The lawsuit says: "These cameras captured footage of behavior consistent with a disgusting nationwide trend of law enforcement officers, who, believing they can operate with complete impunity, engage in unprofessional, discourteous, racially-biased, dangerous and sometimes deadly abuses of authority ..."

Both Gutierrez and Crocker filed reports with "near-identical" misstatements, the lawsuit said according to the Washington Post.

Their reports of the incident claimed that Nazario refused to show his hands and slapped theirs away when they tried to get him out.

Crocker and Gutierrez still work for the department, according to AP.

Read the original article on Business Insider
View All 512 Comments

An Army veteran who unsuccessfully sought shoulder surgery from a New York Veteran’s Affairs hospital for debilitating pain will instead find himself sentenced in federal court for breaking a $111 computer monitor in anger, according to court records.

A Virginia man charged Friday with fatally stabbing his ex-girlfriend was set to enter a plea Monday in an earlier domestic violence case involving the same woman, according to court records. Derek Edward Malevich, 40, was charged in September with shoving, punching and strangling Kristen Ann Bicking, who was found...

HAMPTON, Va. (AP) — Police are investigating the fatal stabbing of two men in an altercation in Hampton. News outlets report that police said first responders called to a Shell Road on Sunday afternoon found two men with stab wounds. A 66-year-old man was pronounced dead at the scene and a 19-year-old man was taken to a local hospital where he later died, police said.

GROTTOES, Va. – A Virginia public defender’s office says a man who was recently fatally shot by a sheriff’s deputy was suffering from a mental health crisis at the time. The News Leader reports the Staunton Public Defender’s Office released a statement Saturday about the fatal shooting a day earlier of Jeffrey J. Bruce.

The former Windsor Police officer fired after pepper-spraying a U.S. Army lieutenant during a traffic stop is asking for a judge to dismiss a $1 million lawsuit against him.

A Prince George’s County elementary school teacher is accused of a series of attacks in a park in D.C. and along a trail in Alexandria. Michael Thomas Pruden, of Fort Washington, was arrested and charged with assault with a dangerous weapon, U.S. Park Police said. Officials say he shined a...

A Virginia man was found dead in a parking lot in Bladensburg over the weekend, Prince George’s County police said. Police found the man, 33-year-old Christian Artiga, in the 5600 block of Annapolis Road after responding to the location just after 3 a.m. Saturday for a report of a shooting.

A Front Royal man died in a Sunday afternoon crash on a county roadway that has a history of accidents. Austin E. Howard, 65, was driving a 2001 Ford Ranger westbound on Va. 55 (John Marshall Highway), when he crossed a double solid yellow center line and collided head-on with an eastbound 2011 Ford F-150, according to Virginia State Police Sgt. Brent Coffey.

Where do I still have to wear a mask? | The nitty-gritty of remaining mask guidelines for Virginia, North Carolina

Starting at the end of last week, Virginia and North Carolina mask mandates changed dramatically. In both states, people fully vaccinated against COVID-19 don't need to wear masks in most indoor and outdoor spaces any more. (For unvaccinated people, masks are still strongly recommended.) But - that doesn't mean there...

COVID-19 in Virginia: LIVE updates for Monday, May 17

RICHMOND, Va. -- In an effort to provide accurate, easy-to-read information on the on-going COVID-19 outbreak and its impact on our community, WTVR.com will update this post with the day's local coronavirus headlines and statistics. COVID-19 IN VIRGINIA (Scroll to bottom for U.S. stats) Positive COVID-19 Cases Since Start of...

Coronavirus in DC, Maryland, Virginia: What to Know on May 17

Average COVID-19 case numbers were up slightly in D.C. on Monday and down in both Maryland and Virginia. Data from Monday shows 45 more cases of the virus in D.C. Two more people died of COVID-19, a 68-year-old man and a 68-year-old woman. About 49% of the population was partially...

ACCOMACK COUNTY, Va. — Virginia State Police are investigating a crash that killed a woman Monday morning on the Chincoteague Causeway. Authorities said they got a call to investigate a deadly head-on crash that occurred Monday, May 17 around 7:18 a.m. on Route 175. This happened in the area of Queens Sound Bridge.

WASHINGTON — Veterans who were previously denied service connection for an herbicide related presumptive condition due to lack of in-country Vietnam service will have their claims automatically readjudicated by VA. The department began readjudicating claims in April for Veterans who served in the offshore waters of the Republic of Vietnam...

Northam: ‘It’s Our Shot, Virginia: Statewide Day of Action’ to take place on May 18

RICHMOND, Va. (WHSV) - Tuesday, May 18, is the “It’s Our Shot, Virginia: Statewide Day of Action,” a day Governor Ralph Northam says is to help Virginians make a plan to get vaccinated against COVID-19. “I’m proud of Virginia’s vaccination progress, which has helped slow the spread of COVID-19 in our Commonwealth to its lowest level in over a year,” said Governor Northam in a press release. “Putting this pandemic behind us once and for all requires everyone doing their part—that means making sure you are informed, getting your free COVID-19 vaccine, and helping your friends, family members and neighbors make a plan to get vaccinated.”

Fort Wool, Mt. Calvary cemetery in Portsmouth make this year’s roster of the most endangered historic places in Virginia

Fort Wool in the Hampton Roads Harbor made ths year’s list of the most endangered historic places in Virginia because deferred maintenance now threatens the pre-Civil War landmark. So did Mount Calvary Cemetery Complex in Portsmouth, which is losing its fight with constant flooding. Most of what were once known...