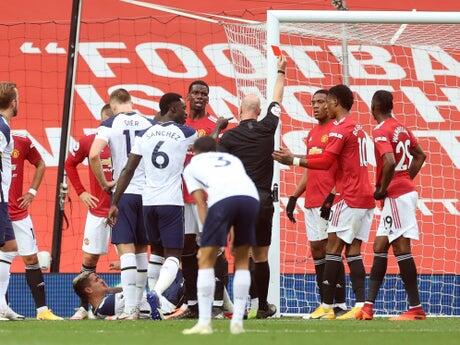 Ole Gunnar Solskjaer has warned his Manchester United players not to be "conned" as he claims Anthony Martial was in the 6-1 defeat to Tottenham Hotspur earlier this season.

United travel to north London for the reverse fixture of their joint-heaviest Premier League home defeat, which saw Harry Kane and Son Heung-min run riot at Old Trafford back in October.

Solskjaer's side were already 2-1 down after half an hour when Martial was sent off for swiping at Tottenham's Erik Lamela, who appeared to strike him with an elbow.

United have recovered since and now sit 11 points clear of Jose Mourinho's side. When asked what his side had learned from the chastening defeat, Solskjaer suggested his players know to be more streetwise.

"The biggest thing we've improved on is our fitness levels because we were way short of what they were at. It was our third game, was it?", he said.

"Third game and we didn’t look anything like... and we got conned into a red card, and that's something that we have to be aware of.

"We can't react like this because we know in games there’ll be situations where we’ll be wound up. We’ve learned a lot from that and I'm sure we’ll have a better performance this time around."

Solskjaer believes his players will take extra motivation from the 6-1 into Sunday's game.

"The way and the manner we lost is not ourselves and we know that. We gave ourselves a difficult game by having 10 men.

"Pre-season was short and we weren't up to the standard required, but we were so poor and I'm pretty sure we'll see some players wanting to prove that we're better than that."

Ole Gunnar Solskjaer has urged Manchester United to start the Premier League season strongly as they look to avid a repeat of last year. United lost three of their first six games last campaign, which included an opening day defeat to Crystal Palace, and Solskjaer is aware that his team can ill afford to have another slow start this time around.

Manchester United boss Ole Gunnar Solskjaer has insisted Jesse Lingard is in the club’s plans for next season.The 28-year-old midfielder made just three appearances in the first half of the 2020-21 campaign before going out on loan to West Ham in January.And Lingard thrived at the London Stadium as he netted nine times in 16 games, a sensational run of form which saw him named in Gareth Southgate’s provisional 33-man squad for Euro 2020.His future at Old Trafford has been called into question following his impressive spell at West Ham, but Solskjaer feels there is a place for him in...

Manchester United starlet Facundo Pellistri appears to be in disagreement with manager Ole Gunnar Solskjaer over where his future lies. Pellistri signed for Man United from Peñarol back in October of last year, before joining Spanish outfit Alaves on loan in January. With the Uruguayan now back with the Red...

Facundo Pellistri DISAGREES with Ole Gunnar Solskjaer and wants to stay at Manchester United this season after scoring in friendly win over Derby... with the Red Devils boss saying it's in his 'best interests' to make another temporary switch

Winger Facundo Pellistri has expressed his disagreement with manager Ole Gunnar Solskjaer's assessment that another loan for him is in his 'best interests'. The 19-year-old winger joined Manchester United last year from Uruguayan side Penarol for £9million, but has yet to make a senior appearance for the club. He was...

Manchester United kick-started their preparations for the new season with a 2-1 win over Derby County in a friendly on Sunday at Pride Park Stadium. Tahith Chong gave his team the lead in the 18th minute before Facundo Pellistri rounded the goalkeeper and doubled the score in style after the break. The hosts reduced the deficit through Colin Kazim-Richards, but it was a largely comfortable night for Ole Gunnar Solskjaer, who confirmed that Jadon Sancho’s arrival is just a matter of time now.

Raphael Varane 'has agreed a contract with Manchester United until 2026'... but Ole Gunnar Solskjaer's side have 'yet to reach a deal with Real Madrid' with French defender 'happy to play the waiting game'

Manchester United have moved one crucial step closer to the dream centre-back partner for Harry Maguire, reportedly agreeing terms with Raphael Varane until 2026. Those terms will be voided if United can't complete a deal with Real Madrid to sign the player, but Los Blancos are already resigned to losing the 28-year-old.

Manchester United manager Ole Gunnar Solskjaer has revealed that Jadon Sancho is set to complete his move to Old Trafford once 'small little details' are completed. On July 1 United announced that they had reached an agreement in principle with Borussia Dortmund for the signing of Sancho. The £73million deal...

BREAKING NEWS: Manchester United confirm Ole Gunnar Solskjaer has signed a new contract that will see him at the club until 2024 with the option for a further year at the Red Devils

Manchester United have confirmed that Ole Gunnar Solskjaer has signed a new contract to extend his stay as manager at Old Trafford. The Norwegian has signed a deal which will take his stay at the club until 2024, with an option of a further year. Ed Woodward, Executive Vice-Chairman, said:...

Ed Woodward, one of the Premier League’s great spin-men, will soon be gone. Much of his eight-year reign over Manchester United has been defined by chaos, one poor decision inevitably giving way to another and another. And at the top of the tree, there is little margin for error. Amidst...

Ole Gunnar Solskjaer arrived at the Kiyan Prince Foundation Stadium after an upbeat 24 hours - but the Manchester United boss had little to celebrate as his makeshift side slumped to an embarrassing friendly defeat. On Friday, Solskjaer finally completed the £73million capture of long-term target Jadon Sancho before Saturday...

Manchester United step up their pre-season preparations as they take on Queens Park Rangers in West London on Saturday afternoon. Ole Gunnar Solskjaer's side are ramping things up as they bid to close the gap on Manchester City in the Premier League and lift their first piece of silverware under the Norwegian.

Ole Gunnar Solskjaer has warned Manchester United 's rivals that the club are ready to compete for major honours after signing a new contract extension. Solskjaer, 48, has penned a new three-year deal at Old Trafford with an option of a further 12-months, after encouraging talks over the direction of the club with United officials.

Manchester United left back Alex Telles will miss the start of the Premier League season due to an ankle injury, Ole Gunnar Solskjaer has confirmed. The Brazilian sustained the problem during the club's training camp in Surrey last week and returned home from his duties, missing Saturday's friendly defeat against QPR.

Donny van de Beek made a welcome return to Manchester United training on Monday ahead of a huge second campaign at the club for the Dutchman. The midfielder had missed the start of pre-season and United's two friendlies with Derby County and QPR as he was still recovering from a groin injury.

It was almost easy to forget, as news filtered through on Monday that Manchester United had agreed a fee with Real Madrid for Raphael Varane, three days after announcing Jadon Sancho’s signing, that Old Trafford felt like a tinderbox only a few months ago. Just weeks after Avram Glazer had...

Manchester United CONFIRM they have 'agreed a deal in principle' to sign Raphael Varane from Real Madrid for £42m... as Ole Gunnar Solskjaer's transfer window spending hits a whopping £115m after arrival of Jadon Sancho for £73m

Manchester United have announced that the £42million deal for Raphael Varane to join from Real Madrid is almost complete, with the Frenchman set to become Ole Gunnar Solskjaer's third arrival of a sensational summer. The 28-year-old World Cup-winning centre back has long been one of United's top targets. Varane's contract...

Ole Gunnar Solskjaer says he "can't ask for more backing" from Manchester United after securing both Jadon Sancho and Raphael Varane early in the transfer window. Real Madrid defender Varane's arrival should be confirmed in the coming days, United's second major signing of the summer after Sancho's £73m move from Borussia Dortmund.

Ole Gunnar Solskjaer believes proven winner Raphael Varane and exciting winger Jadon Sancho will make a “huge difference” for Manchester United moving forwards. Having finished runners-up in last season’s Premier League and Europa League, the Old Trafford giants have made waves in the transfer market in a bid to bring silverware back to the club.

Ole Gunnar Solskjaer says he WOULDN'T tell his Manchester United stars to hack down a player to deny a goal scoring chance... but admits he has no regrets over the red card he once got for doing the same, despite being blasted by Sir Alex Ferguson!

Ole Gunnar Solskjaer has claimed he would not advocate his Manchester United stars to copy one of the more cynical moments of his playing career when he was sent off against Newcastle United. Solskjaer is a United legend following his playing days after helping them to win the Treble in...

Manchester United rocked by up to NINE Covid cases in camp a day after Brentford friendly, forcing Saturday's game with Preston to be called off in a major blow to Ole Gunnar Solskjaer's pre-season plans for the new Premier League campaign

Manchester United have been forced to postpone their friendly against Preston North End on Saturday following a Covid outbreak. It is understood there are up to nine positive cases. Tests carried out following Wednesday's friendly match with Brentford - which was played in front of 30,000 supporters, revealed a small...