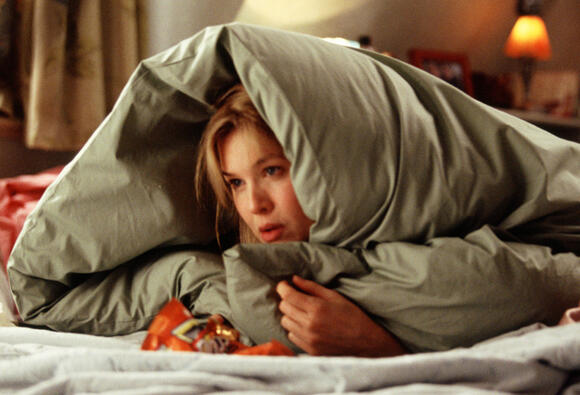 The 2001 rom-com, which starred Renée Zellweger as a 32-year-old single woman living in London and Colin Firth and Hugh Grant as her love interests, will celebrate its 20 th anniversary next week.

Reflecting on Firth and Grant’s iconic fight scene, Phillips – who played best friend Shaz in the film – told ITV’s Lorraine : “This is them improvising... slapping each other, trying to kick and missing. We filmed this scene for a whole week. As you can see we’re not in it very much so we sat in deck chairs and watched Hugh and Colin slap each other for a week. And Jim Carrey was there. Renée was dating Jim at that point. So he was bigger and taller and harder and fitter than both of them, so I think they were even more embarrassed.”

Speaking about Zellweger staying in character on set, Phillips said: “It was really weird. I’d made quite good friends with her during the filming, I realised towards the end when she suddenly lost a stone in the last week and started talking in a Texan accent at the wrap party, I’d made friends with Bridget, not Renée.”

She added: “I felt like those women must feel who’ve had a relationship with an undercover cop, a bit deceived and weirded out. But I think it was genius actually [to cast her]. There were lots of people up for that part.”

It was recently revealed that Zellweger went undercover working at a British publishing company for a whole month to prepare for the role.

Zellweger, an American, used a posh accent as well as an alias, and was said to be unrecognised by the workers around her.

The one thing that would have clued people up to her identity, though, was a framed picture of Carrey that she kept on her desk.

John Travolta only recently marked the first anniversary of his wife, Kelly Preston's, death and on Thursday he updated fans with news involving her. The Saturday Night Fever star used Instagram as his platform to reach out to fans with a bittersweet announcement. John revealed that the last movie Kelly made before her passing was finally coming out in theaters.

If there’s one thing Summer 2021 is going to be remembered for in Hollywood is the lightning speed of relationships. With Bennifer 2.0 on fast forward, it looks like Renée Zellweger and Ant Anstead are taking a move from Jennifer Lopez and Ben Affleck’s playbook. But where JLo and Affleck have a long history together, this duo is still getting to know each other.

That was fast! Renée Zellweger and her new boyfriend Ant Anstead have been dating for a mere two months — but a source says that they’re so in love, they’re already considering a quickie marriage. Article continues below advertisement. They’re not wasting any time wedding planning either: “Ant and Renée...

Sally Phillips has paid tribute to her "vibrant and beautiful" late co-star Kelly Preston ahead of the release of their final film together. The Bridget Jones actress stars alongside Preston in new movie, Off The Rails, getting close to the star as they filmed in Spain together. Sadly, Preston died...

Has Christina Haak Warned Renée Zellweger About Ex Ant Anstead? 'He's Only Interested In One Thing: His Career,' Source Spills

Is it already time for Renée Zellweger to run? It's only been a few weeks since news broke that the actress is happily dating Ant Anstead, but sources are already spilling that the reality star's ex, Christina Haak, is advising the A-lister to steer clear. Article continues below advertisement. "The...

John Travolta is remembering his late wife Kelly Preston by marking the premiere of her final film role in the comedy-drama Off The Rails. The 67-year-old actor shared the film's trailer with his Instagram following on Friday, while recalling how much pride Kelly felt towards the production. 'Off the Rails...

Actresses Sally Phillips and Jenny Seagrove walked the red carpet of their new film Off The Rails wearing Tatty Devine necklaces bearing the name of their late co-star, Kelly Preston. Sally, 51, wore a bright pink 'Kelly' charm around her neck, while Jenny, 64, opted for Kelly's name in blue.

Heating up the beach! Renee Zellweger and Ant Anstead were spotted packing on the PDA during a beach outing over the weekend. The lovebirds enjoyed the sunset on the sandy shores in Laguna Beach, California, on Saturday, and they shared a passionate kiss while strolling along outside Anstead's luxurious oceanfront home.

Ant Anstead shared an Instagram comment that presumably hinted at his relationship with Renée Zellweger — and internet sleuths are thrilled. Insert the eyeball emoji here: Ant Anstead hinted at his relationship with Renée Zellweger on Instagram on July 15. The TV presenter, 42, shared a scenic selfie from the desert on Thursday next to a black dog that looks like one of the Golden Globe winner’s pups. When Mark Groves, founder of the “Breakup Recovery” course that Ant previously participated in, commented that he couldn’t “wait to hang again” soon, Ant responded with a message about a little someone.

This is FRESH AIR. I'm David Bianculli, professor of television studies at Rowan University, sitting in for Terry Gross. Our guest, actor Hugh Grant, has been nominated for an Emmy for his role in the HBO miniseries "The Undoing." He became famous for his romantic comedies and for playing witty and charming characters. His breakthrough role was in the 1994 movie "Four Weddings And A Funeral." He also starred in "Bridget Jones's Diary," "About A Boy," "Love Actually," "Music And Lyrics" and "Florence Foster Jenkins."

Unsurprisingly, the early coverage of Bridget Jones’s Diary does not hold up.

I believe Helen Fielding’s Bridget Jones’ Diary, first published in the UK 25 years ago this year, is one of the funniest books ever written. This isn’t exactly an unpopular opinion. As of 2016, the book—together with its (less-satisfying) sequel Bridget Jones: The Edge of Reason—had sold more than 15 million copies worldwide. It defined the oft-maligned chick-lit genre and spawned exactly one excellent romantic comedy. It’s not exactly underrated. Still, looking back on the early coverage of Bridget Jones is a lesson in just how condescending the literary world could be to women writing about relationships (we could all save ourselves a lot of Sally Rooney discourse if we just admitted that we like her books because she writes well about dating, but I digress). Take a trip with me back to the late 90s, when the bar for criticism of novels by and about women was as low as the jeans.

Actress Renee Zellweger’s relationship with Christina Haack’s ex-husband Ant is moving quickly. Paparazzi caught the 52-year-old Hollywood star pulling a bunch of personal belongings into her new man’s Laguna Beach mansion. Article continues below advertisement. The pair have only been known to be dating for about a month. They were...

Watch: Renee Zellweger and Ant Antstead Are Reportedly Dating. Fans can now watch Renée Zellweger and Ant Anstead's relationship bloom from the beginning. The couple, who met on Discovery+'s new show Celebrity IOU: Joyride, can be seen together on-screen for the first time in the new trailer that just dropped today, July 19. The Oscar winner appeared on the show to give brothers Jerome and Jerald cars after they looked after publicist Nanci Ryder, who passed away in June 2020 following a years-long battle with ALS, per a press release.

Although it seems like they haven’t been dating for more than a month or two, Renée Zellweger and Ant Anstead have already proved that their relationship is getting serious after taking a major step: While the couple has been spotted out and about on the streets of Laguna Beach and near Anstead’s luxurious home, on Saturday, the pair took their romance to the beach — and they were joined by one particularly important member of Anstead’s family.

Fans can now watch Renée Zellweger and Ant Anstead‘s relationship bloom from the beginning. The couple, who met on Discovery+’s new show Celebrity IOU: Joyride, can be seen together on-screen for the first time in the new trailer that just dropped today, July 19. The Oscar winner appeared on the show to give brothers Jerome and Jerald cars after they looked after publicist Nanci Ryder, who passed away in June 2020 following a years-long battle with ALS, per a press release.

Making it official! After OK! spilled that actress Renée Zellweger was spotted carrying items into her new beau Ant Anstead’s luxurious Laguna Beach home last week, sources are dishing that the duo are ready to take their relationship to the next step. Article continues below advertisement. “Renée is already moving...

Stoke Park: The walk around the Bucks country mansion where James Bond and Bridget Jones were filmed

With Pinewood Studios in Buckinghamshire, we are used to A-list films being shot in the county, however, it's still exciting when the films feature actual spots from the county. Interestingly, both James Bong and Bridget Jones filmed scenes at the same country club in Buckinghamshire - despite those films being...

Mom Captures Her Babysitter on Camera and Can't Help Crying

Wow! This teenage babysitter could star in the next Disney movie because of her angelic voice. When the woman she worked for heard her singing to their daughter, she recorded the shy eighteen-year-old and caught the magic on camera. Nicki Maher had been mesmerized by her babysitter's voice for a...

Star movie actress and singer Cher is one of Hollywood's most successful stars, but her numerous relationships match her talent. Amongst all her lovers, one name stands out the most. 75-year-old screen diva Cher had the world in her arms in the 80s and 90s. As one of the most...