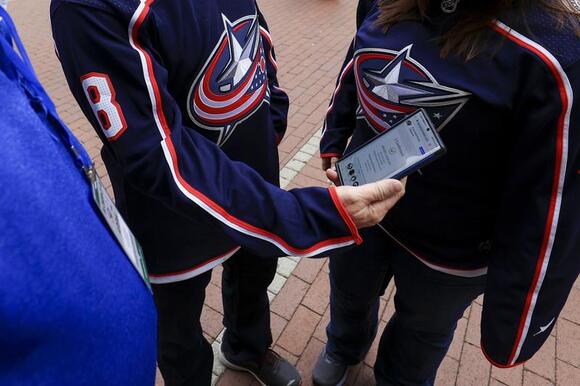 Having won just twice in their previous seven games, the Lightning opened fast with markers from Coleman, Steven Stamkos and Barclay Goodrow inside the first six minutes.

Ryan McDonagh registered the first of his two goals in the final second of the period for a commanding 4-1 edge for Tampa Bay, which improved to 3-3-0 against Columbus with the victory.

Yanni Gourde’s career-high four assists lifted him past the century mark for helpers in his NHL career (102).

Jack Roslovic produced a goal and two helpers, and Michael Del Zotto, Zach Werenski and Max Domi scored for the Blue Jackets, who slipped to 1-4-0 in their last five games.

With their early three-goal salvo, the Lightning chased Columbus goalie Joonas Korpisalo, who stopped just three of six shots. Elvis Merzlikins took over and made 21 saves, plus added an assist on Del Zotto’s goal.

In their last regular-season game in Columbus, the Lightning broke out of a scoring slump when Gourde led a two-on-one in the match’s first minute and saucered a pass that Coleman neatly put away for his eighth goal.

The visitors soon made it 3-0 within a one-minute span.

Stamkos notched his team-leading 17th goal on their first power play -- his 10th on the man advantage -- and Goodrow’s sixth tally at 5:41 ended the night for Korpisalo in favor of Merzlikins.

Del Zotto collected his third on a wrister to give Columbus some life at 17:21, but McDonagh’s last-second tally on a loose puck near Merzlikins left it 4-1 after one.

In the second, Colton’s momentum off an odd-man rush pushed in his sixth this season at 4:54 for a 5-1 lead, but Roslovic’s sharp-angle tally -- his eighth -- was matched by McDonagh’s second of the game at 18:56.

Werenski potted one in close at 10:41 of the third and Domi added another at 19:14, but the comeback fell short and the Lightning instead snapped their two-game losing streak.

2:55 p.m. - The Bruins are reportedly signing a pair of bottom-six forwards in Erik Haula and Tomas Nosek. Read more about them and the signings here:. 2:05 p.m. - The Canadiens, as expected, have lost their No. 2 center, with Phillip Danault heading to the Kings on a six-year deal.

On Monday, we took a look at the prediction from Sportsnet's Elliotte Friedman that the Bruins would sign defenseman Derek Forbort. Now, hours before the start of free agency at noon on Wednesday, Friedman is back with an even spicier free agent prediction for the Bruins: Blake Coleman. In his...

For the first time since the Pittsburgh Penguins did it in both the 2016 and 2017 playoffs, the NHL had the Stanley Cup successfully defended. The Tampa Bay Lightning won their second straight Cup by defeating the Montreal Canadiens in five games. It was another memorable run for the franchise...

On the Rangers and Casey Cizikas, Blake Coleman – it doesn’t make sense

While there is nothing concrete or even rumored connecting the Rangers to Casey Cizikas, Blake Coleman, or other big name depth signings, there is always that fear that the Rangers will do something stupid. With the move toward grit and defined roles, that fear is compounded. Barclay Goodrow was overpaid, even if extremely useful, the draft was a minor shift in philosophy, and there is still no transparent plan that we can identify. It doesn’t mean there isn’t a plan, it just means we don’t know it yet, or it might be a bad plan.

The Calgary Flames signed forward Blake Coleman to a six-year, $29.4 million deal on Wednesday. Coleman is fresh off winning

(Photo by Christian Petersen/Getty Images) The New Jersey Devils might make some more moves over the next week. Dougie Hamilton is the big free agent that fans want to see them land but there are some other transactions to be made as well. One of them could be the signing of Blake Coleman. Of course, the man known as “pickles” around these parts used to play for the New Jersey Devils before being traded to the Tampa Bay Lightning. Since that move, Coleman and the Lightning have won back-to-back Stanley Cups.

The Calgary Flames have reportedly made a big splash in free agency. The Athletic’s Pierre LeBrun is reporting that the club has signed unrestricted free agent Blake Coleman. Confirming that Blake Coleman is headed to Calgary. — Pierre LeBrun (@PierreVLeBrun) July 28, 2021.

Free agency is now just a few days away and many teams are already looking ahead to when it opens up. There will be several prominent players set to hit the open market in late July while many teams have key restricted free agents to re-sign as well. The Lightning have cleared a little bit of money through expansion, but still don’t have much to retain their pending free agents.

The last time Blake Coleman was acquired by a team, he was considered the “final piece” needed to complete Tampa Bay’s Stanley Cup puzzle. Two championships later, the 29-year-old forward is coming to Calgary with slightly less fanfare. A whole lot more money, though. The two-time 20-goal scorer will be...

The Buffalo Sabres Could Lose These Players By Friday

The Buffalo Sabres are about to embark on a very busy next week. General Manager Kevyn Adams will have plenty of huge decisions to make in regards to the roster, as will all the NHL general managers. The NHL Expansion Draft will take place this Wednesday, July 21st at 8...

The Buffalo Sabres continue to try to move disgruntled forward Jack Eichel. They're not letting him go for free though obviously and are standing firm of their price of 4 1st round picks or a mix of players, picks and prospects that would be the equivalent. Two teams seem to...

The Boston Bruins are trying to get things together to make another Stanley Cup push. While it seems the team will miss out on veteran defenseman Ryan Suter, the team has locked up Taylor Hall and have something pretty much done with David Krejci. General manager Don Sweeney and president...

Teams Dropping Out, Jack Eichel Trade Down to Two Clubs

Elliotte Friedman provided some updates on the latest trade chatter when it comes to Buffalo Sabres center Jack Eichel. Noting that things have been a little quiet on the Eichel trade front with all the talk of the NHL Expansion Draft, Friedman says teams are actually pulling away from discussions with the Buffalo Sabres and there aren’t a lot of teams left for Sabres GM Kevyn Adams to negotiate with.

The Chicago Blackhawks rebuild seems to be over as they continue to add some big pieces to the lineup. We've seen the acquisitions of Marc-Andre Fleury, Tyler Johnson and Seth Jones over the last couple of days and Blackhawks general manager Stan Bowman is expected to be busy today as free agency opens.

The Chicago Blackhawks have been very active so far this offseason. By now, you know about Seth Jones, Marc-Andre Fleury, Tyler Johnson, and Caleb Jones. You have also heard about the subtractions, some big names like Duncan Keith and Nikita Zadorov are on the way out. Well, it seems like they are all in on making sure that their defense is better going forward. They are signing Jake McCabe to a four-year contract with a four million dollar cap hip hit.

Chicago Blackhawks: Tyler Johnson trade makes no sense at all

The Chicago Blackhawks made a very interesting trade on Tuesday night. In fact, you can claim it was a terrible trade on the part of Stan Bowman because it was. They acquired Tyler Johnson and a 2023 second-round pick in exchange for the rights to Brent Seabrook who is retired. It is a trade that makes absolutely no sense on the side of the Blackhawks.

There will be plenty of goalie movement with the opening the NHL free agent market. The Maple Leafs and Hurricanes got the ball rolling by swapping netminders, while the Canucks signed a veteran backup for Thatcher Demko. The Maple Leafs will pair Petr Mrazek with Jack Campbell in their net...

The Buffalo Sabres have lowered the asking price on Jack Eichel. I gathered back in late June that GM Kevyn Adams was trying to generate more interest in his injured and disgruntled star, and now Elliotte Friedman is confirming that in his latest podcast. It’s the first real sign that...

Alex Goligoski's NHL address has changed, but the veteran defenseman won't need to make an offseason move. The Grand Rapids native spends his summers in Minnesota, and Goligoski gets to stick around for the season after signing a one-year, $5 million contract with the Wild once free agency opened for business.

Entering his 15th season in the NHL, Alex Goligoski found his first experience as a free agent to be more stressful than he expected or preferred. The landing spot made it worth the hassle. The left-shot defenceman agreed to terms on a one-year, $5 million contract Wednesday with the Minnesota Wild, his home state team. This season, Goligoski will become the 28th native of Minnesota to play in a game for the Wild.