The latest coverage of Clemson athletics 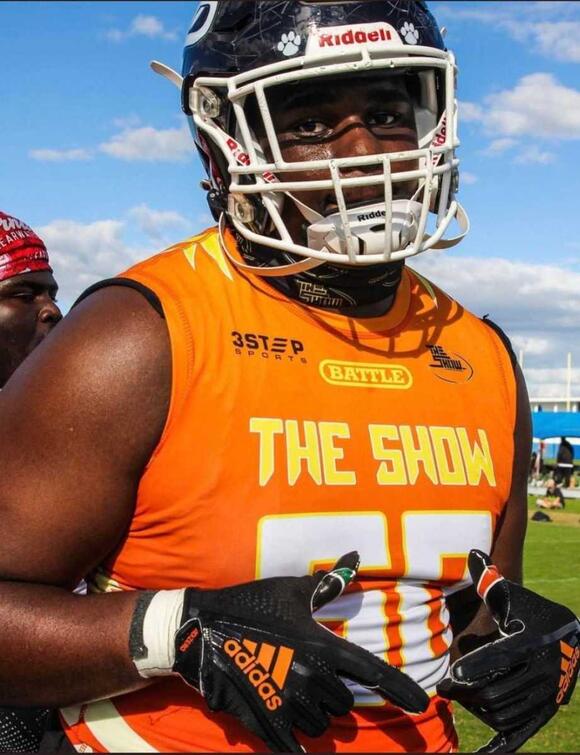 One of the top offensive line prospects in the country for the 2023 recruiting cycle was on hand for the Tigers' spring game last weekend.

Payton Kirkland, out of Orlando, made the trek to Clemson with another elite-level prospect and fellow Floridian, 2023 DE Derrick LeBlanc.

It was Kirkland's first trip to the campus and the rising high school junior came away thoroughly impressed. So impressed that the 6-foot-7, 315 pound offensive lineman, who is widely considered to be a Top-100 prospect, is hoping to get back to town over the summer if schools are allowed to host camps.

"It was a great environment and I thought it was like a beautiful campus," Kirkland told All Clemson. "It is a great place to be at because you can really focus on a lot of the things that you have to do. I'll probably be back up there in the summer, probably June."

The dead period currently in place prevents recruits from having any face-to-face contact with coaches. Although, Kirkland does have a close friend on the Tigers' roster in defensive tackle Tyler Davis, who is also from Florida, and the two got to spend a lot of time together over the weekend.

"We just like drove around the campus and stuff like the city area, and (Davis) answered some questions about it," Kirkland said. "Then went to a restaurant with him and his family and then we just talked a little bit of football, positions and stuff."

Kirkland met Davis while the two were training together down in Florida. They have developed the kind of friendship that allows them to stay in contact, and they are regularly checking in on one another.

"Really just competing against each other at training and stuff like that," Kirkland said. "Just out there competing, trying to get better, and I met Tyler when he got back in town from school. He checks up on me, just checking up on performances and stuff like that. We started getting a lot closer in the summer, probably going to get back into it when he gets back in town."

While Kirkland already has racked up dozens of offers, the Tigers don't typically offer high school players before their junior seasons. However, that hasn't kept the Clemson coaching staff from keeping in constant contact with the 2023 SI All-American candidate. So far, they have liked what they have seen.

"I hear from Coach Caldwell and Coach Bates probably once a week," Kirkland said. "Coach Caldwell has told me they like my combination of strength, power and athleticism. He said they don't see too many much like me."

If the Tigers do eventually pull the trigger on an offer, Kirkland said it's definitely one that would stand out.

"It would mean a lot," Kirkland said. "I pretty much grew up watching Clemson dominate over these past years and they're a very consistent program. And the players that they produce always... they do well at the next level."

When it comes to making a decision, Kirkland said that he's still far too early in the process, but as it stands currently, he is thinking sometime before his senior season.

"Still trying to figure things out," Kirkland said. "Honestly, I think I'll probably have my decision made around the start of my senior season."

The latest coverage of Clemson athletics

After landing one of the top tight ends in the country last year in Jake Briningstool, the Tigers have once again set their sights on one of the nation's best in 2022. Clemson has offers out to just two uncommitted players at the position in Oscar Delp and Jaleel Skinner, but as the summer months start to wane, it is Delp that the coaching staff appears to have really zeroed in on.

When D.J. Uiagalelei went through the recruiting process, he wanted to make sure whichever school he chose had the pass-catchers to help make him successful. So the Clemson quarterback picked a school that likes to go by "Wide Receiver U" because of the immense talent it's produced at the key position.

Darrell Bevell is still in the very early stages of getting to know what Trevor Lawrence and Travis Etienne are capable of, but the Jacksonville Jaguars offensive coordinator like what he sees from the two former Clemson stars. Bevell met with the Jacksonville media following the second practice of training...

After 'Weird' 2020 Season, This Offseason Felt 'Right' for James Sklaski

CHARLOTTE, N.C. - Football has often been described as the ultimate team sport. After spending most of the 2020 offseason apart and being responsible for their own preparation, the Clemson football team has been back together this spring and summer and sixth-year linebacker James Skalski said that's had a very positive impact when it comes to building team chemistry.

Dabo Swinney on Transfer Portal: 'Grass is Green Where You Water It'

CLEMSON - Dabo Swinney's stance on the transfer portal has been well documented. The Clemson head coach has long maintained that he prefers to recruit high school kids, choosing to reward hard work and loyalty rather than looking for a quick fix. It is an integral part of the foundation of the culture Swinney has created inside the Clemson program and something he very much believes in.

The Clemson coaching staff continues to add elite-level talent to the 2022 recruiting class. In-state cornerback Jeadyn Lukus committed to the Tigers on Wednesday, choosing Clemson over North Carolina and Ohio State. However, just like it did with Daylen Everette, another highly-touted corner that committed earlier this month, this really came down to a battle between the Tigers and Tarheels.

The next time the calendar flips to the number 28, there will be live college for all the world to see. There are also just five Saturdays between now and Clemson's highly-anticipated Sept. 4 opener with Georgia in Charlotte, N.C. In the latest odds on FanDuel Sportsbook, the Tigers are listed as a 3.5-point favorite over the Bulldogs.

For the first time in several years, Clemson will have a new position coach on the field when the Tigers open up the 2021 season against Georgia in Charlotte. C.J. Spiller is in the process of making the transition from graduate assistant to being Clemson's full-time running back's coach, taking over for offensive coordinator Tony Elliott, who is now overseeing the team's tight ends.

Throughout the Dabo Swinney era, the quarterback run has become a key component of the Clemson offense. Tajh Boyd, Deshaun Watson, Kelly Bryant and Trevor Lawrence were all valuable assets in the Tigers rushing attack over the past decade. Each brought their own unique skill to the offense when it comes to running the ball, and each had a tremendous amount of success using their legs to keep opposing defenses off balance.

Clemson's Streeter on Not Bringing in Transfer QB: 'I Know I Have Enough Guys'

To the casual fan, it might appear that the Clemson Tigers have depth concerns at the quarterback position. After losing Taisun Phommachanh to an Achilles injury in the spring and Bubba Chandler to the MLB Draft, those concerns would on the surface appear to be justified. Many wondered if the Tigers might finally use the transfer portal for the first time in an effort to bring in another arm to help shore up the depth behind starter D.J. Uiagalelei.

D.J. Uiagalelei has never played a game with Clemson receiver Justyn Ross, but that hasn't stopped the Tigers' quarterback from making a strong proclamation about how Ross has looked in summer workouts. "He looks like the best receiver in the country," Uiagalelei said. Ross very well could be that if...

James Skalski thought long and hard before answering a question about which Clemson player will surprise people in 2021. The Tigers senior linebacker decided to go with freshman running back Will Shipley, who's turning heads the summer on the practice fields at Clemson. "Keep an eye on Will Shipley," Skalski...

4 Things We Learned After a Week of Interview

This probably goes without saying, but this Clemson team has a distinctive appearance—focus. They are focused on not ending the 2021 season with a loss. In fact, super-senior linebacker James Skalski stated that not wanting to end his career with a loss was the No. 1 reason that he chose to return for a sixth year. I am not saying that I would bet on this team to win the entire thing, there are way too many variables, but I am saying I haven't seen a team this focused since 2018—when the Power Rangers returned to avenge a loss in the semifinals,

All Clemson has launched a new feature: public forums. Readers can now voice their opinion or ask any question on our new forums, message boards, topics and threads. Interact with each other and hear directly from publisher Zach Lentz, deputy editor Brad Senkiw, recruiting analyst Jason Priester and staff writer Owen Watterson on any subject. We have threads on football, basketball, softball and baseball, plus other sports and even threads for off-topic discussions.

GREENSBORO, N.C. (theACC.com) – Clemson is an overwhelming preseason favorite to claim its seventh consecutive Atlantic Coast Conference football title, according to a preseason poll of 147 media voters. The Tigers, who posted a 10-2 record last season while earning a postseason playoff berth for the sixth consecutive year, were...

One of the biggest recruits in the history of Clemson football has now seen his career come full circle. Legendary running back C.J. Spiller is entering his first season as the Tigers running backs coach and while he is very much looking forward to his duties as a coach on the field, he's also looking forward to the recruiting aspect of his job with the same level of excitement.

If the ACC begins to change the narrative this season that this is a one-team football league with a bunch of mediocre squads, it'll be because of quarterback play. When it comes to the most important position on the field, this conference is loaded with experience. Now, that alone doesn't win games, but the talent level is also higher than it has been in recent seasons.

Desire to be 'Best' Drew Skalski to Clemson

CHARLOTTE, N.C.- A lot of factors play into a high school prospect's decision regarding which college football program he ultimately decides to suits up for. For veteran linebacker James Skalski, it basically came down to his love for the Clemson coaching staff. The product of Northgate High in Sharpsburg, Georgia told the media at the ACC Kickoff in Charlotte that his relationships with head coach Dabo Swinney and defensive coordinator Brent Venables played a vital role in him becoming a Tiger.

News broke that former Florida State Seminoles head coach Bobby Bowden was diagnosed with a terminal disease. The legendary coach spent more than 40 years as a dominant force in college football. "The news came out [Wednesday], but we've known for about 10 days," the University of Louisiana at Monroe...