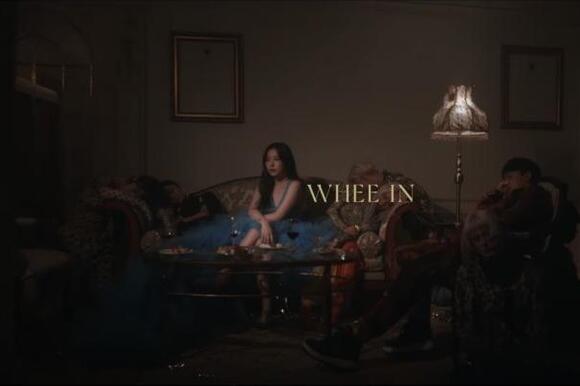 The 25-year-old K-pop star, a member of the girl group Mamamoo, released a preview Wednesday of her video for the song "Water Color."

The preview opens with a camera following Wheein as she walks through a house and passes several people sitting still. The singer wears a blue gown.

"Sometimes I feel like I don't wanna smile," text reads on the screen. "I'm still a dreamer. I draw myself."

Wheein is then seen sitting on a couch as the music changes from moody strings to an uptempo beat.

"Water Color" is the title track from Wheein's forthcoming debut solo EP, Redd. She will release the mini album and the full "Water Color" video April 13.

Despite what Offset says, it appears something did happen backstage between him and Quavo. A new video from Entertainment Tonight captured Cardi B yelling at two unidentified people. “Both of y’all wrong! Both of y’all! This is not right!” Cardi said. “No b*tch, shut the f*ck up ’cause you shouldn’t...
1 DAY AGO
UPI News

Meagan Good talks about how she's received support from Halle Berry and advice from Michael Clarke Duncan on "The Jennifer Hudson Show."
2 DAYS AGO
musictimes.com

Madonna graced the 2023 Grammy Awards stage on Sunday to present another singer's performance. However, she quickly shared a speech to the crowd and those watching from home. The "Material Girl" singer told everybody, "I'm here to give thanks to all the rebels out there, forging a new path and taking the heat for all of it."
2 DAYS AGO
Cinemablend

As Kanye West Was Finally Tracked Down By Lawyers, His L.A. Ranch Is Making Waves For Being An Abandoned Mess

Kanye West's lawyers track him down, as reports on the state of his L.A. ranch make the rounds.
LOS ANGELES, CA・1 DAY AGO
UPI News

What to Watch: 5 shows for Black History Month

New programming during Black History Month sheds light on an aspect of the African American community that may have been overlooked.
2 DAYS AGO
UPI News

A Swiss baker earned a Guinness World Record at a wedding fair by creating the world's largest wearable dress made out of cake.
1 DAY AGO
UPI News

"The Night Agent," a new action-thriller series from "The Shield" creator Shawn Ryan, is coming to Netflix.
10 HOURS AGO
UPI News

'Last of Us' Episode 5 to release Friday on HBO Max

"The Last of Us" Episode 5 will start streaming early Friday on HBO Max.
2 DAYS AGO