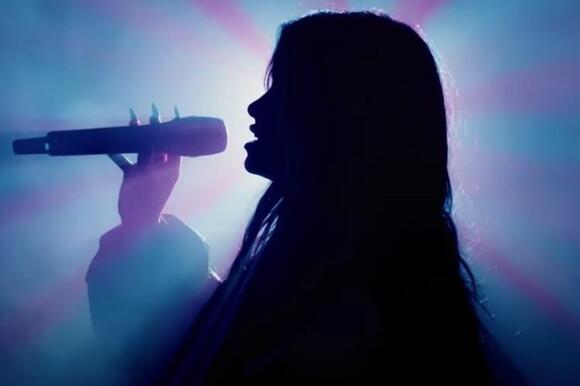 The trio performed the track inside a darkly lit room that was filled with darkly colored lights and fog.

Barrett's silhouette appears at first before she links up onscreen with Barker and then JXDN.

"Does it rain in California?/ Only dream I've ever known/ Will they love you when you're famous?/ Where you'll never be alone/ Hope someday I'll find nirvana/ I'll be looking down below/ I'll be dead at twenty-seven/ Only nine more years to go/ I got a bully in my head/ Fake love, fake friends/ I was broken when you left/ Now you hear me everywhere you go," Barrett sings.

Bonding with the Barkers! Kourtney Kardashian has reached the next level of her relationship with boyfriend Travis Barker’s kids. In a July 17 Instagram Live video, the Blink-182 drummer’s 15-year-old daughter, Alabama, played “Never Have I Ever.” When asked about meeting any Keeping Up With the Kardashians stars, the teenager sweetly said, “That’s my stepmom.”

Travis Barker and Kourtney Kardashian allegedly got married this weekend, according to Kardashian's hairstylist. Stylist Glen Coco made a post alluding to the wedding on social media. This comes amid rumors and speculation that Kardashian is pregnant after Barker was spotted rubbing Kardashian's stomach as the two spent time in Las Vegas.

Cosmic connection! Fans can’t get enough of Kourtney Kardashian and Travis Barker‘s steamy romance — and the couple are just as obsessed with each other as ever. “They’re very much in love and are deeply connected as a couple,” a source tells Us Weekly exclusively. “Their bond is unbreakable at this point.”

Travis Barker's ex-wife Shanna Moakler is ready to move on. The 46-year-old is auctioning off a bunch of items the Blink 182 drummer gave her throughout their relationship, including her engagement and wedding rings. This news comes in light of the rumors that Barker and currently girlfriend Kourtney Kardashian got married on a whim.

Kourtney Kardashian and Travis Barker did not bother to look that they were two friends when they took a stroll that landed them in an outdoor wedding ceremony. Instead of going away, they made sure eyewitnesses have something to talk about by making out in front of their stunned faces.

The mutant Atlanta rap star Young Thug has been a prolific mixtape force for a solid decade, but he’s only categorized one of his releases, the 2019 hit So Much Fun, as a straight-up studio album. So it’s notable that Thug his now making another album — his second, at least according to him — and that he’s calling it Punk. (He first announced that album title in 2019.) Thug started out as a challenging, boundary-pushing presence, and he now appears to think of himself as a rock star. Paradoxically, an album called Punk seems like the most retrograde thing that Young Thug could do, especially since it seems like Travis Barker will be involved.

Kourtney Kardashian and Travis Barker are back from a romantic trip to Vegas filled with a lot of inexplicable vampire references, and fans think they might be engaged. Which... maybe? Honestly, there's a lot of "evidence" to get through here, so let's jump in. Exhibit A:. Apparently hairstylist Glen Oropeza...

Young Thug showed off his skills in an all-new, botanical-style NPR Tiny Desk performance that premiered on Tuesday (July 27). Recorded at the Houdini Estate in Los Angeles, the rapper performed four new songs -- "Die Slow," "Droppin Jewels," "Hate the Game" and "Tick Tock" -- each with a punk-rock-infused twist, thanks to the band Damnage Gooods and drummer Tosh Peterson. Thug was then backed by Travis Barker on the drums when he delivered yet another rock-star live rendition of his final track of the set, "Ski." Barker closed out the song and the show with an impressive drum solo. "Ski," which debuted in April, peaked at No. 18 on the Billboard Hot 100.

Kourtney Kardashian and Travis Barker's recent Las Vegas trip gave the world more than a televised French kiss and surprise “I want to suck your blood” Instagram exchange between them: It sparked engagement rumors. Barker's daughter Alabama ignited the theory, sharing a shot of Kardashian and Barker in Vegas that came off like a congratulations post. She wrote, “So happy for you guys ❤️❤️ 🥺🥺” alongside a photo of them. Kardashian and Barker didn't publicly comment on engagement speculation, but multiple sources spoke to TMZ about it days later. They made it clear that no, there was no secret proposal that happened.

Pop-punk revivalist Jxdn rang in his first live show ever at the Roxy Saturday night with a slew of special guests, including Blink-182 drummer and mentor Travis Barker, rapper Iann Dior and singer Nessa Barrett. The show was a short hour-long event, with no opening acts, but still packed a...

WILLOW performed a special virtual concert to celebrate the release of her fifth album, lately I feel EVERYTHING. The show was available live July 16 by using the Watch Together feature on Instagram and Facebook Messenger. Now, you can view WILLOW’s first performances of songs from the album here on Facebook Watch.

Willow has performed her song ‘Grow’ with Avril Lavigne and Travis Barker for the first time – scroll down to watch the performance below now. The track features both veteran pop-punk musicians and appears on Willow’s new album, ‘Lately I Feel Everything’, which was released today (July 16). To celebrate...

At this point, seeing Kourtney Kardashian and Travis Barker's PDA is like seeing a goldendoodle on the street — once a rare novelty, but now a dime a dozen. Fans however, have reason to believe that new photos of the couple in Vegas are special because the two might have secretly gotten married.

But no wedding with Travis Barker

A few days ago, the whole social media world was in turmoil! The reason: speculation about a possible engagement, or even wedding of Kourtney Kardashian and Travis Barker. But now there is an all-clear. Because an insider is said to have revealed that there is nothing to the rumors. Although...

Blink-182 drummer, solo artist and producer Travis Barker has signed a worldwide administration deal with Warner Chappell Music, it was announced Thursday (July 22). In a statement, the California-born pop-punk star said he's "stoked" to be working with everyone from WCM. The go-forward admin deal covers the drummer's future works...

Young Thug has been talking a lot of talk about his upcoming album Punk, and at his NPR Tiny Desk (Home) Concert, he started walking the walk. Thugger performed four new songs — including “Die Slow,” “Droppin Jewels,” “Hate the Game,” and “Tick Tock” — rapping over some heavy riffs and backed by a full rock band. But the punkest moment didn’t come until the end of the set, when Young Thug brought out pop-punk elder statesman Travis Barker to drum on an amped-up rendition of his Slime Language 2 hit “Ski.” During the performance, Thug also announced an October 15 release date for Punk, flaunting it on the back of his shirt. Until then, we’ll be crossing our fingers that Barker makes it onto the record.

Nearly two years after he first announced it, Young Thug has finally set a release date for his album Punk. The rapper donned a jacket with the album title and a release date of Friday, October 15 during a recent Tiny Desk performance alongside ​​blink-182 drummer Travis Barker. During his...

The social media world was in turmoil a few days ago over an engagement rumor surrounding the Kardashians. But now the rumor is being cleared up. According to insiders, there was no engagement despite clear indications. Was there a lightning wedding?. Kourtney Kardashian and Travis Barker haven’t let anything burn...

Over two months after Lil Baby and Kirk Franklin released their Space Jam: A New Legacy contribution “We Win,” the pair have finally dropped a video to accompany the single. The video combines footage from the LeBron James and Looney Tunes-starring film with shots of Franklin and Lil Baby performing the track on a basketball court. Lil Baby previously told Rolling Stone of the collaboration, “Working with a legend like Kirk Franklin was cool. I’m proud this is a song that my grandma and kids can listen to, while at the same time I’m still being authentically me. I’m always looking to grow...

Kourtney Kardashian & Travis Barker have captivated fans everywhere with their whirlwind romance. Here’s a look at their relationship, from the start.