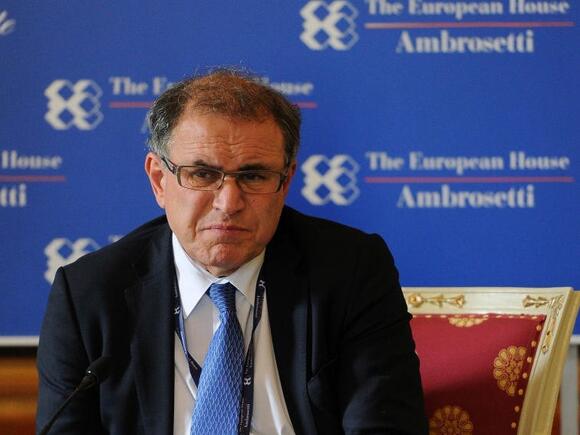 Nouriel Roubini, an economist known as "Dr. Doom" for his pessimistic market views, said markets are "extremely frothy" and participants are taking "too much risk" in a recent interview.

Roubini sat down with Bloomberg to discuss market conditions, the fallout from the Archegos blow-up, and fiscal and monetary policies on Tuesday.

The NYU professor and chairman of Roubini Macro Associates LLC said, "We're in a situation where financial markets are extremely frothy. We have either zero policy rates or negative policy rates in advanced economies. In spite of a pickup in long rates, financial conditions are very easy. And we're seeing widespread frothiness, bubbles, risk-taking, and leverage."

Roubini noted the stock market is trading at cyclically adjusted PE ratios "we haven't seen since 1999 or 2000 when there was a bust of bubbles," and said equity market frothiness has shifted to other markets creating bubbles in SPACs, cryptocurrencies, and hedge funds.

When asked about what could cause "the froth to come off" of equity markets moving forward, Roubini highlighted the "Fed and Treasury experiment" of massive fiscal stimulus and monetary stimulus, arguing there "is a risk the economy could be overheating."

The economist said that if the yield on the 10-year Treasury rises above 2% by the end of the year, causing a rise in real yields, that it could be "the shock that actually hits equity markets in the US and globally."

Roubini also said that the next two or three years could see "a series of negative supply shocks" that may lead to "inflation and then stagflation."

The NYU professor noted that tensions between the US and China, "deglobalization", and an aging populous in advanced economies could "reduce potential growth" and "increase the cost of production" leading inflation to rise "well above the targets of central banks."

Roubini criticized the Federal Reserve arguing they could be unable or unwilling to raise rates if inflation does rise because high levels of private and public debt would lead to a "financial crash" if they did.

When asked about the recent blow up of the hedge fund Archegos, Roubini said he agrees with Guggenheim's Scott Minerd that another family office is likely to blow up given the risk-taking in the current market.

"Yeah, I would agree with that assessment. I think there are lots of players that have taken too much leverage, too much risk, and some of them are going to blow up," Roubini concluded.

The rapid growth the U.S. economy has seen is about to hit a wall

Gross domestic product is expected to accelerate 9.2% for the April-to-June period. That's likely, however, to be the peak for pandemic-era growth. Economists see a gradual reversion to the mean for the U.S., which is more used to growing closer to 2% than the much stronger levels it has turned in during the reopening.

Wall Street bears are back and looking for lower gold prices

(Kitco News) - A growing divergence in global interest rates, which is supporting the U.S. dollar, is generating some bearish sentiment among Wall Street analysts even as retail investors remain bullish on the precious metal. This past week the European Central Bank reaffirmed its commitment to maintain its ultra-loose monetary...

Stagflation is ‘a legitimate risk’ that would be painful for U.S. markets

Stagflation has moved onto the radar screen of some market analysts.

NEW YORK, July 22 (Reuters) - The dollar edged higher overall in choppy trading on Thursday, moving with the ebbs and flows of risk sentiment, while the euro fell as investors digested the European Central Bank statement and comments by its president. The U.S. currency hit its highest level in...

- But vulnerability lingers beneath 1.1825, 1.1880. Money transfer specialist rates (indicative): 1.1650-1.1678. More information on securing specialist rates, here. The Euro-to-Dollar exchange rate’s ongoing resilience has divided opinion among analysts as the market’s attention shifts toward July’s policy decision from the Federal Reserve (Fed), which is the next test of whether the single currency can continue to defy the gravitational pull of the greenback.

Investors’ Risk Appetite Is At An All-Time High. That Could Be A Problem.

Two months. That’s how long the pandemic-triggered recession lasted, from February to April 2020, making it the shortest economic downturn in U.S. history, according to the National Bureau of Economic Research’s (NBER) Business Cycle Dating Committee. For those scratching their heads, the NBER makes clear that this does not mean...

NEW YORK, July 22 (Xinhua) -- Inflation in the United States is reaching decade highs, and drawing concerns from investors and experts as well as ordinary consumers, who believe the country's inflationary pressures are underestimated and the Federal Reserve's inflation management framework should be questioned. IMPACTS ON DECISION MAKING. High-flying...

Yesterday, the European Central Bank (ECB) re-affirmed that it has no intention of raising interest rates for the foreseeable future. Markets didn’t especially care. The euro’s value against the dollar – probably the best barometer of whether anything about the move came as a surprise – was barely changed. And...

Wall Street stocks edged higher for a third straight session Thursday after a plethora of earnings reports, while leading bourses on the other side of the Atlantic climbed as the European Central Bank pledged to keep support in place for longer. A busy day of US results featured companies from...

The Federal Reserve will start scaling back asset purchases next year with an emphasis on mortgage-backed securities, according to economists surveyed by Bloomberg, who see the central bank raising interest rates at a quicker pace through 2024 than previously thought. Slightly more than half expect MBS tapering will happen proportionally...

September and October are likely to be "very rough" months for stocks, the chief investment officer told Bloomberg.

The recovery in risk assets continued this past session, but it still looked like a ‘mere recovery’ rather than charged bull as the SPX tempo slackened. Event risk will pick up against starting this session with the ECB rate decision on tap, but EURUSD may not be the top option for volatility.

Now and then, it pays to take a step back to get a broader perspective on things, to look beyond the daily financial news, to see through the short-term ups and downs in the market to find out what is really at the heart of the matter. If we do that, we will not miss the fact that we are living in the age of fiat currencies, a world in which basically everything bears their fingerprints: the economic and financial system, politics—even people’s cultural norms, values, and morals will not escape the broader consequences of fiat currencies.

Worries over rising prices on everything from cars to plane tickets to washing machines are overblown for now, a senior Bank of America Merrill Lynch economist said Wednesday. Michelle Meyer, the head of U.S. economics at Bank of America Global Research, told a webinar hosted by the Wall Street bank and its Merrill Lynch wirehouse unit that “thus far, most of the evidence suggests the inflation spike we’re seeing is temporary.”

A volatile environment for government bonds is reflecting worries about both slower growth and stubborn inflation. Stagflation, a relic of the 1970s when inflation was high and economic growth slowed, has reemerged in market talk recently. While many market veterans see inflation leveling off, fears remain about a low-growth environment...

The US dollar slid, while equities gained on Wednesday and during the Asian session Thursday, perhaps due to further easing of concerns over the fast-spreading coronavirus. As for today, all the attention may fall on the ECB decision. Considering the subdued core inflation rate, the dovish remarks by several policymakers, and the change in their inflation objective, we believe that the Bank will highlight once again the need for extra-loose policy for longer.

Hold on to your gold; a Fed rate hike in 2023 could be too little too late for inflation - VanEck's Joe Foster

Editor's Note: With so much market volatility, stay on top of daily news! Get caught up in minutes with our speedy summary of today's must-read news and expert opinions. Sign up here!. However, one fund manager says that the rally in the gold market is far from done as there...

As Yields Fall to Fresh Lows, Consider the BND ETF

Treasury yields have been falling to new lows as of late, but ETF investors can still capture the moves with the Vanguard Total Bond Market Index Fund ETF Shares (BND). Another rise in Covid-19 cases has been spooking investors, leading to heavy sell-offs in stocks. “U.S. Treasury yields continued to...

The ECB kept the pedal to the floor and said it was fine with inflation rising above 2% for a while, so long as it stabilized near that level.