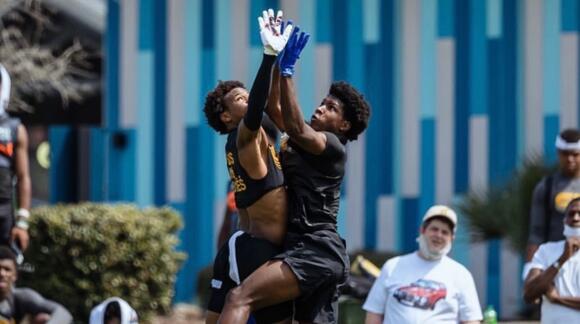 Last month, the Pot of Gold event helped Notre Dame build relationships with many of the best 2023 prospects in the country. That includes Roswell (Ga.) High School standout cornerback Ethan Nation, who is developing a strong early bond with the Notre Dame program.

Ranks as the No. 109 player and No. 10 cornerback in the country by 247Sports, Nation holds offers from schools like Alabama, Auburn, Florida, Florida State, Georgia and LSU, so he's a highly coveted prospect that Notre Dame is recently turning the heat upon on.

Nation, who stands 6-0 and 175 pounds, first heard from the Fighting Irish staff in mid-February. At that time, Nation connected with Notre Dame cornerbacks coach Mike Mickens while the Roswell star was walking around the track after school. During that conversation Mickens offered Nation a scholarship, a moment that he called "shocking."

“[Mickens] said that ... I'm one of the main prospects of 2023s,” Nation told Irish Breakdown. “We talk every Wednesday at 4 o'clock, so I'm just building that relationship week-by-week.”

Though Nation has offers from over 30 schools, the crafty defensive back doesn't see Notre Dame as just any other school. In fact, Nation mentioned a few aspects that help separate the Fighting Irish from the rest of the field.

“They can win and they can develop players to get them to the league,” Nation said. “They have a winning mindset and how strong their connection is with their teammates and players and other student athletes on and off the field with their coaches.”

That player-coach relationship is one that Nation said he's working on building with the ND staff, but it can be difficult to do so over Zoom. That said, the four-star is looking to start visiting programs once the dead period ends on June 1. Nation plans on initially visiting closer schools in Georgia, Alabama and Florida before moving further North.

With the visitation period opening up, Notre Dame is going to have a busy Summer hosting both 2022 and 2023 prospects on campus for the first time in over a year.

Various recruits such as 2023 Bradenton (Fla.) IMG Academy wideout Carnell Tate have scheduled self-guided tours around South Bend, but these visits are much less interactive than that of the traditional variety So, ND will work to get talented prospects like Nation on campus again over the next few months in a more formal setting.

It’s the sound of hearts breaking across Philadelphia and the state of Pennsylvania… and let’s be honest, everywhere else in the country, too. Eagles quarterback Jalen Hurts made a very rare public appearance with his girlfriend Bryonna “Bry” Burrows after the NFC Championship game this past Sunday, which is a surprise to many fans, as he is extremely private about his life outside of football.
PHILADELPHIA, PA・10 HOURS AGO
IrishBreakdown

Here is the latest news from this past week from Notre Dame football recruiting
SOUTH BEND, IN・1 DAY AGO
IrishBreakdown

Former Notre Dame stars Isaiah Foskey and Jarrett Patterson both have a chance to boost their NFL Draft stock at the Senior Bowl
SOUTH BEND, IN・4 HOURS AGO
IrishBreakdown

Patrick Mahomes' wife, Brittany, wants all the smoke.  Brittany, who's never been afraid to speak her mind on social media, just posted a message for the Bengals.  Hint: It's not very friendly.  "Cancun on 3," she said on Twitter.  "Cancun on 3" has become a trendy phrase in the ...
CINCINNATI, OH・1 DAY AGO
IrishBreakdown

Former Notre Dame standout Jayson Ademilola impressed at the NFLPA Bowl as he prepares for the 2023 NFL Draft
SOUTH BEND, IN・1 DAY AGO
IrishBreakdown

The Irish 2024 defensive line board expanded on Monday with Missouri standout Kellen Lindstrom
SOUTH BEND, IN・22 HOURS AGO
IrishBreakdown

The Fighting Irish had held at No. 7 the previous three weeks
NOTRE DAME, IN・1 DAY AGO