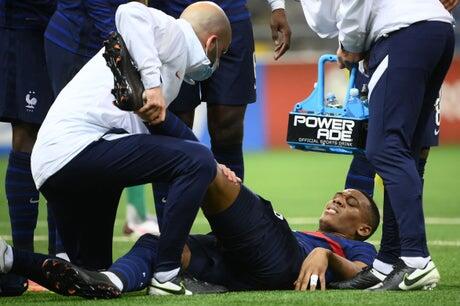 Anthony Martial will potentially miss the rest of Manchester United’s season after suffering a knee injury while on international duty with France.

Martial was not part of United’s squad to play Brighton and Hove Albion at Old Trafford in Sunday’s late kick-off and Ole Gunnar Solskjaer confirmed that the 25-year-old’s problem was more serious than first feared.

"Unfortunately he's sprained his knee with France,” Solskjaer told MUTV. “It’s always when they go away on internationals… you can keep your fingers crossed and hope they come back fit.”

“Losing Anthony for what might be the rest of the season is very disappointing, especially when the reports and signals from [France] were that it wasn't serious but it looks like a bad one.”

Martial was forced off during the second half of France’s 2-0 World Cup qualifying win over Kazakhstan in Nur-Sultan last Sunday.

The United forward, who had set up Ousmane Dembele’s opening goal, continued for a few minutes after suffering the initial injury but was soon replaced by Kylian Mbappe.

A video uploaded to Instagram on Sunday by Martial’s wife Melanie Da Cruz showed him wearing a large protective brace around his left knee.

The injury leaves Solskjaer reliant on Edinson Cavani as his first-choice central striker, with Marcus Rashford and Mason Greenwood able to deputise up top.

Both Cavani and Rashford have struggled with injuries at times this season.

Rashford is carrying a shoulder problem which may require surgery after this summer’s European Championship, while Cavani has played just two of United’s last six Premier League games due to fitness issues.

Thibaut Courtois savagely questioned whether Anthony Martial is a 'star player' after the Manchester United and France striker was suggested as one by his Belgium team-mate Jan Vertonghen. The Real Madrid goalkeeper and former Tottenham centre-back were asked to name the biggest stars to miss out on Euro 2020 in...

Birmingham City have made their sixth summer signing by bringing in Manchester United's young Dutch winger Tahith Chong on a season-long loan. The Netherlands Under-21 international has made 16 first-team appearances for United since making his debut against Reading in an FA Cup third round tie in January 2019. He...

Marcus Rashford injury: How long Man Utd striker could be out after shoulder surgery – and when he is due back

Marcus Rashford is set to miss the start of the 2021-22 Premier League campaign as he requires surgery to fix a long-term shoulder issue that hampered him during the second half of last season. The 23-year-old has had a muscle tear in his left shoulder since the end of November...

Thibaut Courtois aimed a dig at Anthony Martial claiming that the Manchester United forward isn't a "star player" when questioned by Belgium team-mate Jan Vertonghen. Martial was one of the big names to be left out from France's Euro 2020 squad following a disappointing 2020-21 campaign for the Red Devils with injuries and a lack of form limiting him to just seven goals across competitions.

Some Manchester United fans have reacted to the news that Marcus Rashford could miss the first two months of the new Premier League season due to a shoulder surgery. The England international has been playing through the pain barrier since November last year after suffering a muscle tear in his left shoulder.

New Direction? Derby boss Wayne Rooney invites former One Direction pop star Niall Horan into pre-season training... with the Rams fan confident he can see what the former Manchester United striker 'is trying to do shape-wise' at Pride Park

Derby County may have struggled to stay in the Championship last season, but manager Wayne Rooney believes he may have found the ticket to get them heading in the right direction again. The Rams only secured survival in the second tier on the final day of the season after drawing...

Rashford suffered shoulder injury in latter half of 2020-21 He had a scan Tuesday that showed severe damage. Manchester United forward Marcus Rashford is reportedly set to undergo shoulder surgery ahead of the 2021-22 season. The surgery could keep Rashford out of action at least until October, reported BBC Sport.

Manchester United have revealed their kit for next season, as they attempt to win the Premier League for the first time since 2013. United came the closest they've been to the title in eight years last season, when they finished second behind Manchester City by 12 points. However it's not...

What next for Anthony Martial?

There is much uncertainty over Anthony Martial’s future at Old Trafford. With so much moving forward for the club there is a feeling yet that the French forward, once Manchester United’s Golden Boy, will soon be surplus to requirements. According to some rumors, he may already be considered expendable. It is important to remember however that we are not far removed from what was considered Martial’s true coming of age. In 2019/20 Anthony Martial scored 23 goals in all competitions, including 17 in the Premier League. He was crucial during Project Restart, which saw Ole Gunnar Solskjaer’s side clinch a 3rd place finish in the league, and reach the semi-finals of both the FA Cup and UEFA Europa League. This past season however saw a dramatic and unexpected drop.

As Manchester United returned for pre-season training in early July, Anthony Martial was conspicuous in his absence. The 2020-21 campaign was arguably the toughest season of his career at Old Trafford and he missed out on France’s Euro 2020 squad. Given his disappointment and injury troubles, it was expected that...

Man United rumors: Striker ‘identical’ to Lionel Messi is requesting a major favor. A Manchester United striker doesn’t appear to think he’ll be successful at the club. Facundo Pellistri, who was hailed as one of Manchester United’s most exciting recruits last year, now wants to go abroad. Pellistri joined the...

Leicester City have signed Manchester United striker Jess Sigsworth as they continue preparations for their first season in the Women's Super League. The 26-year-old played 66 games in all competitions during a three-year spell at United, scoring 26 goals. She said: "It's a club with a massive ambition. They did...

Wayne Rooney warns Ole Gunnar Solskjaer: 'There will be a lot of pressure for Manchester United silverware this season'

Wayne Rooney has warned his former team-mate Ole Gunnar Solskjaer that he will be under pressure to deliver silverware for Manchester United in the new season. The United legend managed his Derby County side against Solskjaer’s United in a pre-season friendly, which the Premier League giants won 2-1 at Pride Park on Sunday.

Manchester United will kick off their preparations for the 2021-22 campaign with a pre-season trip to Derby County on Sunday afternoon. Derby narrowly escaped relegation from the Championship on the last day of the season, with a 3-3 draw against Sheffield Wednesday, and our last memories of watching the Reds came with a disappointing defeat on penalties against Villarreal in the Europa League final.

Jesse Lingard in Manchester United plans for next season - Solskjaer

Manchester United manager Ole Gunnar Solskjaer has said Jesse Lingard is part of his plans for next season. Lingard impressed on his return to the team following a loan spell at West Ham United after playing the second half in a 2-1 win over Derby County at Pride Park on Sunday.

Manchester United manager Ole Gunnar Solskjaer says Marcus Rashford has gone away to "reflect" on whether to have surgery at the end of the month. Forward Rashford saw a specialist last week and feels an operation is the only way of dealing with a shoulder problem that has troubled him for seven months.

Saul Niguez's agent 'is in contact with Manchester United and Liverpool' over a move for the Atletico Madrid star... despite Barcelona desperate to swap Antoine Griezmann with the Spain midfielder and offload the France striker's £300,000-a-week wages

Manchester United and Liverpool are reportedly in contention to find Atletico Madrid midfielder Saul Niguez. As Sportsmail reported on Wednesday, Barcelona and the LaLiga title winners are in advanced negotiations about the swap deal of the summer, with Saul moving to the Nou Camp and Antoine Griezmann returning to the Wanda Metropolitano.

It all still seems a bit up in the air on the injury front. Ole Gunnar Solskjaer has issued an update on Marcus Rashford’s injury, and it has created more questions than answers. Speaking after Manchester United’s 2-1 win over Derby County on Sunday afternoon, Solskjaer was asked about Rashford,...

A Manchester United wonderkid will have the chance to become part of the senior team this season. Ole Gunnar Solskjaer’s squad is stacked with a wide array of young talents. Heading into the pre-season, the Norwegian is keen to see who would tick a lot of boxes and join the first team.

Manchester United legend and current Derby County manager Wayne Rooney has said the Red Devils have a 'good shot at winning the Premier League' next season. Man Utd finished second, behind eventual champions Manchester City, in the Premier League table last season, and the Old Trafford-based outfit will be aiming to reach the summit next season.