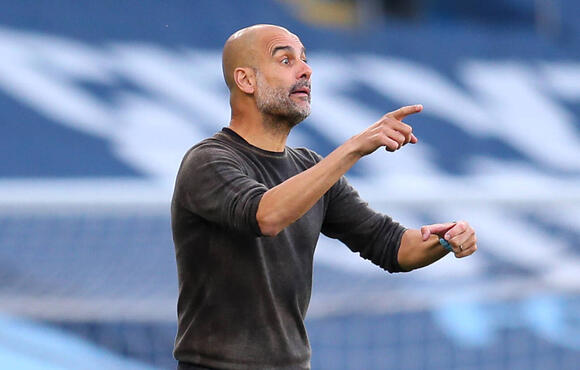 The wait is over! As the long, arduous two-week international break comes to an end, we can look forward to the return of Premier League action as Manchester City travel to the King Power Stadium.

Having played one game more, City sit two places above Leicester City in the table - ahead by 15 points. With the top spot all but confirmed, the Foxes are battling to ensure they finish in the top four and earn a valuable place in the Champions League next season.

The last time these sides faced each other was at the start of the season, back when unexpected scorelines were the norm, and Leicester came out 5-2 victors. Since then, City’s defence has been transformed by the arrival of Ruben Dias and the resurgence of John Stones, leading to 16 clean sheets and just 15 goals conceded in the league from that game onwards.

The whole squad is available, but match fitness may be in doubt following the round of World Cup Qualifiers, this could be the most difficult starting eleven to predict all season. Add to that the fact that City’s arguably most important game is just three days later.

That being said, we need to make a prediction, and here it is…

In goal it has to be Ederson. The Brazilian should be rested and raring to go ahead of the difficult fixtures that lie ahead. The FA Cup semi-final and League Cup final will provide Zack Steffen with game time, so Ederson should be picking up the remaining Premier League and Champions League games until the end of the season.

We’ll see the biggest impact of the international break in City’s defence. Many of the usual starters travelled and played for their respective countries. As a result, we’re likely to see Aymeric Laporte and Nathan Aké, who didn’t play for their national sides, feature in this game. Both are left footed, but with Guardiola mainly opting for three at the back while one full-back pushes forward, you can feasibly play Aké out on the left and Laporte commanding the centre.

To accommodate this unusual left-footed pairing, we’ll see one of our mainstays alongside them in Ruben Dias. Both the Portuguese centre-back and his best mate John Stones started all three matches for their countries but, out of the two, it's the Englishman who tends to be rested more often.

That leaves City's right-back as the one left to push up the pitch and contribute in attack. This is a difficult as Walker has played fewer matches lately, but considering the sheer quality of his game in this position, the choice has to be Joao Cancelo.

In defensive midfield Rodrigo should be ready after only starting one game for Spain, but I think Pep will elect to go with Fernandinho. A lot has been made of the value his voice brings to the team, and he put in a man of the match winning performance against Everton before the break. Rodri may be the preferred option, but our 35-year-old Brazilian still has what it takes to shine in a big game like this.

Alongside the captain will be Kevin De Bruyne. The Belgian was rested during his country’s last qualifier against Belarus, so should be fit to start both upcoming games. To inject the side with a little more pace and industry, the remaining midfield slot will be taken by Bernardo Silva. Both him and Gundogan have had the same amount of game time lately, but for the reasons outlined I reckon Guardiola will elect to save Mr. Whippy and his 99s for the Champions League tie in midweek.

Up front, the well-rested South American duo of Gabriel Jesus and Sergio Agüero will start. Both forwards played together recently against Fulham, where the manager went with a wing-back formation to accommodate starting the pair of them. Here, I think Guardiola is likely to play Jesus on the left and Agüero centrally. If more width needs to be created on that side, we could see Bernardo, De Bruyne, or Cancelo drifting out that way.

Alternatively, the positions on the front line could be alternated with Phil Foden. The Stockport native is my pick to start wide right, combining with Cancelo and De Bruyne to get around the defence, but he can also be utilised to cut inside or switch to the left when necessary.

FIVE England stars could have decisions to make over their futures following their Euro 2020 final heartbreak at Wembley. Gareth Southgate's squad are set to take a well-deserved summer break following their exploits in the penalty defeat to Italy last night. During the tournament, Three Lions captain Harry Kane had...

Manchester City At The Euros - Heartbreak For the City Boys

Manchester City’s England quartet suffered Euro heartbreak as the Three Lions lost the final on penalties. Kyle Walker, Raheem Sterling and John Stones all started Sunday’s match, but Phil Foden was ruled out with a foot injury as England once again succumbed to the curse of a penalty shoot-out. It...

Motherwell have signed central defender Darragh O'Connor on a one-year deal. The 21-year-old Irishman arrives at Fir Park as a free agent after leaving Leicester City. He spent two years with the English Premier League side's under-23 squad, having moved from Wexford. "We really like what we've seen with his...

Juventus have long admired Manchester City’s Gabriel Jesus and could finally make a move for the striker this summer. According to Tuttosport, the Brazilian international is their first-choice target, ahead of Moise Kean, Mauro Icardi, Dusan Vlahovic, Arkadiusz Milik and Andrea Belotti. After finishing fourth in Serie A, bringing their...

It is becoming more and more likely that Denmark and Sampdoria winger Mikkel Damsgaard will be a Premier League player next season. The 21-year-old has been hailed as a bright prospect since his senior debut for Nordsjaelland at the age of 17, and after a solid debut season in Serie A with Sampdoria last campaign, it was his barnstorming performance at Euro 2020 this summer that has propelled him into the limelight.

Leicester City injuries: When to expect Timothy Castagne to be fit

Leicester City and Belgium defender Timothy Castagne sustained a horror injury at Euro2020. Yet Foxes fans can hope he is to be fit sooner rather than later. The Euros have been a good watch for Foxes supporter for the most part, as the participation in the competition has been more than ever. There have been some pretty exciting moments in the tournament for Leicester fans and some rough ones too. Kasper Schmeichel leading Denmark all the way to semi-finals but losing is a big example of that.

Leicester City are set to give former Liverpool loanee Ozan Kabak a route back to the Premier League, according to reports in Turkey. Kabak joined Jurgen Klopp's side from Schalke in January and largely impressed over the course of his 13 appearances. He proved a capable deputy for the injured trio of Virgil van Dijk, Joe Gomez and Joel Matip, and played a role in Liverpool's late-season charge back into the top four.

Juventus have reportedly made Manchester City striker Gabriel Jesus their top transfer target despite Cristiano Ronaldo being tipped to remain in Turin next season. Juve are keen to add more firepower to their squad after finishing fourth in Serie A last season, 13 points behind champions Inter Milan. According to...

How do Manchester City solve their striker dilemma?

The start of the new season is fast approaching, yet Manchester City are have kept their transfer cards close to their chest. Talismanic striker Sergio Aguero departed the club for pastures new at the end of his contract, ending a 10 year, trophy laden spell in East Manchester. The Argentine's...

With the squad set to return to first-team training next week, Pep Guardiola's said are already beginning to put together their starting plans for the defence of their Premier League crown for the third time since the Catalan's arrival in 2016. However, the summer tournaments in the European Championships and...

The Sky Blues are looking to bolster their attack ahead of the new campaign, and while Tottenham forward Harry Kane is on top of their wishlist, Griezmann has been mentioned as a potential alternative to the England international. Barcelona are under immense pressure owing to the financial implications of the...