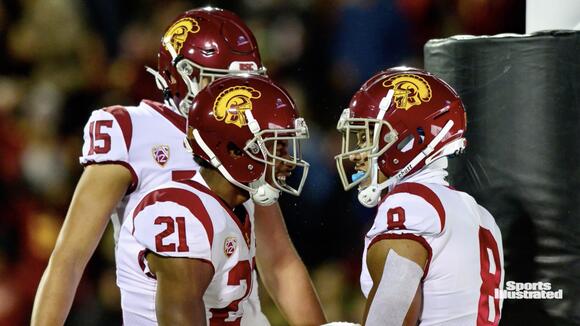 The 2021 NFL Draft is less than one month away, and prospects all around the country are gearing up for the big night.

Among this group is USC wide receiver Tyler Vaughns, who spent five seasons with the USC Trojans playing wide receiver and on special teams.

There are still a lot of questions surrounding Vaughns draft-ability. He showed great talent and skill while at USC, but does he have what it takes to play at the next level?

Sports Illustrated's NFL Draft Bible conducted a scouting report on Vaughns and detailed that he could very well have a 'decade-long career' in the NFL, and here is why.

"Teams often clamor for traits and upside early on in the NFL Draft, ignoring the floor/baseline for prospects. Other times, you have the opportunity to select players like Vaughns, who defines the saying “jack of all trades, master of none”.

The former 5-star recruit and California native has been the model of consistency throughout his time at USC. His freshman campaign he was very productive with a 57-809-5 receiving line, followed that up with a 58-674-6 line as a sophomore, then last season caught 74 passes for 912 yards and six scores as USC’s third receiver behind Michael Pittman Jr. and Amon-St. Brown.

Primarily a Z, Vaughns plays the sideline very well and displays crisp route-running and fluid movement skills. When running vertical routes his separation skills are extremely solid as well, and he has excellent awareness as well.

Despite being over six feet tall, Vaughns isn’t quite the contested-catch weapon that could be used as a red zone threat. His hands have also been a smidge inconsistent, primarily during 2019.

Regardless, even in a loaded 2021 wide receiver class, Vaughns has all of the makings of a mid-round, possibly Day Two pick, with his game-to-game consistency and translatable traits. He could easily have a decade-long career as an NFL team’s WR3."

Now only time will tell what the future holds for this former USC Trojan.

Coaches Poll Top 25: USC Trojans move up to No. 6 in college football rankings

USC escaped Corvallis with a scrappy 17-14 victory over Oregon State on Saturday night. On Sunday morning, they rose in the college football rankings. The Trojans are ranked No. 6 in the newest Coaches Poll, which is voted on by 66 Football Bowl Subdivision coaches. That's one spot higher than last ...
LOS ANGELES, CA・1 DAY AGO
Bring Me The Sports

Report: Hurricane Ian could push Bucs vs Chiefs to Minneapolis

Tackett Curtis is the real deal. The four-star linebacker and USC commit led Many High School (Louisiana) to a 25-17 upset of Isidore Newman and five-star quarterback Arch Manning on Friday night.  Not only did Curtis delivers huge hits from his linebacker position - he also took almost every ...
LOS ANGELES, CA・2 DAYS AGO
AllTrojans

Coming off a last-minute 17-14 victory over Oregon State, where USC's offense struggled for the first time this season, it would have been safe to assume the oddsmakers might be more cautious with the Trojans going forward. Think again. The Trojans opened as 26-point favorites for their home game ...
LOS ANGELES, CA・2 HOURS AGO

From Drake London to Drake Jackson, former USC football players are showing out through the first three weeks of the 2022 NFL season. Here's a look at how former Trojans are faring this season in the pros: (The list is in alphabetical order) NELSON AGHOLOR, PATRIOTS WR Agholor, in his eighth NFL ...
LOS ANGELES, CA・5 HOURS AGO
AllTrojans

California is loaded with high school football talent, and on any given Friday night you can watch dozens of future college football players - including future USC Trojans Malachi Nelson, Makai Lemon, Christian Pierce and more. Week 5 of the 2022 CIF high school football season is underway across ...
HIGH SCHOOL・2 DAYS AGO
AllTrojans

Through the first four games of the Lincoln Riley era, this much is clear: the No. 6 USC Trojans will not beat themselves. After seven years of mostly inconsistent, mistake-filled football under Clay Helton, Riley has quickly put his stamp on the program. USC has shown an explosive offense, yes. ...
LOS ANGELES, CA・1 DAY AGO
HBCU Legends

Jackson State ranks in the Top 10 of the FCS Coaches and Stats Perform Polls in Week 5.
JACKSON, MS・2 HOURS AGO