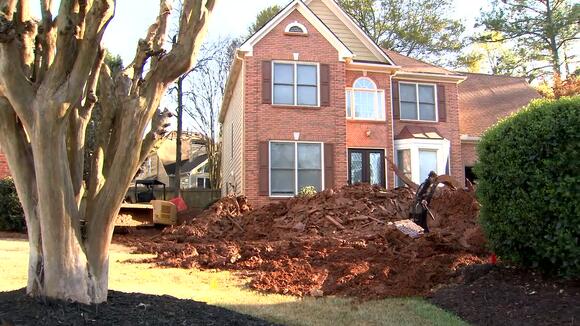 Michael and Connie Lam bought their home in Roswell a few years ago and recently noticed some issues with the lawn.

“Some settling, and we realized it wasn’t getting better, it just kept getting worse,” Michael Lam told Channel 2′s Mike Petchenik.

When the Lam’s hired a landscaper to inspect the property for them, they got some bad news.

“They have a trash hole that runs from their backyard to their front yard full of construction debris,” said landscaper, Michael Coyne.

Coyne said up until the mid-1990s it was legal in Georgia for developers to bury their debris beneath homes instead of taking it to the landfill.

“All the trash will start to decompose and settle,” he said. “If you try to fill it in without digging the trash, you’re just putting more weight on top of the debris and it sinks.”

The deeper the crews have gotten the more debris they’ve found, including what appears to be the remnants of a construction trailer.

Coyne advised people who purchase homes built during that time period to thoroughly inspect the land around it for any suspicious depressions.

“Our son’s playroom is right on that corner,” said Connie Lam. “and we’re about to welcome a new one an August. I mean, of course for any parent, you want to have a stable home.”

Even though lawmakers outlawed the practice, they’ve yet to address who is responsible for the damage when the debris decomposes 10 to 20 years after the fact, so the Lams are looking to pay nearly $60,000 for the work. Their homeowner’s insurance policy won’t cover it.

“It seems like nobody’s gonna take accountability for it, but you’re ultimately responsible as the homeowner. So things need to change in the law,” Michael Lam said.

The original builder of the neighborhood, Torrey Homes, sold to D.R. Horton in 1997.

Petchenik reached out to D.R. Horton to see if the company would step in to assist the Lam family.

“We do not believe we have previously been made aware of this,” a spokeswoman told Petchenik in an e-mail. She asked Petchenik to connect her to the Lam family so they could contact them directly.

“It’s an issue that a lot of normal people can’t afford to fix,” Connie Lam said. “But you have to fix it because it’s for the safety of your home and your family.”

The family has started a GoFundMe page to help with expenses.

Disgusting that these construction companies got away with this. When all they had to do was haul trash to the dump. Do the idiots not comprehend DUMP/LANDFILL They should be held accountable.

I think if we can pay reparations to people for the actions that were legal 200 years ago, theses folks should be able to sue the developer from the 1980s for the results of what was legal then!

It’s amazing how people have no shame in asking other people to pay for their problems. How about a go fund me dor the homeless/veterans.

ATLANTA — Thousands of Georgia families will get new help with childcare through an expansion of the state’s Childcare and Parent Services program. [DOWNLOAD: Free WSB-TV News app for alerts as news breaks]. Gov. Brian Kemp announced Monday that the CAPS program, which helps families with the cost of childcare,...
GEORGIA STATE・57 MINUTES AGO
WSB Channel 2 Atlanta

CARROLLTON, Ga. — Family members are desperate to find a former Navy man who left his home in Carrollton early Saturday morning and hasn’t been seen since. Mascerlin Ellison, 23, left his home around 4:30 a.m. driving a grey Honda Accord. Ellison was discharged from the Navy in March after...
CARROLLTON, GA・2 HOURS AGO