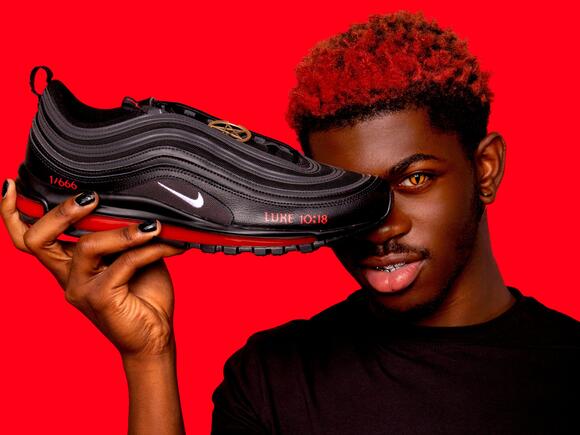 Lil Nas X broke the internet on Friday after his video for " Montero (Call Me By Your Name) " dropped, using what some see as religious imagery to describe a queer angel's fall from heaven .

The star made waves again just days later after MSCHF announced a collaboration with the rapper for his "Satan Shoes," which each contain a drop of human blood.

Culture and streetwear publication SAINT tweeted pictures and details about the shoes on March 26, saying each of the individually numbered 666 pairs of modified Nike Air Max '97s sold will "contain 60cc ink and 1 drop of human blood."

Lil Nas X himself retweeted the promotion much to the surprise of fans. The collaboration received a mixed bag of emotions from fans and followers, with the Church of Satan even asking for a pair.

Many fans were shocked by the controversial decision to include human blood in the shoe, some saying they will boycott Lil Nas X over the decision . Most comments online simply expressed confusion over who or what's blood will be in the shoe.

"Wait - serious question.. who's blood is it and what is the significance or symbolism of the blood? Please help me and others understand!" one person tweeted.

MSCHF, the company Insider's Paige Leskin previously reported is behind some of the internet's most controversial novelty products , confirmed the shoes will include real drops of human blood from six members of the company's team.

The controversy even elicited a response from South Dakota Governor Kristi Noem , who tweeted "our kids are being told that this kind of product is, not only okay, it's 'exclusive.' But do you know what's more exclusive? Their God-given eternal soul."

Lil Nas X fired back by tweeting "ur a whole governor and u on here tweeting about some damn shoes. do ur job!"

After the controversy began trending on Twitter over the weekend, Lil Nas X posted a video of himself on YouTube titled " Lil Nas X Apologizes for Satan Shoe " on March 28.

"I see everybody's been talking about this shoe, and I just want to come forward and say," Lil Nas X said before the scene cuts to his singing "f--- it, let's ride" while giving Satan a lap dance in his "Montero" video.

Nike released a statement clarifying the collaboration has nothing to do with the brand.

"We do not have a relationship with Little Nas X or MSCHF," Nike said in a statement. "Nike did not design or release these shoes and we do not endorse them."

The public will be able to purchase a pair beginning March 29.

no clue who he is but clearly he's a pathetic moron. can't say anything about God but let's worship the devil! garbage! so many reasons to never buy nike

He already know he going to hell. So he gone promote any agenda as possible. He want his heaven on earth.

'Rattled & Red-Faced': Prince Harry Upset With His & Meghan Markle's Slip In Status After Being Shunned By Hollywood's Elite

Panicked Prince Harry's dream move to America with wife Meghan Markle has become a real-life nightmare — because he went from being the toast of England to the bottom of the Hollywood social circuit, RadarOnline.com has learned. "Harry was so excited to move to California and assume he'd be...
CALIFORNIA STATE・21 DAYS AGO
Insider

Nick Cannon hospitalized with pneumonia a day after his sold-out Madison Square Garden show: 'Life is definitely a rollercoaster'

Nick Cannon told fans he isn't "superman" and shared a selfie from his hospital bed after contracting pneumonia. The comedian also has lupus.
NEW YORK CITY, NY・1 DAY AGO
Insider

"It was inappropriate to have kids promote objects that had nothing to do with them," designer Demna Gvasalia said in an Instagram post.
1 DAY AGO
Insider

The Liver King, an influencer who eats raw meat and preaches a primal lifestyle, admits to lying about steroid use

Brian "The Liver King" Johnson made the admission after leaked emails showed his steroid usage cost him up to $11,000 per month.
1 DAY AGO
Insider

Zendaya's mom, Claire Stoermer, appeared to react to recent rumors about the "Spider-Man" costars on her Instagram Story.
2 DAYS AGO
Insider

"When the stakes are this high, doesn't it make more sense to hear our story from us?" Meghan Markle asks in the trailer, released on Thursday.
2 DAYS AGO
Insider

A producer from Will Smith's new movie 'Emancipation' brought a photograph of an enslaved man to the premiere, sparking a backlash

Destroying your Balenciaga bag on TikTok is futile — the viral protest method may gain TikTokers followers, but it isn't changing how brands behave

The Balenciaga ad controversy has customers and influencers destroying their designer clothing on social media. But is it really helping their cause?
22 HOURS AGO
Insider

"Emily in Paris" is returning to Netflix on December 21. Emily Cooper has on-trend French girl bangs this season.
1 DAY AGO
Insider

5 Disney songs inspired me to become a world traveler. I've now been to 79 countries on all 7 continents.

Insider's writer was inspired by Disney songs from "Aladdin," "The Little Mermaid," "The Lion King," and others to become a full-time traveler.
HAWAII STATE・1 DAY AGO
Insider

WHERE ARE THEY NOW: All the 'Project Runway' winners

"Project Runway" has delivered many talented designers including Christian Siriano. Here's what the winners of the past 18 seasons are up to now.
2 DAYS AGO
Insider

From fleece-lined styles to classic trucker cuts, these are the best denim jackets for men, according to our style experts.
OREGON STATE・1 DAY AGO
Insider

A Hollywood townhouse where Marilyn Monroe is said to have lived is on the market for $899,000. A former tenant says it's as if the building is made of 'fairy dust.'

A two-bedroom townhouse in Los Angeles that Marilyn Monroe is said to have called home while working as an actress in Hollywood is on the market.
LOS ANGELES, CA・1 DAY AGO