Misbah defends selection of Sharjeel Khan for T20s in Africa 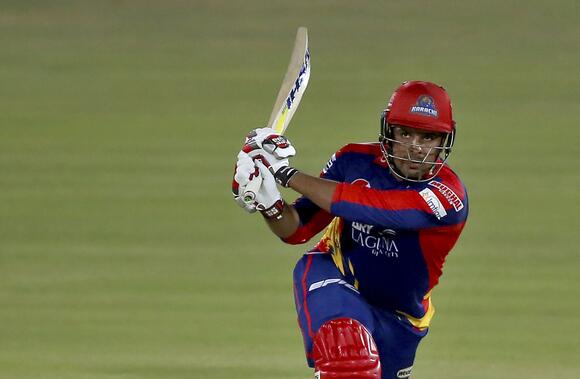 ISLAMABAD (AP) — Pakistan head coach Misbah-ul-Haq defended the selection of Sharjeel Khan for next month’s Twenty20 internationals against South Africa and Zimbabwe despite questions about the lefthanded opening batsman’s fitness.

Khan returns to the national team after more than four years away. He had been banned for his involvement in a Pakistan Super League spot-fixing scandal in 2017. His initial five-year ban was reduced by half on appeal.

While recalling Khan, chief selector Mohammad Wasim had said that Khan hadn’t regained full fitness but was still selected because of his power hitting in the first six overs of Twenty20 game.

“We are not bringing the standards of fitness down,” Misbah told reporters on Thursday during a virtual press conference. “We will simplify the fitness standards by giving certain targets to players like whether they are overweight, their fat level and endurance level.”

Misbah said Khan has been given a fitness program that will produce results by the time Twenty20s begin in South Africa on April 10.

“We were in agreement that we will plan and allocate the time he (Khan) is with us,” Misbah said. “We got everyone to play domestic cricket and it was a busy and tough year all around COVID-19, but now we have time and hopefully, you will see that his fitness will get better.”

Misbah said if there are issues with Khan or any other players, they will be referred to the coaches at National High Performance Centre in Lahore.

Khan and Mohammad Amir were reintegrated to the national team after being found guilty of involvement in spot-fixing scandals. However, Salman Butt and fast bowler Mohammad Asif haven’t returned to the squad despite serving their punishments from a 2010 spot-fixing scandal in which Amir was also involved.

“There’s a law that allows players to play after serving punishment,” he said. “I don’t know why others didn’t get picked. If there was such a law that said you can’t pick a tainted player, then it would be clear, but if they can play then why not.”

A second judo fighter has quit the Tokyo Olympics rather than face an Israeli opponent. Mohamed Abdalrasool, 28, of Sudan, was a no-show for his fight against 27-year-old Tohar Butbul in the 73kg class on Monday morning. It comes after Fethi Nourine of Algeria quit the contest last week because...

Pakistan’s “poor” display in its 3-0 defeat to England’s second-string team in the one-day series was indefensible, head coach Misbah-ul-Haq said on Wednesday. The home side’s first-choice lineup had to isolate after a COVID-19 outbreak but a group of inexperienced reserves played fearless cricket under Ben Stokes’ captaincy against a team led by No. 1 ranked ODI batsman Babar Azam.

PCB has to be blamed for appointing inexperienced Misbah-ul-Haq as head coach, insists Rashid Latif

Durham [UK], July 21 (ANI): The Board of Control for Cricket in India (BCCI) on Wednesday informed that pacer Avesh Khan remains under observation after sustaining a blow to his left thumb on Day 1 of the ongoing three-day warm-up game between Indians and County Select XI. "UPDATE - Fast...

Pakistan bowler Sohail Tanvir feels he is capable of delivering as an all-rounder for the country’s cricket team, especially in the shorter formats of the game. Tanvir was part of the Multan Sultans team that won the PSL 2021 season and contributed well with both bat and ball. Sohail Tanvir...

ENG vs PAK 2021: “We lost momentum and are struggling to regain it” – Pakistan coach Misbah-ul-Haq

Pakistan head coach Misbah-ul-Haq acknowledged that his team are on a downward spiral and are struggling to regain momentum. Pakistan recently suffered a 3-0 white-wash against England in the ODIs, despite the hosts having as many as nine uncapped players in their squad. England had to change their entire squad...

Alun Wyn Jones has completed a remarkable recovery to captain the British and Irish Lions in the first Test against South Africa in Cape Town just four weeks after dislocating his shoulder.Warren Gatland’s side includes a number of surprise selections, with an attacking feel and a forward pack picked to directly combat South Africa’s World Cup-winning unit.“In my four Tours as a Lions coach, this was by far the hardest Test selection I have been involved in,” said Gatland. “We couldn’t have asked for more from the players so far; they’ve all put their hands up and made picking...

Pakistan head coach Misbah-ul-Haq defended young Azam Khan, and believes that it will be unfair to judge the 22-year-old based on just two knocks, after the right-hander failed to light up the stage against England. Misbah further admitted that Pakistan are enduring ‘same old’ middle-order problems. There was spotlight on...

BRIDGETOWN, Barbados (AP) — Jason Holder and Nicholas Pooran made half centuries in a 93-run sixth wicket partnership which steered the West Indies to a four wicket win over Australia in the re-scheduled second one-day cricket international Saturday, leveling the three-match series at 1-1. In a match in which the top orders of both teams failed, Holder and Pooran lifted the home team from 72-5 in the 15th over to 165-5 in the 36th, chasing Australia’s 187.

Proteas captain Temba Bavuma won the toss and chose to bat first in the third and final T20 International against Ireland at the Stormont Cricket Club on Saturday. South Africa lead the three-match series 2-0 after some heroic bowling by World No 1 T20 bowler Tabraiz Shamsi. However, Shamsi and...

Colombo [Sri Lanka], July 25 (ANI): Sri Lanka captain Dasun Shanaka won the toss and opted to bowl against India in the first T20I of the three-match series here at the R Premadasa Stadium on Sunday. Having won the ODI series 2-1, the Dhawan-led side under the guidance of head...

Half-centuries from Nicholas Pooran and Jason Holder guided the West Indies to a series-levelling four-wicket win the second One-Day International of the three-match series against Australia at Kensington Oval in Barbados on Saturday. Replying to the visitors' modest total of 187 all out, the home side slipped to 72 for...

CWI drop one T20I from upcoming series against Pakistan

Bridgetown [Barbados], July 26 (ANI): Cricket West Indies (CWI) and the Pakistan Cricket Board (PCB) have announced a revised match schedule for the upcoming "Osaka Presents PSO Carient T20 Cup" between the West Indies and Pakistan in the Caribbean. A four-match T20I series, has been agreed, scheduled to start on...

WI vs AUS | It is a catch-22 situation for us with Jason Mohammad, reckons Kieron Pollard

Despite West Indies’ win, Kieron Pollard reckoned that it is a catch-22 situation for the team with Jason Mohammad, who continued to slumber with scores of 11 and 2 in his last two innings. Pollard also insisted that there is a real need for improvement across the three facets of the game for them.

Four of England’s stand-in stars have been kept on for the Twenty20 series against Pakistan with limited-overs captain Eoin Morgan and eight others players returning from isolation to reclaim their places. A team of emergency call-ups completed a remarkable 3-0 sweep of the Royal London Series after being thrown together...

Australia's varied bowling attack once again dominated a suspect West Indies batting line-up on the way to a series-clinching six-wicket victory in the decisive final fixture of the three-match One-Day International series at Kensington Oval in Barbados on Monday. Opening batsman Evin Lewis played a lone hand with an unbeaten...