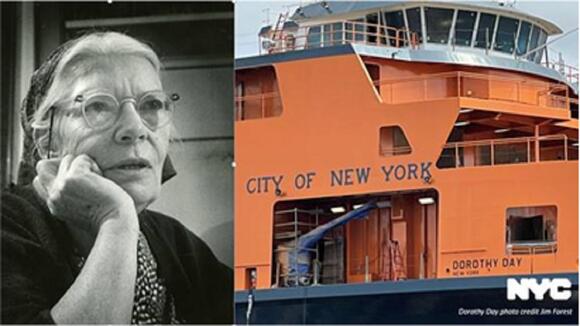 A new boat will soon be joining the Staten Island Ferry's fleet. The boat is about to start making its journey up from Florida, where it was built. On Thursday, Mayor Bill de Blasio announced the ferry will be named for Dorothy Day. Day was a longtime Staten Island resident who helped established the Catholic Worker Movement and was a pioneer on many fronts. Day was born in Brooklyn Heights in 1897. She died in 1980. The Dorothy Day will be the third Staten Island Ferry named for a woman. The first, which was decommissioned in the 1970s, was named for Revolutionary War hero Mary Murray. The second, which still operates overnight, is named for Staten Island photographer Alice Austen. TRENDING | Bronx intersection renamed after late hip-hop icon Big Pun

Darla Miles reports on Big Pun Plaza in the Bronx.

In an Eyewitness News Special: Seeking Asylum in New York City, we take a closer look at the increasing number of asylum seekers, the massive challenge to find shelter for everyone, the greatest needs they face right now and how you can help.
NEW YORK CITY, NY・3 HOURS AGO
ABCNY

Due to coverage of the MLB playoffs on Channel 7, Eyewitness News at 4:00 p.m. will stream here and on our connected TV apps for Fire, Roku, Android and Apple.
NEW YORK CITY, NY・1 HOUR AGO
ABCNY

On Friday, New York Mayor Eric Adams declared a state of emergency and announced an executive order to suspend land use requirements to help the city cope with the influx of people.
NEW YORK CITY, NY・1 HOUR AGO
ABCNY

Amid the coronavirus pandemic, the 2020 event was held virtually, while in 2021, organizers held a scaled down event with fewer participants.
MANHATTAN, NY・23 HOURS AGO
ABCNY

Columbus Day Parade 2022 in NYC: How to watch live

Peter Zisopoulos pleaded not guilty and will undergo an evaluation, on the request of his attorney, to determine if he is fit to stand trial.
QUEENS, NY・23 HOURS AGO
ABCNY

A victim in the Bronx collapsed on the platform and died, becoming the seventh person to be killed in the NYC transit system this year, and the second fatal subway stabbing in less than a week.
NEW YORK CITY, NY・2 HOURS AGO

The humanitarian relief center for asylum seekers originally planned for Orchard Beach is being relocated to Randall's Island in response to backlash and flooding concerns.
NEW YORK CITY, NY・2 DAYS AGO
ABCNY

A daredevil and award-winning cinematographer provided answers to a sky-high spectacle that was captured on camera at a high-rise building in Lower Manhattan.
NEW YORK CITY, NY・1 DAY AGO
ABCNY

Police say one passenger pepper-sprayed the other, which resulted in people trying to flee the train and the station.
NEW YORK CITY, NY・5 HOURS AGO
ABCNY

There was a victory this week for restaurants and the city in the ongoing controversy over sidewalk dining in New York City.
NEW YORK CITY, NY・1 DAY AGO

New York City Council members were not so hot on Mayor Eric Adam's new idea to house asylum seekers in a tent city at Randall's Island, so they presented some solutions of their own Wednesday night.
NEW YORK CITY, NY・1 DAY AGO
ABCNY

One worker estimated that as many as 100 employees walked out on the job after a fire at a Staten Island warehouse.
STATEN ISLAND, NY・1 DAY AGO
ABCNY

Police search for suspects in string of burglaries in Brooklyn, Queens

In all, police say they've gotten away with more than $43,000 in cash, and tens of thousands more in stolen items. They even took one victim's dog.
BROOKLYN, NY・23 HOURS AGO
ABCNY

NYC shootings and murders down, other crime up in September

Overall transit crime was up in September by nearly 4%. Transit assaults were up even more, by 16.8% year over year
NEW YORK CITY, NY・5 HOURS AGO

Not only has hailing a cab in New York City gotten more difficult, it could soon get more expensive.
NEW YORK CITY, NY・22 HOURS AGO
ABCNY

In this edition of 'The Countdown,' we begin with the final salute to FDNY EMS Lt. Alison Russo-Elling who was brutally murdered in the line of duty.
NEW YORK CITY, NY・1 DAY AGO
ABCNY

The lieutenant's wake was held Monday and will continue on Tuesday from 2 to 4 p.m. and 7 to 9 p.m.at Commack Abbey Funeral Home in Commack, New York.
COMMACK, NY・3 DAYS AGO
ABCNY

A man is fed up over a broken pipe that has repeatedly released hot steam into his apartment in Queens since Saturday.
QUEENS, NY・2 DAYS AGO