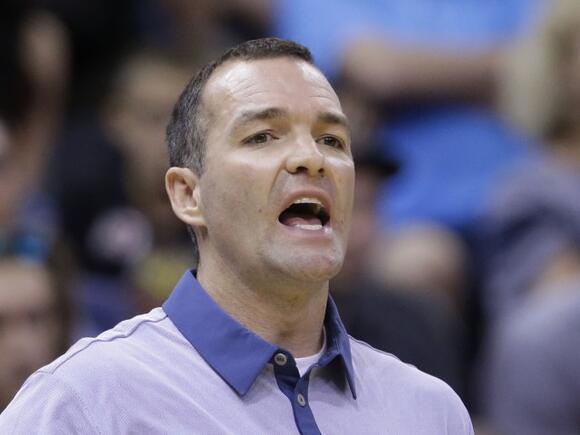 The apparent front-runner for the University of Utah's vacant head basketball coach position has pulled himself out of the running, according to a report.

ESPN tweeted Thursday that Utah Jazz assistant coach is no longer interested in returning to his alma mater. The network's Adrian Wojnarowksi is reporting New York Knicks assistant coach Johnnie Bryant, who also played for Utah, remains a "significant candidate" for the job.

Multiple reports linked Jensen to the Utes job after Larry Krystkowiak was fired on March. 16. Jensen was reportedly set to interview with Utah Athletic Director Mark Harlan this week.

Jensen played for Utah under Rick Majerus and was part of the 1997-98 team that went to the National Championship game. After his playing days, Jensen coached under Majerus at St. Louis.

Jensen jumped to the NBA in 2013 when he took an assistant coaching position with the Jazz.

With less than two weeks before NBA All-Star Weekend tips off in Utah, there's no lack of excitement for the return of the massive event to Salt Lake City.
SALT LAKE CITY, UT・2 DAYS AGO
prosportsextra.com

I’ll never enjoy covering these stories but whenever someone sadly passes away we need to make sure it’s covered. If you’re a fan of USC or the Los Angeles Rams this persons death might hurt you more than on average. Former Cleveland Browns first round pick, Charles,...
LOS ANGELES, CA・2 DAYS AGO
All Seahawks

“You got a $200 million contract, and you want people in the NBA to think you hood, to think you gangster” - Shannon Sharpe calls out Ja Morant over alleged gun incident

Sharpe believes something has to change for Morant, otherwise the Grizzlies star is putting himself in harm's way.
MEMPHIS, TN・1 DAY AGO
BasketballNetwork.net

Stephen A. lets us in on a private conversation between him and Isiah Thomas about Steph Curry.
1 DAY AGO
FOX 13 News

Colorado State fans are under fire for their behavior at Saturday night’s basketball game when their fan section repeatedly chanted “Russia” at Max Shulga, a Utah State player who is from Ukraine.
LOGAN, UT・2 DAYS AGO