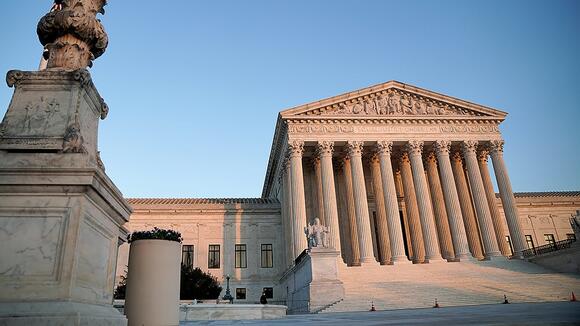 The Supreme Court on Thursday cleared the way for a police shooting victim to pursue an excessive force lawsuit against two New Mexico police officers who shot her twice as she fled by car.

In a 5-3 decision, the court issued a narrow ruling in favor of Roxanne Torres, finding that her shooting amounted to a police "seizure" under the Fourth Amendment, even though Torres had managed to evade immediate arrest.

The ruling returns the case to a lower court, where Torres must clear a number of additional legal hurdles to ultimately prevail in her claim that the officers used excessive force during the 2014 incident in the parking lot of an Albuquerque apartment complex.

Roberts, writing for the majority, emphasized that the decision was narrow in scope, with the court finding only that “the officers seized Torres for the instant that the bullets struck her.”

“We hold that the application of physical force to the body of a person with intent to restrain," he wrote, "is a seizure even if the person does not submit and is not subdued."

On the morning of July 15, 2014, New Mexico State Police officers Janice Madrid and Richard Williamson went to an Albuquerque apartment complex to execute an arrest warrant on a third party. When they arrived, they found Torres in a parked vehicle and attempted to make contact with her.

Torres was high on methamphetamines at the time and believed the officers to be car-jackers. She drove toward them, prompting them to fire at her 13 times, striking her twice, while she continued to flee. Torres was not arrested until the following day.

She later sued the officers for excessive force, arising from their alleged violation of her Fourth Amendment right against unreasonable seizure.

A federal judge in New Mexico dismissed Torres’s suit in 2018, finding that she had not been subject to a police seizure. The U.S. Court of Appeals for the Tenth Circuit affirmed the ruling.

The justices’ decision on Thursday reverses the lower court and clears the way for Torres to pursue her claims against Madrid and Williamson. To win, she will have to prove that her seizure was unreasonable and that the officers should not be entitled to immunity from her lawsuit.

Writing in dissent, Justice Neil Gorsuch said the majority had erred in finding that Torres was seized.

“The majority holds that a criminal suspect can be simultaneously seized and roaming at large,” wrote Gorsuch, joined by Justices Samuel Alito and Clarence Thomas . “It’s a seizure even if the suspect refuses to stop, evades capture, and rides off into the sunset never to be seen again. That view is as mistaken as it is novel.”

OXFORD TOWNSHIP, Mich. (AP) — A 15-year-old sophomore opened fire at his Michigan high school on Tuesday, killing three students and wounding eight other people, including at least one teacher, authorities said. Oakland County Undersheriff Mike McCabe said at a news conference that investigators were still trying to determine a...
MICHIGAN STATE・3 HOURS AGO
The Hill

A pair of rulings by separate federal judges Tuesday temporarily halted parts of the Biden administration’s mandatory COVID-19 vaccine policy for certain workers. One ruling, issued by a Louisiana-based federal judge, effectively blocked a vaccine mandate for health workers across the country at hospitals that receive federal funding. A second...
CONGRESS & COURTS・5 HOURS AGO
CBS News

It was an emotional day at the sex-trafficking trial of British socialite Ghislaine Maxwell as one of disgraced financier Jeffrey Epstein's alleged victims testified against Maxwell. Taking the stand as "Jane" to protect her identity, the first victim to testify in Maxwell's trial said she was 14 and frozen in...
PUBLIC SAFETY・2 HOURS AGO
The Associated Press

It’s the moment conservatives have been waiting for. Oral arguments at the Supreme Court on Wednesday represent the best opportunity leaders on the right have had in decades to gut the landmark 1973 Roe v. Wade decision, which codified a woman’s constitutional right to an abortion before a fetus can survive outside the womb.
CONGRESS & COURTS・5 HOURS AGO

A defense attorney for Kim Potter says the former Brooklyn Center police officer will testify in her manslaughter trial over the killing of Daunte Wright. While questioning a prospective juror, defense attorney Paul Engh said Potter will take the stand, CBS Minnesota reports. The development came as lawyers and a...
BROOKLYN CENTER, MN・10 HOURS AGO
NBC News

The Biden administration is considering tightening requirements for international travel amid growing concerns about the omicron variant of the coronavirus, a White House official told NBC News on Tuesday. The official said the administration is continuing "to evaluate the appropriate measures to protect the American people from Covid-19 and the...
POTUS・3 HOURS AGO
NBC News

When Jeremy Kamil got his first look at B.1.1.529, the coronavirus variant that would soon be named omicron, it didn’t take long to see the differences. More than 30 mutations made the variant's spike proteins, which cover the outside of the virus and are the main targets of vaccines and the body’s immune responses, different from those of the virus that first emerged in late 2019.
SCIENCE・5 HOURS AGO
The Associated Press

WASHINGTON (AP) — The losing side is likely to head straight to the Supreme Court, whatever decision the U.S. Court of Appeals for the District of Columbia Circuit reaches on whether Congress should receive former President Donald Trump’s call logs, drafts of speeches and other documents related to the Jan. 6 insurrection at the U.S. Capitol.
WASHINGTON, DC・6 HOURS AGO

WASHINGTON (AP) — A panel of U.S. health advisers on Tuesday narrowly backed a closely watched COVID-19 pill from Merck, setting the stage for a likely authorization of the first drug that Americans could take at home to treat the coronavirus. The Food and Drug Administration panel voted 13-10 that...
PHARMACEUTICALS・6 HOURS AGO
ABC News