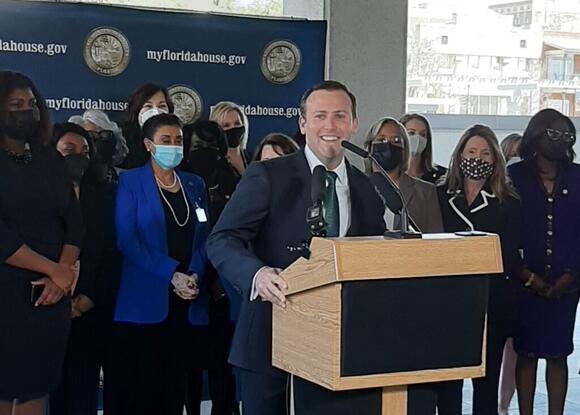 Chris Sprowls, the top GOP lawmaker in the Florida House, is following an initiative from the Democratic Biden administration to extend Medicaid coverage for a full year to low-income women after they deliver their babies.

But the House Speaker, a Republican representing part of Pinellas County, announced a plan to tackle inequities in maternal health care by pushing for the one-year expansion for maternal Medicaid benefits.

“Today the Florida House is making a meaningful commitment to address the disparities in health outcomes for our children and for their moms,” Sprowls said during a press conference at the state Capitol.

“We believe that providing access to post-natal coverage for up to one year after birth can significantly boost health outcomes for moms and their babies. And we know that healthy moms are better positioned to raise healthy and thriving children.”

Currently, the Medicaid program requires states to cover health care services for pregnant women through 60 days only during the postpartum period, according to the Kaiser Family Foundation .

Under the Biden administration’s American Rescue Plan, states now have the option to offer postpartum coverage under Medicaid for a year following a baby’s delivery.

In an analysis by the KFF, the new policy on maternal health care offers an incentive for states to expand the Medicaid program, which provides access to health coverage for low-income residents.

Florida is one of those states that has yet to expand Medicaid, which could save the lives of Floridians needing critical care amid the COVID-19 pandemic.

“This is a big step in the right direction for low-income, hardworking Floridians,” Scott Darius, executive director of Florida Voices for Health, said in an interview with the Florida Phoenix.

“Still, it would clearly be better for women and cheaper for Florida if we pursued a full Medicaid expansion where women would be covered before, during and after pregnancy. Nonetheless, we’re thankful to leaders on both sides of the aisle for their support on this issue.”

The extension for low-income women will likely go “through the budget process” to become law in Florida, according to Darius.

It’s unclear if Florida Senate President Wilton Simpson will lend his support. Katherine Betta, spokeswoman for the Florida Senate, said in an email to the Phoenix that both chambers will be discussing “budget priorities” this week.

“However, it is still very early in the process and the senators will be discussing this and other issues as the budget and associated bills move to the full committee and the (Senate) floor,” she said.

“Ultimately, differences between the Senate and House budgets are resolved during the conference process. The President has tremendous respect for the Speaker and always gives great consideration to any proposal he puts forward.”

For instance, the federal poverty level in 2021 for a family of four is $26,500, according to the federal Department of Health and Human Services.

However, “the problem is that low-income women aren’t eligible for coverage until they become pregnant,” Darius added.

“Medicaid expansion would mean that more women wouldn’t have to wait until they were pregnant to start receiving regular care, which significantly increases the odds of a healthy pregnancy,” Darius said.

“That this is a huge step, and we are really appreciative, but there is so much more we can do if we value that group of people (pregnant women).”

Quality Journalism for Critical Times WASHINGTON — The Biden administration on Thursday extended a national moratorium on evictions for another month, offering what federal officials say will be a final respite while they scramble to beef up other help for renters that could mitigate a wave of evictions once the legal protection does expire. The added month of eviction relief comes […] The post Biden administration extends federal eviction moratorium for one final month appeared first on Florida Phoenix.

Quality Journalism for Critical Times First Lady Jill Biden is scheduled to visit COVID-19 vaccine sites in the Orlando area and Tampa on Thursday, part of a nationwide tour to reach Americans who haven’t been vaccinated yet. She’s expected to visit a drive-through vaccine site at Osceola Community Health Services in Kissimmee, and later attend a vaccination event in Tampa, […] The post With COVID-19 vaccine goal faltering, White House, other groups, redouble efforts to vaccinate Americans appeared first on Florida Phoenix.

President Joe Biden and Vice President Kamala Harris will meet with a bipartisan group of Senate negotiators late Thursday morning to discuss a potential infrastructure agreement and whether a deal is within reach after weeks of negotiations on a top administration agenda item. The high-stakes Oval Office meeting comes a...

The House Appropriations subcommittee for financial services advanced a fiscal year 2022 spending bill Thursday that excludes a policy that has been in place for 45 years that blocks federal funds from being used to pay for abortions in most cases, a measure President Joe Biden pledged during his campaign he would overturn.

'We have a deal': Biden reaches $1.2 trillion infrastructure compromise with bipartisan group of senators

SIOUX FALLS, S.D. (AP) — A campaign group backed by South Dakota's major health care systems announced Wednesday that it will begin gathering petition signatures for a ballot measure to expand Medicaid to provide health coverage for low-income people. Medicaid expansion is shaping up to be a major question facing...

The Biden administration is quietly engineering a series of expansions to Medicaid that may bolster protections for millions of low-income Americans and bring more people into the program. Biden's efforts — which have been largely overshadowed by other economic and health initiatives — represent an abrupt reversal of the Trump...

Pressure is building on Biden to address the law's underlying problems now that it has survived the latest Supreme Court challenge.

President Joe Biden highlighted the importance of getting vaccinated against Covid-19 and kicked off a community canvassing event during a speech in Raleigh, North Carolina, on Thursday afternoon, as his administration has continued its push to get American vaccinated against the virus.

Medicaid Enrollment Rises To Historic Mark Of 80 Million During Pandemic

Nearly 10 million new people enrolled in Medicaid or the Children's Health Insurance Program from February 2020 to January 2021. More than 80 million people—a record number—have health coverage through Medicaid and the Children’s Health Insurance Program, as enrollments surged due to Covid-19, according to new data released Monday by the Centers for Medicare and Medicaid Services. Between February of 2020 and January 2021, nearly 9.9 million people enrolled in the two programs—a 13.9% increase, the data shows. And more than 38.3 million children, or nearly half of the total Medicaid and CHIP enrollment, were in both those programs. (Parti, 6/21)

The assumption among most politicians — and bettors — is that Republicans will win control of the House next year, perhaps the Senate too. It's reflected in the Democrats’ rushing to get anything done in this Congress, worried it's the last chance, and pressuring Supreme Court Justice Stephen Breyer to step down so they can tap a replacement. Republicans mainly want to thwart Joe Biden and not antagonize Donald Trump . Most even opposed a bi-partisan commission to investigate the Trump-inspired Jan. 6 mob assault on the Capitol.

(CNN) — A record 80.5 million Americans have health coverage through Medicaid or the Children's Health Insurance Program, largely because states have had to keep people enrolled during the coronavirus pandemic, according to new federal data released Monday. Between February 2020 and this past January, enrollment in Medicaid jumped by...

More than 70% of Virginians have received at least one dose of a COVID-19 vaccine as of Monday, which brought the commonwealth to President Joe Biden’s goal for the Fourth of July, Gov. Ralph Northam announced. “Virginia has reached a significant milestone in the fight against COVID-19,” Northam said in...

For most of the country, it was obvious years ago that Medicaid expansion through the Affordable Care Act is a good deal, but as regular readers know, there are still 12 holdouts. As a consequence, there are millions of low-income Americans who don't have health security, simply because Republicans in their respective states refuse to do the right thing.

WASHINGTON (AP) — The White House sought Monday to raise awareness of the federal government’s new expanded child tax credit, which will start paying out monthly in July to families with children who are 17 years old and younger. Vice President Kamala Harris spoke at a recreation center in Pittsburgh...

Quality Journalism for Critical Times From Alabama to Nebraska, state employees were off Friday for Juneteenth Day in honor of a significant event in history that ended slavery in the United States — but not Florida’s state employees. Gov. Ron DeSantis wrote a proclamation about the holiday, but didn’t grant state workers a paid holiday off to commemorate Juneteenth Day […] The post State workers across the nation had a holiday Friday for Juneteenth Day — but not in FL appeared first on Florida Phoenix.

Congress approved Juneteenth as a federal holiday, but FL Legislature failed to act on the issue

Quality Journalism for Critical Times President Joe Biden signed a new bill into law Thursday, establishing Juneteenth as a federal holiday to recognize the ending of slavery. But Florida still has not established Juneteenth as a legal state holiday, following the death of George Floyd and other issues surrounding racism and injustices against African Americans. Black state lawmakers and advocates […] The post Congress approved Juneteenth as a federal holiday, but FL Legislature failed to act on the issue appeared first on Florida Phoenix.