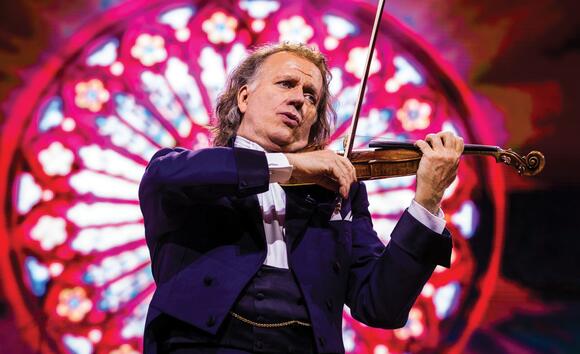 “Dear friends all over the world!” the man with the Dutch accent exclaimed on a video posted on Facebook on New Year’s Day. “2020 — what a very strange year that was.”

How very strange, indeed. It must have seemed especially so for the man speaking in the video: violinist and conductor Andre Rieu. The 71-year-old native of the Netherlands is a figure with few equivalents in the contemporary music scene. As the founder and leader of the Johann Strauss Orchestra, the conductor oversees an ensemble that, in cherry-picking the classical repertoire for works of unremitting uplift and performing them in an overripe, highly emotive manner, is gleefully unrestrained by classical music niceties.

While most orchestras encourage members to dress in conservative concert attire, Rieu, himself sporting a memorable mane of shaggy, unkempt hair, presides over an orchestra whose female members are festooned in billowy, vibrantly colored gowns that evoke Walt Disney’s Cinderella more than Live from Lincoln Center — not that the orchestra would ever play in a place as staid as Lincoln Center.

No, the Johann Strauss Orchestra has long been loosed from the confines of a single concert hall. When not performing outdoors in its signature venue, a public square in Maastricht, Netherlands, the group is on a sort of perpetual tour, zigzagging to assorted large-scale venues around the globe — anywhere, really, where light classical music played by enthusiastic, elaborately costumed musicians might be welcome.

Similar to a circus or Cher on a farewell tour, this orchestra is always on the move, or was until the pandemic hit. That is surely part of what made 2020 such a strange year for the members of the Johann Strauss Orchestra: While most classical musicians position themselves at a chilly remove from the audience, seeing themselves as dignified conduits of a composer’s intentions, Rieu and company openly engage with their adoring, voluminous, football stadium-like crowds.

When Rieu conducts a waltz, one has the impression that he is less concerned with what its composer might have wanted than in making sure that some among the assembled thousands are inspired to get up and dance. Confident that the audience is in the palm of his hands, Rieu has at times introduced rather unconventional choices into his orchestra’s repertoire, including Elvis Presley’s “Can’t Help Falling in Love,” Little Richard’s “Tutti Frutti,” and, perhaps most distressingly, the theme song to Knight Rider , with live vocal accompaniment by David Hasselhoff. Rieu himself looks and sounds like a cartoonist’s idea of a conductor — a maestro as drawn by Chuck Jones or Friz Freleng.

Full disclosure: I have never attended a Rieu-conducted concert in person, but I gained familiarity with him through broadcasts of his orchestra on public television. What says “pledge drive” more than Rieu? But even when experienced vicariously through a TV screen, the presence of an eager throng is clearly an essential component of the Rieu experience. Far more than broadcasts of traditional classical-music concerts, Rieu’s telecasts include close-ups of various spectators who always seem to be emoting — laughing, looking pensive, tearing up, and, of course, dancing — at just the right time.

In the way they cue audiences at home to react in a certain manner, these cutaway shots have something of the quality of a sitcom laugh track. One thinks of Tony Roberts’s character in Annie Hall who, in assembling a sitcom in the cutting room, calls for “a medium-size chuckle.” Of course, normal orchestras are capable of persuading audiences of their gifts without resorting to such tactics, but it’s hard to see others experiencing an emotion without feeling a bit of it yourself: If a crowd is touched by a Rieu-led rendition of Rodgers and Hammerstein’s “You’ll Never Walk Alone,” try — just try — to resist singing along. In fact, the orchestra’s concerts have something of the showmanship and desperation of the old telethons hosted by Jerry Lewis, who, of course, popularized that same R&H relic.

During the pandemic, countless artists and performing arts groups have attempted to adapt, evolve, and simply survive with Zoom performances or virtual concerts. Whatever their drawbacks, many such virtual offerings do a decent job at conveying an artist’s or group’s essential qualities: After all, lyric soprano Renee Fleming has a heart-stopping voice whether she is performing on the stage of the Met or in a living room. When one scrolls through Rieu’s YouTube channel, however, no comparable virtual performances are to be found. Instead, one encounters thumbnail after thumbnail of past glories, live concerts in Maastricht or Dresden or Vienna.

In my judgment, Rieu is smart to post the occasional video greeting, such as the one uploaded on New Year’s Day, but refrain from gathering his troops for new virtual concerts. The conductor must realize that a performance of his orchestra without fans would be a travesty. We don’t watch Rieu’s orchestra for the music, after all, but to marvel at some communal kitsch. Rieu’s website does, rather optimistically, allow viewers to buy tickets for live concerts starting in May. We shall see.

For now, we’re left with old videos of the Johann Strauss Orchestra in its pre-pandemic prime. They reveal a world seemingly far more contented than our own: Imagine people who, instead of being perpetually outraged on Twitter or dreaming up the next book, movie, or celebrity to cancel, felt the best way to spend an evening was at a concert, with the simple, uncomplicated expectation of hearing the music of Strauss, Beethoven, or even Elvis played in an entertaining, accessible manner.

When live Rieu-conducted shows return and audiences are permitted to attend both en masse and unmasked, we will not only know that the coronavirus has been beaten back but that, perhaps, the rest of our public life is returning to normal.

Peter Tonguette writes for many publications, including the Wall Street Journal , National Review , and Humanities .

Rep. Adam Schiff (D-CA) is facing an early obstacle to his 2024 Senate bid after a nonprofit ethics organization filed a complaint to the Office of Congressional Ethics accusing the California Democrat of using government resources to boost himself politically.
CALIFORNIA STATE・3 DAYS AGO
WashingtonExaminer

Russia’s defense industry has “almost doubled” its prewar ammunition production rates, according to a senior NATO member defense official who estimated that Ukrainian forces could face as many as 10,000 incoming rounds per day.
WASHINGTON STATE・3 DAYS AGO
WashingtonExaminer

Social Security update: First payments for February worth up to $4,194 arriving in 11 days

In less than two weeks, select recipients of Social Security retirement money will receive a payment of up to $4,194.
3 DAYS AGO
WashingtonExaminer

California is issuing the final wave of payments worth up to $1,050 to residents in the next two days as part of its program to offer Californians relief from rising prices due to continued high inflation.
CALIFORNIA STATE・3 DAYS AGO
WashingtonExaminer

A four-star Air Force general sent a memo to the officers he commands informing them of his belief, and the preparations expected for a U.S. war with China by 2025.
WASHINGTON STATE・2 DAYS AGO
WashingtonExaminer

The Department of Energy awarded an $80 million grant Thursday to a Georgia facility that turns wood residue into jet fuel as a way to decrease the airline industry's carbon footprint.
GEORGIA STATE・3 DAYS AGO
WashingtonExaminer

Stimulus update: Deadline to claim checks worth up to $800 in South Carolina 19 days away

There are only 19 days left for South Carolina residents to file their 2021 taxes and receive a rebate of up to $800.
SOUTH CAROLINA STATE・3 DAYS AGO
WashingtonExaminer

Notebooks used by President Joe Biden during his time as vice president were among the items taken by the FBI during a search of one of his Delaware homes last week, according to a person familiar with the investigation.
WILMINGTON, DE・2 DAYS AGO
WashingtonExaminer

In a Saturday rally in Harlem, Rev. Al Sharpton addressed the latest body camera footage release of the deadly Memphis police beating of Tyre Nichols and pledged to continue to take on any police brutality against African Americans no matter the race of the police officers.
MEMPHIS, TN・2 DAYS AGO
WashingtonExaminer

The zookeeper who was severely mauled by a black bear on anxiety medications left a door open, allowing the bear to leave its enclosure, according to new findings released by the Florida Fish and Wildlife Conservation Commission.
JACKSONVILLE, FL・3 DAYS AGO
WashingtonExaminer

Former House Speaker Nancy Pelosi (D-CA) responded to the release of police body camera footage of the attack on her husband Paul Pelosi by saying she has no plans to view it.
SAN FRANCISCO, CA・3 DAYS AGO
WashingtonExaminer

Special counsel John Durham leaned on Russian intelligence memos to access emails from an aide to George Soros, according to a report.
WASHINGTON STATE・3 DAYS AGO