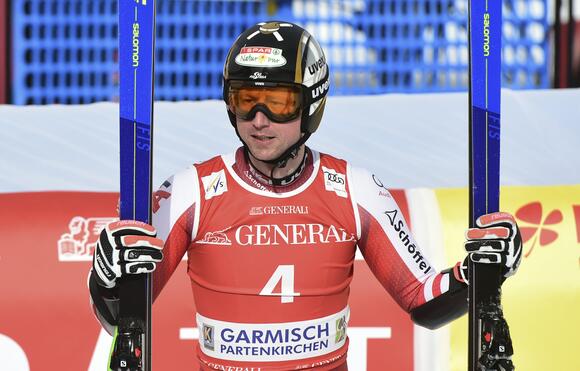 Austrian skier Hannes Reichelt kept winning races after returning from several severe knee and back injuries that hampered his career.

The former world champion’s latest setback, however, was one too many.

The 40-year-old Reichelt said Wednesday he will retire at this week’s World Cup finals in Lenzerheide, Switzerland.

The announcement came six years after the Austrian won the biggest prize of his two-decade-long career — super-G gold at the world championships in Beaver Creek, Colorado.

“I’ve got the feeling that after 20 years on the World Cup the time has come to leave,” Reichelt said.

He failed to get back to the top level after damaging his right knee in a downhill crash in December 2019 and didn’t make the Austrian team for the worlds in Cortina d’Ampezzo, Italy, last month.

“In races I was struggling more and more to get to the limit. To me it was clear: I race to the fullest or not at all,” Reichelt said.

Reichelt did not qualify for this season’s World Cup finals but was planning to ski down the super-G course on a farewell run as one of the forerunners ahead of Thursday’s race.

Reichelt has won 13 World Cup races, including the classic downhill in Kitzbühel, and had 44 podium results.

The Austrian won his home race in January 2014 while suffering from back pains. He could barely stand straight after finishing and needed surgery for a herniated disk the following day, ruling him out for the Sochi Olympics.

Another of his wins came in a super-G in 2005, only nine months after tearing an ACL.

Reichelt is also known for earning one the most unlikely discipline title wins in the 54-year history of the World Cup.

In 2008, he arrived at the finals in Bormio, Italy, trailing leader Didier Cuche by 99 points in the super-G standings. Reichelt won the race to earn 100 points, and Cuche was ultimately bumped into 16th place by his Swiss teammate Daniel Albrecht — with only the top 15 earning World Cup points.

It would be the only crystal globe award for Reichelt, who also won super-G silver at the 2011 worlds.

SAN JOSE, Calif. (AP) — A long time coming getting back to the top of the podium, Alexa Knierim and Brandon Frazier held up their shiny medals, smiled and waved once more to an audience left captivated by their sensational skating. It sure beat watching like last January when...
TENNESSEE STATE・23 HOURS AGO
The Associated Press

McIlroy leads by 3 in Dubai; Reed’s drive gets stuck in tree

DUBAI, United Arab Emirates (AP) — Rory McIlroy delivered an exhibition of short iron play to shoot 7-under 65 in his third round and build a three-stroke lead at the Dubai Desert Classic on Sunday. The top-ranked McIlroy made eight birdies at Emirates Golf Club — four in a...
13 HOURS AGO