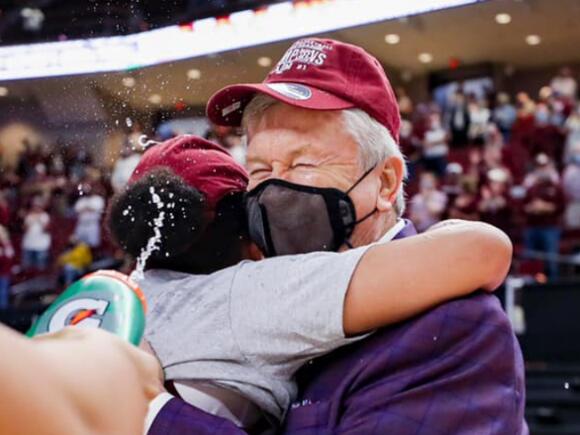 Texas A&M women’s basketball head coach, Gary Blair, has been selected as a finalist for the 2021 Werner Ladder Naismith Coach of the Year, the Atlanta Tipoff Club announced Tuesday.

An accomplished leader, Blair has brought the Aggies to a No. 2 seed in the NCAA Tournament for the fifth time in the program's history; with a first-round matchup against Troy next Monday, March 22 at 5 P.M.

In over 32 years as a collegiate level head coach, Blair has been listed in the top 35 of all-time active NCAA women's basketball coaches. In 2013, Blair was inducted into the Women's Basketball Hall of Fame. The Dallas native has also coached A&M to its first SEC regular-season championship and its highest Associated Press Top-25 finish ever at No. 4.

This is Blair's third time as a finalist (2003, 2007, 2021), and has made A&M one of only six programs in the county to have a national championship-winning coach leading them.

By visiting here , from March 19-31, fans will have the opportunity to cast a ballot daily. Also, there will be opportunities to vote via their official Twitter, right here .

The fan vote accounts for five percent of the overall vote, which will be tabulated and certified by Aprio, a premier CPA-led business advisory firm, headquartered in Atlanta.

Dak Prescott and his girlfriend Natalie Buffett flew in to Omaha on Tuesday to catch the College World Series. Buffett shared a few clips on her Instagram Story on Tuesday showing them in a private plane on the way to Omaha. She also showed herself holding up a ball that she apparently got her hands on while at the game.

The Big 12 is currently scrambling as it appears likely that both Texas and Oklahoma are leaving the conference to join the SEC. Losing both programs would be devastating to the Big 12 but it could create a great opportunity for some of the better Group of 5 schools to finally make the jump to the Power 5 level.

The race to form super conferences within college football is on. Texas and Oklahoma are headed to the SEC, so where does the Big 12 go from here? The Pac-12 isn’t just an option, but is involved in ongoing discussions among conference leaders. On thursday, conference leaders discussed “reaching out”...

The SEC is widely considered the best conference in college football, and reports have emerged today that Big 12 titans Oklahoma and Texas want in. Those reports have one SEC head coach intrigued enough to give a warning to them. Appearing on The Paul Finebaum Show, Texas A&M head coach...

Over the past few days, Oklahoma and Texas have dominated college sports headlines after reports suggested the two schools plan to leave the Big 12. A report arose, suggesting the Sooners and Longhorns reached out to the SEC about joining the conference. The two schools reportedly want to create a 16-team super-league.

Analysis: Winners and losers if Texas and Oklahoma leave the Big 12 for SEC

It's been almost 10 years since the SEC expanded to 14 teams. Who would be the winners and losers if Texas and Oklahoma left the Big 12 for SEC?

Dabo Swinney thinks the news that Oklahoma and Texas are moving to the SEC is just the beginning in what he believes will be a restructuring of major college football in the next 10 years. The Clemson head coach (...)

Mike Leach sounds off on playing at Texas A&M

Mississippi State heads to play Texas A&M at Kyle Field this season. with the Bulldogs making the trip on Oct. 2. And Mississippi State coach Mike Leach knows a thing or two about that particular road trip. “It's one of the greatest places to play on earth,” Leach said at...

Earlier this week, Oklahoma and Texas dominated headlines when it was reported that both programs planned to leave the Big 12. According to Chip Brown of 247Sports, the founding members of the Big 12 made the decision to leave the conference for the SEC. Of course, the news shocked sports fans across the country.

Jimbo Fisher warns Texas, Oklahoma about joining the SEC: 'Be careful what you ask for'

The Houston Chronicle’s Brent Zwerneman dropped a bombshell report about Texas and Oklahoma having interest in joining the SEC. Zwerneman wrote that a source indicates an “announcement could come within a couple of weeks concerning the potential addition of UT and OU to the league.” The SEC would then be set to become the first 16-team Super Conference in college football.

The Big 12, as we currently know it, is on the verge of obliteration. Texas and Oklahoma are reportedly on their way to the SEC, leaving eight members of the conference in the dust. Is there a hero to save the day? Insert the Pac-12. According to TCU insider Jeremy...

The secrecy of Texas and Oklahoma to the SEC, backstabbing of Texas A&M

There is an old adage that secrets aren’t secrets; they’re just not any of your business. Unfortunately for Texas A&M, their biggest and most hated rival that they had been avoiding since discontinuing the Lone Star Showdown, the Texas Longhorns, have possibly been having secret meetings with Greg Sankey and the rest of the conference with the intentions of joining the SEC. As reported by ESPN, Texas A&M athletic director Ross Bjork expressed the school was not involved in any conversations on the matter, hinting at the fact they were unaware.

Colin Cowherd Has A Warning For The Texas Longhorns

The future of the current college football landscape hangs in the balance as bombshell reports yesterday revealed Texas and Oklahoma are interested in leaving the Big 12 to join the SEC. As a preseason top-five team and the consensus king of the Big 12, a move to a more competitive...