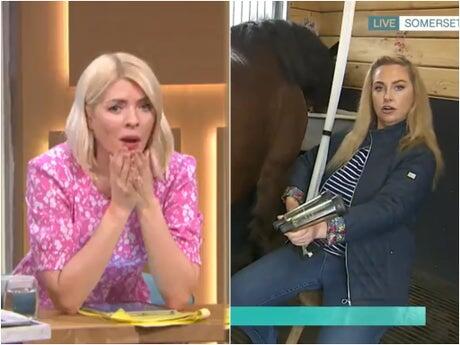 Gibson was then filmed drinking the milk, which she remarked tasted “like coconut”.

The segment was filmed at Cromwell Farm in Bath , reportedly the only farm in the UK to produce and sell mare’s milk.

The farm’s owner, referred to as Frank, expounded on the health benefits of mare’s milk to Gibson, claiming to drink a litre every day. He then instructed Gibson on how to milk the animal.

Drinking the product, Gibson described the milk as “gorgeous”, and likened it to “sweet coconut milk”.

This Morning presenters Philip Schofield and Holly Willoughby reacted in visible discomfort to the sight, with viewers at home also voicing their unease on social media.

“I will pass on the Horse Milk thanks,” wrote another.

Others were more open to the idea, with one person writing: “Why is everyone getting all squeamish about this? No different to drinking cows milk.”

Some raised concerns over animal welfare, with one person writing: “Horse milk is for foals, not humans. Humans are the only animal species that drink another species milk... It is not necessary, and it’s cruel.”

This Morning airs weekdays at 10am on ITV.

This is the incredible moment a great white shark lunges at a boat, just like in the famous Spielberg movie Jaws. The apex predator can be seen emerging from the water, mouth wide open and bearing its teeth. The footage was captured in Gansbaai, South Africa, known as the white...

This Morning's Josie Gibson has campervan keys stolen by seagull

Josie Gibson has confessed that her campervan keys have been been stolen... by a seagull. The presenter, 36, was presenting This Morning's competition segment from Westward Ho! in Devon when she revealed all about the crook gull. As she enjoyed a lick of her ice cream down by the seafront,...

Farmer and Countryfile star Adam Henson has said that people who buy almond milk and avocados instead of British meat and dairy should consider the impact their diets have on the environment.The 55-year-old presenter argued that people would be “better off” consuming dairy produced locally rather than buying nut milks that may have come from parts of the world that create deforestation through their agricultural practices.Speaking to the Radio Times, Mr Henson, who owns a 1,600-acre farm near Stow-on-the-Wold in Gloucestershire, said: “If you’re drinking soya milk, that might have come from South America and caused deforestation, the destruction of...

Mrs Hinch's beloved Flash Powermop is 35% off at Amazon - hurry!

If your house is spotless after the various lockdowns – and if you’re a fan of cleaning queen Mrs Hinch – aka Sophie Hinchliffe – then we have some exciting news. One of the Internet sensation’s top cleaning hacks – the Flash Powermop – is currently up for grabs with a 35% discount at Amazon, where it has thousands of five-star reviews. It's the lowest ever recorded price for the nifty cleaning tool on Amazon. And Sophie isn't the only star to love the brand - Ruth Langsford, Scarlett Moffat and Nadia Sawalha are also big fans.

Ruth Langsford is gracing our screens right now as she and husband Eamonn Holmes stand in for Holly Willoughby and Phillip Schofield on This Morning. We are loving the pair being back, and Ruth's wardrobe is on fire right now!. On Monday, the star kept it classic by wearing a...

These days, there’s no shortage of recipe sources, be it newspapers, blogs, cookbooks, magazines, Instagram or TikTok. Many promise simple and delicious recipes or seemingly ingenious kitchen hacks. When I see a simple recipe that promises greatness, my default reaction is scepticism. But here’s the thing: when that recipe comes from a grandmother figure, I stop and listen. Grandmothers are wise. They’re kind. They’re inherently no-nonsense.

A woman said she was "mortified" after one of her new neighbours sent her an anonymous note - revealing they could see everything when she had a shower. Sarah Yates recently renovated her first home and refitted the bathroom with new, brighter lighting. The letter was posted through her letterbox...

‘This is about the most disgusting thing I’ve seen’: People are horrified by interracial couple’s slavery-inspired wedding photoshoot

An engaged interracial couple did a pre-wedding shoot inspired by slavery. And as could be predicted, Black Twitter and TikTok had significant questions, answers, and all the memes. The shocking photos were initially posted to Instagram, though it is unclear who they belong to as the handle and other indicators...

Brazilian twin sisters, Amália and Amanda Alves, were reportedly executed because they “knew too much” about a drug deal. The entire incident was all captured on Instagram Live. According to The Sun, which cited local media, the 18-year-olds were forced to kneel on the ground before each was fatally shot....

Falynn Guobadia Claims Porsha Williams Slept With Simon Guobadia’s Cousin For A Rolls Royce Before Porsha and Simon’s Engagement; Says Their Relationship Is “For Show”

When Real Housewives of Atlanta star Porsha Williams announced that she was in a romantic relationship with Simon Guobadia, it caused quite a stir. Yes–the same Simon that had recently split from Porsha’s RHOA co-star Falynn Guobadia. In fact, Falynn was brought on the show as Porsha’s friend. And Simon is friends with Porsha’s baby daddy, […] The post Falynn Guobadia Claims Porsha Williams Slept With Simon Guobadia’s Cousin For A Rolls Royce Before Porsha and Simon’s Engagement; Says Their Relationship Is “For Show” appeared first on Reality Tea.

A superstitious Australian who found a diamond ring 14 years ago has finally handed in the trinket after being 'cursed with bad luck ever since'. The ring was posted to the Smithton Police Station in Stanley on the north-west coast of Tasmania last week. The precious piece of jewellery with...

CURLY hair model and influencer Valeria Voronina underwent such a dramatic transformation that people aren't convinced it's real. The TikToker amassed 31.2 million views on her extreme make-over video where she goes from a dowdy blotchy woman with a hook nose to an insta-glam model. While it's undeniable Valeria has...

During the summer months flies can be a real problem. They can get into your home through windows and doors, and once they're in it's quite a task to get rid of them. As well as wreaking havoc inside the house, swarms of flies can surround your wheelie bins on hot days.

A MUM was left in hysterics after reading her eight-year-old son's reply to a handwritten note their PE teacher had given them on their last day at school. She explained her son Alfie's teacher was leaving and gave him an adorable letter on his last day at school, telling Alfie just how "amazing" it had been to teach him.

Paula Stillie’s bid to find her birth parents led to more pain and questions - and a shocking twist that changes everything. The 51-year-old was adopted in Scotland but had absolutely no idea where her biological family originates from, leaving her with the feeling of something missing. Speaking on tonight’s...

An apparent cinema employee has gone viral on TikTok after revealing a major secret about the sizes of popcorn you can buy at the movie theatre.TikToker @thatcoolguy.25597 revealed that people who have purchased the medium sized popcorn may have been scammed as the small and medium actually contain the same amount of popcorn.In the viral clip, which has been viewed 6.3 million times, the TikTok user pretends to be a customer ordering the cinema snack.Then, the concessions worker shows the customer the sizes – a large bucket, a regular bucket (medium) and a junior bag (small). ...