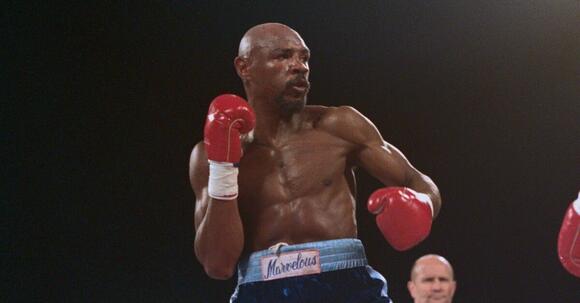 Boxing legend Marvelous Marvin Hagler, a middleweight whose 1985 defeat of Tommy Hearns capped a dominant career, has died, his wife said Saturday. He was 66.

“I am sorry to make a very sad announcement,” Hagler’s wife, Kay G. Hagler, wrote in a Facebook post on her husband’s fan club page.

“Today, unfortunately my beloved husband Marvelous Marvin, passed away unexpectedly at his home here in New Hampshire. Our family requests that you respect our privacy during this difficult time.”

Hagler, who was inducted into the International Boxing Hall of Fame in 1993. went 62-3-2 with 53 knockouts during his boxing career, which spanned from 1973 through 1987. He was the undisputed middleweight champion from 1980 to 1987 and made 12 title defenses. Hagler also was inducted into the World Boxing Hall of Fame in 1993.

The fierce-hitting left-hander won the middleweight title by knocking out Alan Minter in 1980. He went on to defeat challengers such as Vito Antuofermo, Mustafa Hamsho, Roberto Duran, Juan Roldan, John “The Beast” Mugabi, and Hearns.

Hagler’s third-round knockout victory against Hearns is regarded as one of the best fights of all-time.

The victory against Hearns in Las Vegas was one of Hagler’s two key victories in Las Vegas. He also outpointed Roberto Duran in 1983 to win a unanimous decision, also at Caesars Palace.

Hagler’s last fight was in 1987 when Sugar Ray Leonard came out of retirement and won a controversial 12-round split decision for the WBC middleweight title. Hagler retired after Leonard would not give him a rematch.

Fifty-two of Hagler’s career victories were by knockout, and he was only knocked down once in his career, Sports Illustrated reported.

Marvin Nathaniel Hagler was born May 23, 1954, in Newark, New Jersey. He moved with his family to Brockton, Massachusetts in the late 1960s, according to The Associated Press.

He legally changed his name in 1982 to Marvelous Marvin Hagler. After his boxing career ended, Hagler became an actor in Italy, Sports Illustrated reported.

RIP Marvin..... our deepest condolences to Kay and Marvins family from the Canastota Days Inn. We will miss him dearly during the BHOF Induction weekends.

Oh this makes me so sad! I remember when he won that match in the 80s. I was a little girl and my dad and his friends watched it on TV. Breaks my heart.

It’s an unfortunate mistake. Wrestlers are a unique group of people as they are TV stars who are supposed to make you believe that they are larger than life characters who are being their real selves. That is one heck of a trick to pull off, but ultimately they are still people once the cameras stop rolling. That means they are going to make mistakes, which was the case with a former wrestling star.
WWE・14 DAYS AGO
boxingnewsandviews.com

It has been a surreal few days in boxing after what can only be described as a fight for the ages in the heavyweight division. Tyson ‘Gypsy King’ Fury knocked out Deontay ‘Bronze Bomber’ Wilder in emphatic fashion last weekend in Las Vegas. Done so after getting decked a couple...
COMBAT SPORTS・9 DAYS AGO
SPORTbible

Oscar De La Hoya has reignited his rivalry with Floyd Mayweather by calling out his fellow boxing legend for a lucrative rematch. The 48-year-old boxing legend was slated to make his sensational return to the squared circle against UFC legend Vitor Belfort in September. However, De La Hoya’s comeback at...
COMBAT SPORTS・28 DAYS AGO
SPORTbible

Paris Fury has urged former WBC champion Deontay Wilder to walk away from boxing after his devastating defeat to Tyson Fury on Saturday. Wilder was unsuccessful in his bid to avenge his 2020 defeat to Fury and recapture the WBC title in Las Vegas. The 35-year-old KO artist came out...
COMBAT SPORTS・12 DAYS AGO

Mike Tyson shared an interesting insight following Deontay Wilder’s loss to Tyson Fury. After the back and forth hoopla, Fury and Wilder settled the score in their heavyweight boxing rivalry with the former ending up to be the better fighter. Both colossal heavyweights traded hard punches and scored a knockdown...
COMBAT SPORTS・8 DAYS AGO
CBS Sports

Gervonta Davis' next fight is officially set with the fast-rising star facing Rolando Romero on Dec. 5. The fight will take place at Staples Center in Los Angeles and will air on Showtime pay-per-view, the fighter announced on social media on Wednesday. Showtime has yet to confirm the bout. If it happens on Dec. 5, it will mark the third Showtime PPV to take place on a Sunday this calendar year.
COMBAT SPORTS・15 DAYS AGO
SPORTbible

Tyron Woodley was banned from knocking out Jake Paul in their boxing bout, Dillon Danis has sensationally claimed. Woodley made his professional boxing debut against the YouTuber-turned-boxer in August in Cleveland, with Paul emerging victorious via split decision in the eight-rounder. It moved him up to 4-0 in his career...
COMBAT SPORTS・3 DAYS AGO
ESPN

Tyson Fury and Deontay Wilder 3 did not disappoint in the slightest. Fury defeated Wilder by knockout to retain his WBC heavyweight title. It was a spectacular fight and one that will be considered by many as the fight of the year for 2021. The hype leading up to the...
COMBAT SPORTS・12 DAYS AGO

Deontay Wilder did not make excuses following his knockout defeat by Tyson Fury and was destabilised during the fight by a punch to his ear, according to the American’s trainer Malik Scott. Wilder suffered his second knockout defeat by Fury in a row as the ‘Gypsy King’ retained his WBC belt in an instant classic in Las Vegas earlier this month. The ‘Bronze Bomber’ showed considerable fight, however, as he recovered from an early knockdown to twice floor his British rival before Fury delivered the finishing blow in the 11th round. Wilder had made several excuses following his first loss...
COMBAT SPORTS・2 DAYS AGO
SPORTbible

Jake Paul has joked that he will throw in a first-class flight and a stay at a Best Western Hotel into Tommy Fury's fight offer after the Brit was pictured boarding a budget airliner flight this week. The YouTuber-turned-boxer made the jibe on social media after images of Fury waiting...
COMBAT SPORTS・15 DAYS AGO
The Independent

Floyd Mayweather Jr has paid tribute to Deontay Wilder’s former trainer Mark Breland, who was sacked by the heavyweight following the second fight against Tyson Fury.A former welterweight world champion and Olympic champion, Breland was made the fall guy following Fury’s seventh-round knockout win over Wilder in 2020.The Bronze Bomber was furious at Breland for throwing in the towel to end the contest, though many leaped to the support of the 58-year-old for prioritising his fighter’s wellbeing.Mayweather wrote on Instagram: “Please hit the follow button if you want to follow a humble student, teacher, mentor, and coach in the sport...
COMBAT SPORTS・4 DAYS AGO
The Independent

Savannah Marshall retained her WBO middleweight title by stopping Zambian challenger Lolita Muzeya inside two rounds in Newcastle.The Hartlepool fighter, who is unbeaten in her professional career, was making the first defence of the title she won almost exactly a year ago and it did not last long.It was a big step up in class for Muzeya and, although she came out with all guns blazing, she quickly ran out of steam and the referee stepped in just before the end of the second round.Marshall, 30, is now set for a super-fight against American Claressa Shields and the pair...
COMBAT SPORTS・6 DAYS AGO

The Opening Bell podcast on Deontay Wilder, Chris Eubank Jr and the Sky show, and a familiar debate returns. TWO issues lead the way this week. Firstly, the old favourite: Pay-per-view. Eddie Hearn recently confirmed that PPV will find its way to DAZN to provoke the questions: What constitutes PPV? Is it unavoidable in the current climate? And, more generally, what makes a good boxing show.
COMBAT SPORTS・1 DAY AGO
TMZ.com

There appears to be absolutely no more bad blood between Tyson Fury and Deontay Wilder ... 'cause the Gypsy King just sent his former rival a birthday shout-out -- and it was sweet as hell. Fury recorded his message to the Bronze Bomber on video on Friday morning ... thanking...
COMBAT SPORTS・8 HOURS AGO
Sportsnaut

Tyson Fury vs Deontay Wilder prize money: How much will fighters earn for heavyweight bout?

This Saturday night, Tyson Fury and Deontay Wilder will settle their rivalry as they fight for the WBC heavyweight title for the third time.Fury and his American foe fought to a controversial split draw in December 2018, with the Briton then beating Wilder via seventh-round stoppage in their rematch in February 2020.That victory saw Fury, 33, extend his unbeaten record to 19-0 while handing Wilder his first defeat and taking the ‘Bronze Bomber’s WBC belt, which is on the line again at the T-Mobile Arena in Las Vegas this weekend.A full-capacity 20,000 crowd is expected to attend the seismic bout,...
COMBAT SPORTS・18 DAYS AGO

The Cincinnati Bengals will reportedly sign running back Elijah Holyfield to their practice squad, according to Ian Rapoport of NFL Network. The Georgia product is the son of former boxing heavyweight champion Evander Holyfield. Holyfield spent the preseason with the Philadelphia Eagles but was waived before the start of the...
NFL・10 DAYS AGO
FanSided

Marc Castro had one of the best amateur boxing careers you will ever see. He’s carrying his success to the pro ranks in the hopes of a takeover. Marc Castro has a lot of eyes on him. The 22-year-old from Freson, CA, fights in his hometown at Chukchansi Park on Saturday, Oct. 16. The hometown kid is undefeated at 3-0, with 3 KOs, but the promise established during his amateur days has his name buzzing in the boxing world.
COMBAT SPORTS・7 DAYS AGO
abcnews4.com

CHARLESTON, S.C. (WCIV) — Al "Hollywood" Meggett, the iconic trainer who established the Charleston Boxing Club on King St., has died at the age of 90. Meggett, who began training boxers in the 1950s, moved from Harlem to the Lowcountry in the late '70s. Perhaps his most talked about achievement was bringing the legendary Muhammad Ali to the Lowcountry, but he was also passionate about training young boys and girls in boxing.
CHARLESTON, SC・9 DAYS AGO
MMAmania.com

Floyd Mayweather vs. Jake Paul in a professional boxing match might be a reality if the YouTuber-turned boxer gets his way. Paul (4-0) has laid down the challenge to Mayweather (50-0), under the condition the two meet in a professional boxing match. Paul is coming off a split decision win over former Ultimate Fighting Championship (UFC) Welterweight titleholder Tyron Woodley (watch highlights); meanwhile, Mayweather out-performed Jake’s older brother Logan Paul (highlights here) in an eight-round exhibition.
COMBAT SPORTS・17 DAYS AGO