For 23-year-old Ciara Bravo, ‘Cherry’ is a star-making role 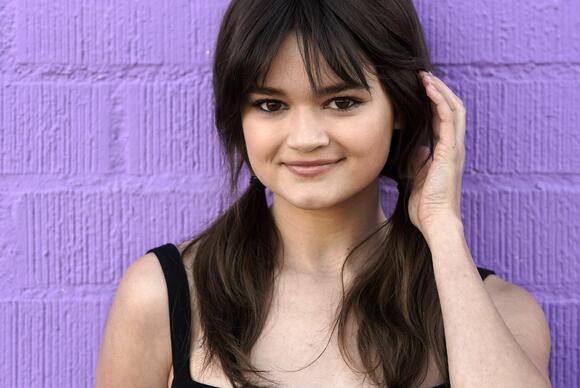 Ciara Bravo didn’t have high hopes for her prospects when she saw the names attached to “Cherry.” She’d been working in the business for over a decade, but it was mostly in television and bit film roles. No way, she thought, was she going to be cast to star opposite “Spider-Man” himself, Tom Holland, in a major film based on a bestselling memoir about PTSD and opioid addition from Marvel maestros Joe and Anthony Russo.

“It was SO out of my league,” Bravo said in a recent interview.

She sent in a tape anyway and for four weeks she didn’t hear a word. When her agent texted saying he had news, her first thought was that he was going to drop her. Not because of him, she said, “He’s wonderful.” It was just her anxiety.

Then he dropped the bombshell: She got the role. No second audition. No meeting. No chemistry test. The tape was that good.

“When Ciara’s audition came to us at AGBO, we said, ‘Stop the presses,’” said Tom Larocca, a producer and the co-founder of the company. The Russos even claim they knew after 20 seconds.

It’s not unlike the revelation many have had or will have once they see her in the film, which is currently in theaters and hits Apple TV+ on Friday. Earlier this year, Robert Downey Jr. declared himself “her new biggest fan” and waxed poetic about her raw and vulnerable performance as a woman who gets drawn into addiction along with her partner, Cherry. Yes, it’s Holland’s big foray into more adult films. But it’s Bravo who steals the show. Now, at just 23, she’s on the brink of stardom.

Bravo hails from Alexandria, Kentucky, just across the river from Cincinnati. When she was around 8, she was spotted by an agent at a county fair who asked her mother if she was interested in acting or modeling.

“It sounds fake, I know,” Bravo laughs. “And also, like, the scariest start to any story.”

But soon after she and her mother started taking trips to Los Angeles for auditions. About four years in, she got her first big break in the Nickelodeon series “Big Time Rush” and then in the channel’s movie “Jinxed.”

“I feel very lucky that my mom never put too much weight or pressure on it. She was very clear that the second I stopped enjoying acting, we didn’t have to keep doing it,” Bravo said. “I think that allowed me to just thoroughly enjoy the experience and just play and figure out what this world was and if I wanted to live in it or not.”

As she booked other things and started to learn more about the craft of acting and building a character, she realized she loved it and there was no turning back. At 18 she made the decision to forgo college for the moment and move to Los Angeles. More TV roles followed, notably on Fox’s “Red Band Society” and some films, too, including the indie “The Long Dumb Road” and the Netflix anorexia drama “To The Bone.” But “Cherry” was the game-changer.

In the book, her role, Emily, is only seen through Cherry’s eyes, which the filmmakers knew was a problem for the movie. Bravo credits the screenwriters Angela Russo-Otstot and Jessica Goldberg for helping turn this idealized projection into a flawed, three-dimensional person. Then she took it to the next level.

“When Ciara came aboard, we felt there was a full character behind her performance, one we hadn’t guessed at,” Anthony Russo said. “She brought vulnerability and a fierceness to her that was unpredictable.”

Bravo dove headfirst into the preparation, reading everything she could and dissecting the script while on the Calgary set of the FX series “A Teacher.” She even went to Cleveland a few weeks early to visit a rehab facility to try to understand more the life of an addict.

“I know without them being very frank and honest about what it looked and felt like to battle a beast like heroin addiction, I wouldn’t have been able to do a quarter of the work that I did on this project,” Bravo said.

It was a hard shoot that required intimacy coordinators, drug consultants and a lot of trust between her and her collaborators. The Russo brothers, she said, always checked in with her to make sure she was feeling safe. And, of course, she had Holland.

Forging the relationship with her co-star was, “The easiest part of the whole process,” she said. “He’s got such a great heart and he’s an absolute joy to be around. He’s just this warm, bubbly guy.”

In the few weeks before the shoot, they went to dinners with the cast and the crew and spent many days just sitting on his patio or his couch, watching movies and TV over cups of tea and talking about life. Among their selections: A lot of “New Girl” and Disney’s “Aladdin.”

Now, Bravo is thinking carefully about her next move. She’s been grateful for the time and space over the past year to reflect on where she wants to go from here. And the opportunities are already starting to light up now that “Cherry” is out. She’d like to direct at some point, maybe even a documentary. But for now it’s all acting.

“That’s where my true passion lies,” Bravo said. “And I want to keep riding this train for as long as possible and see where it takes me.”

NASHVILLE, Tenn. (AP) — Stars and fans react to the death of Loretta Lynn, who died Tuesday at her home at 90. —- “Mama and Loretta Lynn were four years apart, Mama being the oldest. They always reminded me a lot of each other. Strong women, who loved their children and were fiercely loyal. Now they’re both in Heaven getting to visit and talk about how they were raised, how different country music is now from what it was when they were young. Sure makes me feel good that Mama went first so she could welcome Loretta into the hollers of heaven!” — Reba McEntire on Instagram. “We’ve been like sisters all these years we’ve been in Nashville and she was a wonderful human being, wonderful talent, had millions of fans and I’m one of them. I miss her dearly as we all will.” — Dolly Parton wrote on Twitter.
NASHVILLE, TN・40 MINUTES AGO
Decider.com

Stream It Or Skip It: ‘Sherwood’ On BritBox, Based On A True Story About Two Murders And A Massive Manhunt

It’s not often that you see a scripted series “based on true events” fictionalized to the degree that the new BritBox series Sherwood is. Its story is based on two murders in Nottinghamshire in 2004, but not only have all the characters been created from whole cloth based on the story, but the timeline has been carried forward 18 years, to the present day. How does that free up the show’s writer to tell what’s a pretty complex backstory? SHERWOOD: STREAM IT OR SKIP IT? Opening Shot: An overhead shot of a thick forest of trees. Then we switch to scenes from a...
TV SERIES・19 MINUTES AGO
Deadline

Less than a day after the announcement that Mark Pedowitz would leave the CW, the cast and creator of The Winchesters took time to honor the chairman and CEO who championed their Supernatural spinoff. “Jared (Padalecki) and I referred to him as the other Winchester,” said Jensen Ackles, the former star of Supernatural who is now EPing the spinoff. He will also reprise his Dean Winchester character as a narrator of the new show. “Mark was one of the greatest champions of TV over the last I don’t know how many years, and was an enormous champion of Supernatural,” added...
TV SERIES・21 MINUTES AGO
Deadline

Broadway held fairly steady at the box office last week, with recent arrivals Leopoldstadt and The Piano Lesson leading the pack of fall newcomers with grosses of $758,988 and $704,051, respectively. In all, Broadway’s 25 current shows took in $25,208,583 for the week ending Oct. 2, a slight 4% slip from the previous week, possibly due to at least in part to the Rosh Hashanah holiday. Attendance was off by only 2%, to 209,668. With six new productions joining the roster in recent weeks, a couple of the old-timers stole some thunder: In it’s final week on Broadway, Come From Away...
MOVIES・18 MINUTES AGO

"I didn't know if I could make another movie period, [let alone] another Black Panther movie, because it hurt a lot."
MOVIES・2 MINUTES AGO
BuzzFeed

Velma Is Officially A Lesbian In "Trick Or Treat Scooby-Doo!," And FINALLY

Scooby-Doo fans are ecstatic that Velma is finally being outright portrayed as a lesbian: "I never thought I'd live to see the day when Velma is very clearly having gay thoughts on-screen."
MOVIES・2 MINUTES AGO
BuzzFeed

Grab a cup of hot chocolate, a cozy blanket, and one of these books.
BOOKS & LITERATURE・2 MINUTES AGO
BuzzFeed

The girls who get it, get it.
BEAUTY & FASHION・2 MINUTES AGO

18 Tweets That Rightfully Went Viral This Week Because They're Hysterical

"What if they faked the queen’s death just so they could have the most shocking Masked Singer reveal ever?"
BEHIND VIRAL VIDEOS・2 MINUTES AGO
BuzzFeed

"The fact that the Hocus Pocus 2 premiere isn't a national holiday for the girls and the gays is just another reminder of how much work there's left to do in this country."
MOVIES・2 MINUTES AGO