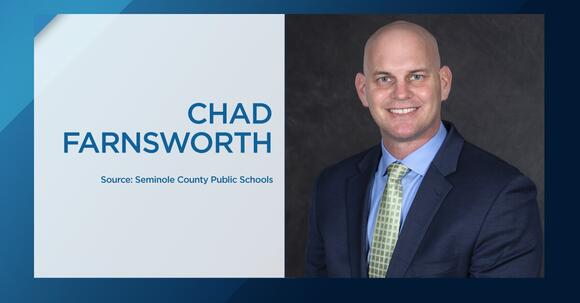 Chad Farnsworth, assistant superintendent for Lake County Schools, was tapped to take over for retiring superintendent Walt Griffin, but the board reversed that decision after outcry from some parents.

The board ultimately hired Serita Beamon, the School Board attorney, instead of Farnsworth.

In a letter to the School Board, Farnsworth said his work history was misrepresented in a meeting on Tuesday.

“Under the guise of ‘fact-checking,’ you directed staff to share details from old audit findings without proper context, all in a weak attempt to cover what many in the community perceived to be corrupt, unethical, and potentially unlawful actions of the board,” Farnsworth wrote.

Farnsworth wrote he “sat back in silence out of respect for the (hiring) process, though I have found (the board’s) process to be terribly flawed.”

A Seminole County resident is challenging the school board’s recent controversial decision to rescind their vote to hire Farnsworth.

Farnsworth said he’s no longer interested in the job and is asking the district to cease and desist misrepresenting his past.

TAVARES, Fla. — The Tavares police chief announced Friday that she is recommending that a police officer be terminated following an internal affairs investigation. Chief Sarah Coursey said the investigation revealed that officer Jason Baugh, who’s been with the department for 14 years, violated city policy during an interaction with a citizen. That violation, she said, should result in his termination.
2 DAYS AGO
WFTV Channel 9 Orlando

ORANGE COUNTY, Fla. — City Council will be voting for a new ordinance that will change the meaning of bars, restaurants and nightclubs in Downtown Orlando. The ordinance creates new and separate definitions for the three types of establishments in the city code. The goal is to manage these...
13 HOURS AGO
WFTV Channel 9 Orlando

TAVARES, Fla. — Habitat for Humanity of Lake-Sumter held their fourth annual “Jingle Build-Off” on Saturday. This year’s was the largest playhouse building event so far, as 13 different playhouses were built for donating to kids for the holidays. Teams competed to build their houses and...
10 HOURS AGO
WFTV Channel 9 Orlando

ORANGE COUNTY, Fla. — A 20-year-old man has died after being shot in Orange County, the sheriff’s office said. The shooting happened around 10:40 a.m. Sunday in the 14000 block of Osprey Links Road. Deputies said the victim was transported to a nearby hospital, where he was pronounced...
11 HOURS AGO
WFTV Channel 9 Orlando

MARION COUNTY, Fla. — A dog has died and a family of seven is displaced after a house fire Sunday, Marion County Fire Rescue officials said. Firefighters said the fire was under control at 4:45 p.m., about 15 minutes after they responded to reports of a fire. Multiple 911...
6 HOURS AGO
WFTV Channel 9 Orlando

Man dies after being shot in east Orange County

ORANGE COUNTY, Fla. — A man in his 50s was fatally shot Friday afternoon, the Orange County Sheriff’s Office said. The shooting was reported at about 2 p.m. on Dean Road, south of Lake Underhill Road. Much of the investigation Friday was focused behind a Family Dollar in...
2 DAYS AGO
WFTV Channel 9 Orlando

ORLANDO, Fla. — A Winter Park woman paid thousands of dollars to a popular dating service but claims it never delivered promised matches. Action 9 found dozens of customers who said they had the same experience. “I really don’t believe they have their client’s best interests at heart,” Meg...
2 DAYS AGO
WFTV Channel 9 Orlando

ORANGE COUNTY, Fla. — A shooting in a neighborhood near Apopka sent a man to the hospital Thursday, the Orange County Sheriff’s Office said. Deputies responded to Grimke Avenue near Clarcona Road shortly before 2 p.m. At the scene, they determined that the victim, in his 20s, sought...
2 DAYS AGO
WFTV Channel 9 Orlando

OSCEOLA COUNTY, Fla. — A man has died after a crash in Osceola County, Florida Highway Patrol says. The crash happened close to midnight on South Orange Blossom Trail and Charity Street. Troopers said the 47-year-old was riding his bicycle when he ran into the path of a pickup...
1 DAY AGO
WFTV Channel 9 Orlando

POLK COUNTY, Fla. — Florida Highway Patrol is looking for a suspect in a fatal hit-and-run crash in Winter Haven that happened Saturday evening. The crash happened on North Lake Howard Drive close to 7 p.m. Troopers said that a vehicle was traveling eastbound when it hit the 59-year-old...
17 HOURS AGO
WFTV Channel 9 Orlando

BREVARD COUNTY, Fla. — The Florida Highway Patrol reported a deadly crash along State Road 520 near Cocoa early Friday. Around 1 a.m., troopers responded to the crash located beneath the Interstate 95 overpass. FHP shut down the eastbound lanes of SR-520 during its investigation. A Florida Department of...
2 DAYS AGO
WFTV Channel 9 Orlando

ORLANDO, Fla. — Orlando Health officials say they’re looking for anyone who may be able to help identify a patient who’s been at Orlando Regional Medical Center for weeks. >>> STREAM CHANNEL 9 EYEWITNESS NEWS LIVE <<<. The patient is described as a Hispanic man in his...
2 DAYS AGO
WFTV Channel 9 Orlando

ST. CLOUD, Fla. — A Florida man is facing charges after deputies said he picked the wrong time and place to commit a crime. The Osceola County Sheriff’s Office said in a news release that a suspect attempted to steal from the Walmart in St. Cloud, but was thwarted upon finding the store filled with officers.
2 DAYS AGO
WFTV Channel 9 Orlando

ORANGE COUNTY, Fla. — Three people injured in the fire Thursday evening at an Orange County fireworks warehouse have died, according to the Orange County Sheriff’s Office. It has been confirmed that Landon Bourland, 24, David Gonzalez, 22, and Lindsey Phillips, 23, have died after being transported to the hospital, the sheriff’s office said.
1 DAY AGO
WFTV Channel 9 Orlando

SANFORD, Fla. — Sanford Police are looking for a suspect after a major hit-and-run crash that closed multiple roads. The crash happened somewhere along 25th street near Hartwell Avenue and Hardy Avenue. Officers said they are possibly looking for a silver Mitsubishi Outlander 2016-2019 model. The vehicle has substantial...
1 DAY AGO
WFTV Channel 9 Orlando

Domestic assault suspect charged after barricading himself in Kissimmee home

OSCEOLA COUNTY, Fla. — A man was arrested Friday after Osceola County deputies say he threatened his family with a fake gun before barricading himself in their home. Deputies were called to the home near the Mill Creek RV resort around noon for a report of a barricaded, suicidal person who had pointed what appeared to be a gun at a family member.
2 DAYS AGO