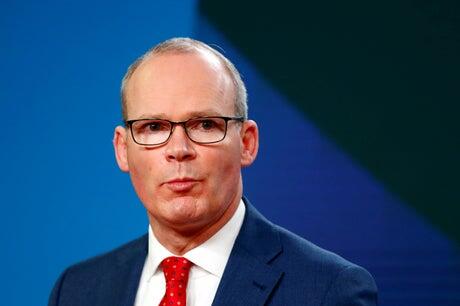 Ireland’s foreign affairs minister has claimed the UK is a negotiating partner the EU “simply can’t trust”, after Boris Johnson ’s government announced plans to unilaterally change a part of the Brexit agreement.

Simon Coveney’s remarks follow a legal threat issued by Brussels against the British government , who it accused of being in “violation” of the Northern Ireland Protocol over plans to extend the “grace period” for businesses.

Supermarkets in Northern Ireland have struggled with supply issues since the Brexit deal came into force on 1 January and concerns have been raised the problem will worsen when the light-touch regulation scheme expires at the end of March.

The grace period — a temporary relaxation of checks for supermarkets and suppliers — was put in place to allow firms time to adapt to new trade barriers across the Irish Sea.

But in written statement published on Wednesday , Brandon Lewis, the Northern Ireland secretary, said the government would be “taking several operational steps to avoid a disruptive cliff edges” and that the grace period would be extended until October.

Ministers had asked the EU to extend the grace period until 2023, but Brussels had declined to do so thus far.

Echoing comments from Marcos Sefcovic, the vice president of the European Commission, who said he had “strong concerns” over the move, Mr Coveney described the action as “very frustrating” in an interview with RTE Radio 1.

“This is not the first time this has happened, that they are negotiating with a partner that they simply can’t trust,” he said.

“That is why the EU is now looking at legal option and legal actions which effectively means a much more formalised and rigid negotiation process as opposed to a process of partnership where you try to solve problems together, so this is really unwelcome.

“It’s the British government essentially breaking the protocol, breaking their own commitments again, and the EU having to then consider how they respond to that.”

The Irish foreign affairs minister added: “Ironically, some of the things the British government has now unilaterally decided to announce, the Irish government has been advocating for in Brussels and in my view we were making progress on.

“But the way in which the British government has done this, which essentially is to ignore the commitments they have made, the relationships that they have built with the EU side, and instead to make decisions on the basis of politics in Westminster.”

The UK’s move also comes after the hardline Brexiteer, Lord David Frost, was appointed to the cabinet as minister for relations with the EU — taking over responsibilities from Michael Gove as London’s representative on the Joint Committee with Brussels on the implementation of the Brexit agreement.

Mr Coveney added he had a “blunt” conversation with Lord Frost and Mr Lewis on Wednesday after learning of the UK government’s intentions and “strongly advised them not to do it”.

He added: “Before Lord Frost had even spoken with in detail with Marcos Sefcovic in his new role this was announced in a written statements by the British government in Westminster. To say this is disrespectful would be an understatement.”

On Wednesday evening, a UK government spokesperson said: “Lord Frost explained that the measures announced today, following official-level notification to the Commission earlier this week, were temporary technical steps, which largely continued measures already in place, to provide more time for businesses such as supermarkets and parcel operators to adapt to and implement the new requirements in the Protocol.”

“He [Lord Frost] underlined that these were needed for operational reasons and were the minimum necessary steps to allow time for constructive discussions in the Joint Committee to continue without the prospect of disruption to the everyday life of people in Northern Ireland in the coming weeks.”

Boris Johnson: How many children does the prime minister have?

Labour has called for Boris Johnson to explain a secretive group of major Tory donors known as ‘The Advisory Board’ who have been given regular access to the Prime Minister and Rishi Sunak. The elite group of major Tory backers is reportedly comprised of those who have donated at least...

Prince Charles appeared mildly concerned for Johnson before laughing along with the prime minister as he wrestled with the umbrella.

Boris Johnson is facing a cabinet revolt over vaccine passports, having been accused of denying people their fundamental freedoms. The Prime Minister announced this month that certificates proving double jabs will be needed to enter indoor venues such as nightclubs from September. Government advisers have raised concerns that such environments...

A secretive ‘Advisory Board’ of wealthy Tory donors has “privileged access” to Boris Johnson and Rishi Sunak, it has been reported. The exclusive club was founded and managed by top Tory money man Ben Elliot - who also runs Quintessentially, a ‘concierge’ service for the rich. Regular meetings and calls...

England is lifting the mandated quarantine for fully vaccinated travelers from the the United States and the European Union starting Aug. 2, British authorities said on Wednesday. The British government says people who have received the appropriate doses of a vaccine approved by the FDA in the U.S. or the...

Irish Taoiseach Micheal Martin today raised hopes of a breakthrough in the post-Brexit border row between the UK and the EU as he said he believes it is possible to 'iron out' problems with the Northern Ireland Protocol. Mr Martin said the 'potential exists' to resolve the issues that have...

He has been accused of mischievous behaviour, such as chewing furniture and lifting his leg on a handbag. But now Boris Johnson has revealed his dog Dilyn really does have one seriously unpleasant habit. The two-year-old Jack Russell-cross likes to express his "romantic" urges by clinging on to people's legs,...

It was the moment when the cabinet hawks hungry to open up the economy finally overcame the more cautious doves. In allowing fully vaccinated people to enter the UK from the EU and United States without quarantine from next Monday, Boris Johnson and his ministers overrode warnings by scientific advisers that the move involved a “clear public health risk”. Significantly, Sajid Javid, the health secretary, focused on the “boost to the economy” rather than the possible downside on health from the potential to let in a new variant of Covid-19 capable of evading vaccine protection. His predecessor Matt Hancock...

(AFP) — The EU said Thursday it was pausing its legal action against Britain for allegedly breaching the Brexit deal on Northern Ireland as it weighs London's proposals to overhaul the pact. "We want to give ourselves the space to find the durable solutions for the implementation of the protocol,"...

Newly-published emails show Boris Johnson’s government used taxpayers’ money to conduct political polling on opposition figures, such as the Labour leader, under the guidance of Dominic Cummings.The former senior No 10 adviser led the charge in awarding Hanbury Strategy a £580,000 contract to do polling on the government’s response to the Covid pandemic. In messages released by the Good Law Project, Mr Cummings told the most senior civil servant responsible for Covid contracts to sign off on it, saying if “anybody in CABOFF [the Cabinet Office] whines tell them I ordered it from PM”.Labour said the newly-released emails showed “all the hallmarks of a racket” and claimed taxpayers’ money had been “abused”.Meanwhile, Dominic Raab earlier suggested that the government’s “robust approach” to small boats crossing the English Channel is not “inconsistent” with the RNLI’s attempts to rescue migrants. Join the Green Party to save planet, says Johnson’s climate spokespersonPolitical commentator John Rentoul’s answers to your latest Brexit questionsEU pauses legal action over ‘serious’ UK breach of NI ProtocolThe many perils of spin doctors going off-message

Boris Johnson’s spokesperson for the upcoming COP26 summit in Glasgow has said people can “join the Green Party” if they want to help tackle climate change.Allegra Stratton, former Downing Street press secretary, has faced criticism for saying people could make a difference by not rinsing their plates before putting them in the dishwasher.She told The Independent joining the Greens was another one of the ways Britons could help protect the planet from rising carbon emissions.Asked why she thought other parties and organisations like the Green Party or Greenpeace were critical of her advice, she said: “When people say to me,...

The European Commission has paused legal action against the UK over the implementation of the post-Brexit deal on Northern Ireland, in the hope that solutions to outstanding issues can be found. Brexit minister Lord Frost has demanded that significant changes are made to the Northern Ireland Protocol, an element of...

Boris Johnson has been interviewed in the rain outside a police station about his crime plan for England and Wales. He made a number of claims about crime and policing. 'Two years ago, I said I wanted another 20,000 officers on the streets of our country and we've now got to almost half of the way there'

Boris Johnson has rejected Brussels’ latest attempt to iron out problems with the post-Brexit arrangements for Northern Ireland, insisting that the withdrawal agreement signed last year must be renegotiated. A series of proposals published by the European Commission on Monday with the aim of easing implementation of the Northern Ireland...

Plans that would open green spaces to Los Angeles-style development will do nothing to level up the regional divide, says the Guardian columnist Simon Jenkins

A rebellion is stirring in Boris Johnson’s backyard

TUDELEY, England — Hugh Patterson could sense victory when he ran in local elections this year even though this area of rolling countryside, picturesque pubs and pricey rustic homes was a stronghold for his opponent from Prime Minister Boris Johnson’s Conservative Party. What Patterson was not expecting was a landslide.