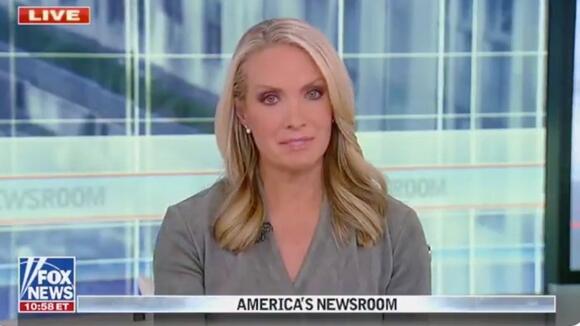 Fox News anchor Dana Perino became tearful during a segment on “America’s Newsroom” on Thursday in an interview with a survivor of domestic violence discussing Illinois’s move to end cash bail.

Cassandra Tanner Miller said that she had just put her son down for a nap when Chris Miller appeared at her door and began to beat her and strangle her.

"My estranged husband was standing at my back door, whipped it open, stepped inside and said, 'Are you all ready to die?' " Cassandra Tanner Miller said.

"I yelled to my daughter to go get my son, to get out and don't stop for anything. But my estranged husband dragged me in front of the stairs blocking any exit that my children would have had," she said.

Chris Miller had been arrested earlier that month on aggravated assault and other charges but was released on a “no cash bail bond.” Cassandra Tanner Miller said the morning of the incident her husband was supposed to be in court for the charges.

Perino had tears in her eyes listening to the story and told co-anchor Trace Gallagher that “I don't think I've ever cried on TV. That was really hard.”

“I understand that there is concern that cash bail has hurt segments of the population, that there's concern that minorities are hurt more. But we also have to think about these victims,” Perino said.

The segment came after Illinois Gov. J.D. Pritzker (D) signed a bill that would make Illinois the first state to end cash bail by 2023, The Chicago Tribune reported.

Cassandra Tanner Miller met with Pritzker after the incident where he asked her how he could help prevent another tragedy like hers from happening again, she said.

She said she asked him not to sign the bill as no cash bail has harmed domestic violence survivors like her.

“He absolutely let me down. I made a plea to him prior to him signing this bill asking him to hold up and to actually think about victims,” Cassandra Tanner Miller said. “This is the problem with the justice system as in a whole is that the people that are in power that make promises … giving us false hope ... only to let us down and put us more in harm’s way.”

“He completely failed the entire domestic violence community,” she added.

Fox News host Sean Hannity encouraged his audience to consult with their doctors about the Covid-19 vaccines and even said he believes in vaccine science, despite several hosts on the network consistently pushing vaccine disinformation.

Executives at Fox News Channel believe one of the core elements behind the durability of the network’s late-afternoon panel program, “The Five,” is the connection between founding panelists Dana Perino and Greg Gutfeld. When the pair first met, however, they seemed to find little in common. Gutfeld, then hosting the...

Fox News host Tucker Carlson is reportedly "furious" with Fox News executives for not "backing him up" over his allegations that the National Security Agency (NSA) was spying on him. "Tensions are sky high," a source familiar with the matter told CNN, according to a report published Monday. According to...

Ex-Fox reporter explains why Tucker Carlson is lying about vaccines

Officer Fanone Hits Back at Tucker Carlson and Laura Ingraham, Connects Their Rhetoric to Capitol Riot

Officer Michael Fanone hit back at Tucker Carlson and Laura Ingraham after the Fox News prime time hosts mocked and ridiculed his testimony before a Congressional Select Committee investigating the Capitol attacks on January 6th. Fanone revealed during Tuesday’s hearing that he’d been “left with psychological trauma and emotional anxiety...

“If you have the chance, get the shot. It will save your life.”. It was the kind of pro-vaccine message that a TV viewer has grown accustomed to hearing from public health officials, pop stars or President Biden. But it was delivered on Monday morning by Steve Doocy, co-host of the strongly right-leaning morning talk show “Fox & Friends” on Fox News Channel.

Fancy some infighting? Look no further than the latest spat Wednesday between Fox News personalities Geraldo Rivera and Sean Hannity over the topic of the violent January 6 riots. Though the two are friends off-air, Rivera spared no words when he accused Hannity of “gaslighting” the public regarding the Capitol insurrection.

Another Terrible Week for Terrible Human Being Tucker Carlson

Tucker Carlson’s truly terrible week began with a person turning the tables and calling out Fox News’ star propagandist on camera, and ended with possibly his biggest remaining advertiser deciding to leave Fox News altogether. It started in a bait shop in Livingston, Montana, where Tucker encountered a man, Dan...

Former Fox News reporter Carl Cameron on Monday called out Tucker Carlson’s doubtful diatribes against COVID-19 vaccines, saying his ex-colleague at the conservative network was “gaslighting” viewers for ratings and revenue. “It’s about ratings and ratings ultimately become revenue, and that’s the name of the game,” Cameron told CNN’s “New...

CNN's Don Lemon defended broadcasting rival Tucker Carlson’s right to “personal space” after a viral video of the Fox News host showed him being verbally accosted by a man inside a Montana fly fishing shop. The Louisiana-born anchor sided with Carlson on his CNN program “Don Lemon Tonight” on Monday,...

A man confronted Fox News anchor Tucker Carlson at his local fishing store and the outlet was not pleased - despite Carlson urging people to confront people in public just three months prior. Dan Bailey, the man in question, posted a video of himself on his Instagram approaching Carlson in...

Megyn Kelly Being ‘Wooed’ To Replace Meghan McCain On ‘The View’?

Is Megyn Kelly coming back to TV? One tabloid is claiming the former FOX News anchor is ready to return to the talk show genre, this time taking Meghan McCain’s seat on The View. Gossip Cop investigates. Is Megyn Kelly Going To Join ‘The View’?. OK! is reporting that Kelly...

A video of a man telling Fox News host Tucker Carlson that he's "the worst human being" has gone viral on social media. The 22-second clip, shared to Instagram by user @danbaileymt on Friday, shows an unnamed man calmly confronting Carlson in a fishing store. The Fox News host attempted to reason with the man and eventually walked away from their heated chat.

Tucker Carlson's first-grade teacher calls his description of her in his book 'the most embellished, crazy thing I ever heard'

Carlson described his teacher, Mrs. Raymond, as "a parody of earth-mother liberalism" whose "blubbering" provoked his conservative awakening.

Meghan McCain defended Fox News over criticism that the conservative network’s coverage of Covid-19 has led to vaccine hesitancy amongst its viewership. McCain is a former employee of Fox News and her husband, Ben Domenech, is a paid contributor and occasional guest host for the cable outlet as well. The...