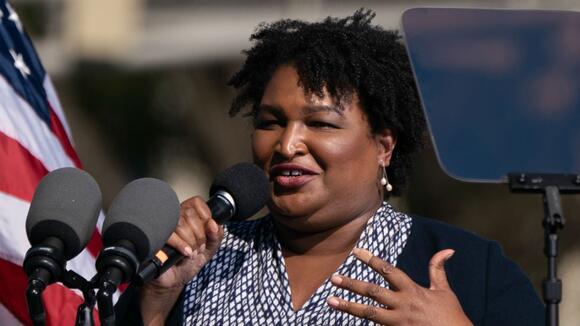 A 30-second ad released by the voting rights organization on Tuesday specifically calls out measures recently filed by Republicans in the state that would place further restrictions on voting by mail.

“Georgians of both parties have voted by mail for decades. Almost half a million Georgia Republicans did it just last year. The GOP knows voting by mail works, it was their idea,” the ad states.

“It’s how Republicans have been winning Florida. But now, the same Georgia politicians who passed these laws want to make voting harder. That means longer lines, higher taxes, harder for you. Tell Georgia politicians: don’t mess with Georgia’s voting laws,” it continues.

Among a number of bills Republican state senators have filed this month that would directly impact absentee voting includes one measure that seeks to put an end to no-excuse absentee voting. The bill comes after the state saw record absentee voter turnout in the presidential election, when it also went blue for the first time since 1992.

Georgia Secretary of State Brad Raffensperger (R) had pushed for the voting practice, which has been in effect since it was green-lighted nearly two decades ago by a GOP-led legislature, to end back in December, according to The Associated Press.

At the time, Raffensperger claimed the practice opened "the door to potential illegal voting" without providing justification, the news agency reported. The comments from Raffensperger came as he faced criticism from former President Trump over his handling of the November race after Joe Biden won the formerly reliably red state.

Republican legislators in the state have claimed the recent voting legislation is aimed at boosting confidence in election security in Georgia after Trump and a number of GOP lawmakers repeatedly spread disputed claims of widespread voter fraud following his defeat in the November race.

However, Democrats and voting rights advocates have argued the bills come in response to the wins their party secured in the presidential election and last month’s pivotal U.S. Senate runoff races.

In a statement on Tuesday, Lauren Groh-Wargo, CEO of Fair Fight Action, accused Georgia Republicans of an “anti-voting agenda” and said their recent voting legislation “threatens the ability of all Georgians to easily and safely cast their ballot -- including the hundreds of thousands of Republican mail voters.”

“Though Republicans have doubled-down on an unconstitutional voter suppression agenda targeting voters of color, the barriers they are creating will hurt their own base of support. The Republican party should clean their own house up, and focus on learning how to run modern campaigns and run better candidates who focus on issues, not conspiracy theories,” Groh-Wargo said.

“The battlegrounds of Florida and Ohio have similar voting access to Georgia yet Republicans have been winning there- those states should serve as a lesson for them on how access to the ballot can work in their party’s favor- if they do the work,” she added.

Early voting in Georgia’s runoff election between Sen. Raphael Warnock (D) and GOP hopeful Herschel Walker kicked off over the weekend, marking the final stretch in a race that will determine whether Democrats expand their majority in the upper chamber or Republicans maintain a 50-50 split. The runoff, which...
GEORGIA STATE・18 HOURS AGO
The Hill

The eight most vulnerable Senate Democrats in 2024

Senate Democrats are gearing up for what’s expected to be a challenging reelection environment in 2024 even as they await the results of a Senate runoff in Georgia between Sen. Raphael Warnock (D) and Republican Herschel Walker next month. About two dozen Democrats or those who caucus with the...
GEORGIA STATE・1 DAY AGO
The Hill

Rep. Michael McCaul (R-Texas) on Sunday said Republicans should “build a case” when asked if he supported potential efforts by House Republicans to impeach Department of Homeland Security (DHS) Secretary Alejandro Mayorkas over his handling of the U.S.-Mexico border. McCaul told ABC’s “This Week” co-anchor Martha Raddatz that Mayorkas has been “derelict in his responsibilities”…
1 DAY AGO
The Hill

Rep. Adam Schiff (D-Calif.), a member of the House Jan. 6 panel investigating the Capitol riot on Sunday pushed back on a Washington Post report suggesting tensions between committee staffers and Rep. Liz Cheney (R-Wyo.), the panel’s vice chair. The Post, citing interviews with 15 anonymous former and current committee staffers, reported on Wednesday that…
CALIFORNIA STATE・1 DAY AGO
The Hill

Top GOP figures and potential 2024 Republican presidential candidates spent the weekend criticizing former President Trump after reports surfaced that he had dinner at Mar-a-Lago with known white supremacist Nick Fuentes. Trump on Saturday blamed Ye, the rapper formally known as Kanye West, for arriving to a planned dinner between the two men with three…
NEW JERSEY STATE・1 DAY AGO
The Hill

Supervisors in Arizona’s Maricopa County voted unanimously to certify their election canvass ahead of a state deadline on Monday, defying Republican objections. Arizona gubernatorial candidate Kari Lake (R) and others in the GOP have seized on printer malfunctions in Maricopa County, Arizona’s most populous jurisdiction that includes Phoenix, making it an epicenter for election challenges as they called on supervisors to vote against certification.
MARICOPA COUNTY, AZ・15 HOURS AGO
The Hill

Former Rep. Denver Riggleman (R-Va.), who previously worked as an adviser to the House select committee investigating Jan. 6, said Sunday that committee vice chair Rep. Liz Cheney (R-Wyo.) had “outsized” influence over its work. Riggleman was speaking to CNN’s Jim Acosta ahead of the release of the...
WASHINGTON STATE・1 DAY AGO
The Hill

A tech advocacy group used a deep fake of Meta CEO Mark Zuckerberg in an ad mocking Congress for inaction over antitrust reform and urged a vote on a pair of bipartisan bills before the end of the year. Demand Progress Action’s ad launched Tuesday features the Zuckerberg deep fake...
WASHINGTON STATE・1 HOUR AGO
The Hill

Arkansas Gov. Asa Hutchinson (R), who is considering challenging former President Trump for the White House in 2024, called Trump’s recent dinner with white nationalist Nick Fuentes “very troubling” on Sunday. During an appearance on CNN’s “State of the Union” with co-anchor Dana Bash, Hutchinson criticized the...
ARKANSAS STATE・1 DAY AGO
The Hill

Rep. James Comer (R-Ky.) on Sunday said the House Oversight Committee will investigate about “40 or 50 different things” when Republicans take control of the House of Representatives next year. Comer, who will likely chair the panel when Republicans assume the majority, told NBC’s “Meet the Press” moderator Chuck Todd that Republicans “have the capacity”…
1 DAY AGO
The Hill

GOP rep: Trump ‘needs better judgment in who he dines with’

Rep. James Comer (R-Ky.) on Sunday said former President Trump “needs better judgment in who he dines with” after reports circulated that he shared a dinner with white nationalist Nick Fuentes and the rapper Ye, formerly known as Kanye West. “I would not take a meeting with that person,” Comer told NBC’s “Meet the Press”…
FLORIDA STATE・1 DAY AGO
The Hill

More than a dozen religious groups are calling on the Senate to pass the Respect for Marriage Act. The Respect for Marriage Act would address a national patchwork of marriage laws by requiring states to recognize interracial and same-sex marriages as legally valid if those unions were performed in a state without a statute or constitutional amendment prohibiting them.
CALIFORNIA STATE・14 HOURS AGO
The Hill

Sen. Joe Manchin’s (D-W.Va.) side deal with Senate Majority Leader Charles Schumer (D-N.Y.) to enact permitting reform before the end of the year is on life support as Republicans look to deprive the lawmaker of a major victory that could aid his potential 2024 reelection. Manchin is in discussions...
VIRGINIA STATE・1 DAY AGO
The Hill

American minister and social activist Rev. William Barber said on Sunday the Democratic party should stop looking to win the “elusive suburban vote” and instead focus on winning over lower-income voters. During an appearance on MSNBC’s “Velshi,” Barber, who co-chairs the non-profit Poor People’s Campaign, noted the share...
GEORGIA STATE・1 DAY AGO
The Hill

The GOP is locked in a battle with Arizona’s Maricopa County over its handling of the midterm elections, with Republicans claiming voter disenfranchisement and demanding certification delays as election officials vow to move ahead. The campaigns of Republican gubernatorial nominee Kari Lake and Republican secretary of state nominee Mark...
MARICOPA COUNTY, AZ・20 HOURS AGO
The Hill

Senate Republican Leader Mitch McConnell (Ky.) is calculating whether he wants to strike a deal with Democrats on a year-end spending package before Republicans take control of the House in January. The stakes are high for McConnell, who faces regular attacks from former President Trump and earlier this month survived...
1 HOUR AGO
Axios Des Moines

Iowa's Libertarian Party made small but notable gains in this year's midterm elections. State of play: Rick Stewart, the Libertarian candidate for governor, garnered 2.4% of the vote, helping the party regain official status in Iowa. That allows them to appear on voter registration forms and hold primary elections. By...
IOWA STATE・11 MINUTES AGO
The Hill

Schiff on complying with GOP subpoenas: ‘We will have to consider the validity’

Rep. Adam Schiff (D-Calif.) on Sunday said he’d have to “consider the validity” of any subpoena from Republicans when they take control of the House of Representatives in the next Congress. “We will have to consider the validity of the subpoena. But I would certainly view my...
1 DAY AGO