'Dr. Doom' economist Nouriel Roubini says bitcoin is not a hedge against inflation and investors are 'feeding the bubble' 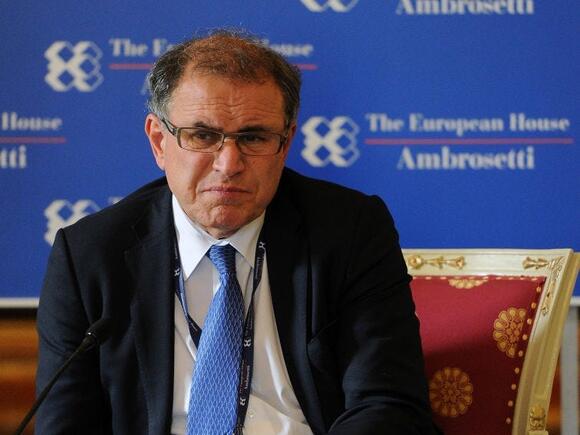 Nouriel Roubini, an economist known as "Dr. Doom" for his bearish views, said bitcoin is not a hedge against inflation and investors are "feeding the bubble" in an interview with Yahoo Finance on Monday.

"If people were really worried about inflation they would diversify in a wide range of assets that are historical good hedges against inflation. That's not happening," Roubini said.

"People say bitcoin's a store of value against tail risk, but in February, March of last year when US stocks went down, say 35%, bitcoin was not a hedge, it went down by 50%" the economist added. "The reality is that no one knows what the value of this pseudo-asset is."

Roubini has long been a critic of digital currencies, but after bitcoin hit a $1 trillion market cap last week the NYU professor has renewed his bearish calls.

Roubini said he sees the digital currency as a volatile "pseudo-asset" and argued much of the price movement "is driven not by worries about inflation or debasement of fiat currencies," but rather by "massive manipulation."

The economist said that there are a number of schemes used by digital currency whales to push the price of bitcoin higher. In particular, he highlighted the stable coin tether as an example.

Roubini said tether is "produced out of nowhere with we don't know which kind of backing and every other day there is another billion dollars of it that goes to buying bitcoin."

"We know there are a whole bunch of legal investigations by the DOJ, CFTC, the attorney general's office in New York, they are looking into what's going on," the economist added.

JPMorgan strategists including Josh Younger and Joyce Chang, also warned investors about tether in a note to clients last Thursday, per Bloomberg .

The analysts said Tether Limited is "engaged in a classic liquidity transformation along the lines of traditional commercial banks, but is not subject to the same strict supervisory and disclosure regime, and certainly does not have anything like deposit insurance."

They also warned problems with Tether could lead to liquidity issues in the crypto market and that Tether Limited has "famously not produced an audit."

Tether Limited announced a settlement with the New York AG for $18.6 million on Tuesday. The firm was accused of hiding $850 million in losses and has been under scrutiny to see whether it has sufficient cash reserves to back up all tether tokens in circulation, per CNBC .

Tether responded to questions about its business in a statement saying, "contrary to online speculation, after two and half years there was no finding that Tether ever issued tethers without backing, or to manipulate crypto prices."

"When you look at FTX US, there's an enormous amount of potential growth," Bankman-Fried told CoinDesk TV.

Billionaire Thomas Peterffy Invests in Crypto, Says There's a Chance It Could Be 'a Dominant Currency'

Why Bitcoin, Ethereum, and Dogecoin Popped -- Then Dropped

And for the first time ever, JPMorgan clients can start buying Ethereum, Bitcoin, and Dogecoin. More banks may follow JPMorgan's lead. It's finally Friday, and while this morning it looked like cryptocurrencies would end the week on a high note, things got ugly in a hurry. Buoyed by good news...

JP Morgan Chase, America's largest bank, is now offering crypto products to its wealthy clients. In an internal memo accessed by Business Insider, the bank communicated with its wealth advisors that they could take buy and sell orders for five cryptocurrency products starting July 19, 2021. This is a major...

September and October are likely to be "very rough" months for stocks, the chief investment officer told Bloomberg.

In a recent Bloomberg interview, Scott Minerd, Guggenheim's chief investment officer, reiterated his $15,000 Bitcoin price prediction:. Ultimately, I think that something in the neighborhood of $15,000 is where we are going to end up. He is convinced that there is still “some more air” to come out of the...

In an ironic twist given CEO Jamie Dimon’s well-established distrust of the industry, JPM. organ has reportedly become the first major US bank to provide all wealth-management clients with access to bitcoin and other cryptocurrency funds. Advisors in JPMorgan’s $630 billion wealth management division can now accept orders to buy...

July 23 (Reuters) - Goldman Sachs Group Inc’s prime brokerage division is clearing and settling cryptocurrency exchange-traded products (ETPs) for some of its European hedge fund clients, Coindesk reported on Friday, citing people familiar with the matter. The services are currently being offered to a limited number of clients and...

Psst! You Can Get A Bitcoin ETF Here

While you’re waiting for an exchange-traded crypto fund in the U.S., check out what’s on sale in Toronto or Frankfurt. The august securities authorities in the U.S. have yet to approve an exchange-traded fund for cryptocurrency. But bitcoin ETFs are up and running in Canada and Europe. You can get your hands on shares, if you know where to look.

Wood said citizens in emerging markets with "significant inflation" will migrate to bitcoin and other instruments to preserve their purchasing power.

60% of super-rich family offices own crypto or are interested as inflation soars, Goldman Sachs says

Goldman said many investment firms of the super-rich see bitcoin and other cryptocurrencies as possible hedges against inflation.

According to a Goldman Sachs survey on their family offices clients, there is growing acceptance and interest in adopting Bitcoin. The prominent investment bank said its survey on 150 ultra-wealthy families, which it deals with globally, revealed that about 15% of them had already invested in cryptocurrencies while another 45% admitted having plans to do so in the near future.

There’s still a long way to go, but analytics firm Gallup asked US investors about Bitcoin and got increasingly positive results. Slowly but surely, Bitcoin is reaching mainstream status. Gallup made a similar survey in 2018, and the compared data from both tells an interesting and bullish story. People with investable income are slowly waking up to the fact that there’s a new game in town.

In this edition of The Bull & The Bear podcast, I pit gold vs. bitcoin and tell you what I think is the better hedge bet in 2021. For decades, seasoned investors have used gold as a means to hedge against potential market downturns and inflation. Gold doesn’t have any...

As reported by blockchain tracker Whale Alert, over the past 16 hours, Ripple distributed ledger tech provider and the two largest crypto exchanges have shifted an astounding 110 million XRP coins. Half of that amount was moved by the Ripple DLT giant. 110 million XRP transferred by Ripple, Binance and...

4 Stocks That Can Make the Average Investor a Millionaire

The stock market trounces the average annual return of other investment vehicles over the long term. Patience is the key to becoming a stock market millionaire. There are a lot of ways to build wealth. You can squirrel your savings under the mattress, invest in real estate, or buy bonds and bank CDs to generate interest income, to name a few ideas. But of all the investment vehicles available, the stock market has been the most consistent wealth creator over the long run.

‘Fundamentally, Bitcoin Should Go Much Lower’, Nouriel Roubini Screams After BTC’s Fall Under $30,000

It has been a rough 24 hours for bitcoin investors. After trading sideways for a couple of weeks, bitcoin finally broke below the $30,000 support region for the first time in a month on Tuesday. The downward move has inadvertently cost the flagship cryptocurrency majority of the gains it had accumulated during the 2021 bull rally.