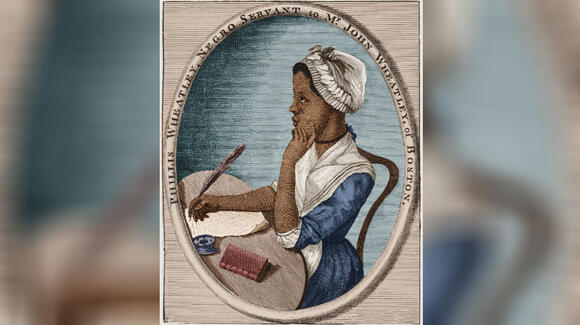 In a 1774 letter to the Rev. Samson Occom, Phillis Wheatley wrote that civil and religious liberty are “so inseparably united, that there is little or no Enjoyment of one without the other.”

No one can say for sure when she was born, but this much we know: Wheatley was a pioneering poet wiser than her years and before her time.

Her words to Occom prove that much.

Born in Senegal around 1753, Wheatley was kidnapped at age 7, taken to Boston on a slave ship and then purchased by John Wheatley to be a servant to his wife, Susanna.

Susanna, who was in ill health, took young Wheatley under her wing and, with her two children, taught her to read and encouraged her literary pursuits.

At a time when African Americans were discouraged and intimidated from learning how to read and write, Wheatley was encouraged to study theology, English, Latin, Greek, ancient history and literature.

She was just 13 when she wrote her first published poem about two men who nearly drowned at sea. That work was followed by several other published poems, increasing Wheatley's fame.

By 1773, Wheatley had gained considerable stature. That year, her first and only book of verse, "Poems on Various Subjects, Religious and Moral," was published. The volume included a preface in which 18 Boston men, including John Hancock, offered proof she was indeed the writer.

In publishing "Poems on Various Subjects," Wheatley became the first African American, the first U.S. slave and the third American woman to publish a book of poetry.

By 1778, the year John Wheatley died, she was legally free. She married a fellow free African-American from Boston named John Peters. The couple had three children, but all died young.

Facing debt and constant poverty, Wheatley found work as a maid in a boarding house and lived in squalid, horrifying conditions, said Barbara Bair, historian and curator at The Library of Congress.

Although she continued to write, she lost patronage for her poems.

"The growing tensions with the British — with whom her poems had gained popularity — and, ultimately, the economic turmoil of the Revolutionary War weakened the sales potential for her work," Bair said.

Wheatley died in her early 30s on Dec. 5, 1784, in Boston, with a second collection of poems left unpublished.

ZION, Illinois — (AP) — A holy miracle happened in Zion 115 years ago. Or so millions of Ahmadi Muslims around the world believe. The Ahmadis view this small-sized city, 40 miles north of Chicago on the shores of Lake Michigan, as a place of special religious significance for their global messianic faith. Their reverence for the community began more than a century ago -- with fighting words, a prayer duel and a prophecy.
ZION, IL・4 HOURS AGO