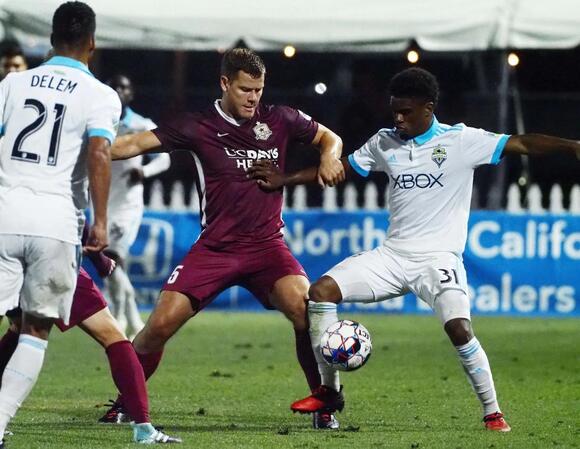 “Nick is a talented young player who has been a real standout at the youth, collegiate, and USL Championship levels,” Nashville GM Mike Jacobs said in a club statement. “He brings outstanding experiences from US youth national teams and a successful youth academy in Seattle. His pace and ability to join into the attack makes him someone who could become a successful left-sided player at this level.”

Hinds is a 23-year-old left back and a former U.S. youth international. He made 68 appearances with Seattle’s USL Championship affiliate, the Tacoma Defiance.

The story of Sunday’s AFC Championship Game is getting very muddied for many reasons. Over the next few days and weeks, NFL fans around the country will discuss the officiating of the game between the Kansas City Chiefs and the Cincinnati Bengals. It’s quite simple to understand why. These...
CINCINNATI, OH・13 HOURS AGO
Sportsnaut

Blake Hinson scored 21 points, including the bucket that gave Pitt its first lead since midway through the first half,
ARIZONA STATE・1 DAY AGO
Sportsnaut

The NFL salary cap will jump to a record $224.8 million in 2023, the league informed teams on Monday. The
22 MINUTES AGO
Sportsnaut

Less than 24 hours after being let go by the Dallas Cowboys, Kellen Moore reportedly has a new job. NFL
DALLAS, TX・1 HOUR AGO
Sportsnaut

Future Hall of Fame point guard Chris Paul is in the back end of his career. The Phoenix Suns star
PHOENIX, AZ・20 HOURS AGO
Sportsnaut

Eleven years after being let go by the Philadelphia Eagles, coach Andy Reid has his sights set on revenge, with
KANSAS CITY, MO・15 HOURS AGO
Sportsnaut

For a guy who continues to say all the right things when commenting on his loyalties to the Michigan Wolverines
DENVER, CO・1 DAY AGO
Sportsnaut

After four years with Kliff Kingsbury at the helm, the Arizona Cardinals find themselves searching for a new head coach
CINCINNATI, OH・3 HOURS AGO
Sportsnaut

NFL officials had a Championship Sunday to forget, with blown calls and questionable decisions that left the football world scratching
KANSAS CITY, MO・5 HOURS AGO
Sportsnaut

The Winnipeg Jets will try to snap out of their midseason funk Monday when they host the slumping St. Louis
SAINT LOUIS, MO・23 HOURS AGO
Sportsnaut

Cardinals general manager Monti Ossenfort is making good on a promise to cast a wide net in Arizona’s search for
CINCINNATI, OH・2 HOURS AGO
Sportsnaut

Two teams that have positioned themselves to make rare playoff appearances hope to continue to rise at the other’s expense
SACRAMENTO, CA・20 HOURS AGO
Sportsnaut

Terry Rozier scored 31 points and P.J. Washington added 27 to propel the Charlotte Hornets to a 122-117 victory against
CHARLOTTE, NC・22 HOURS AGO
Sportsnaut

The Washington Wizards and the San Antonio Spurs will square off Monday in the Alamo City in a battle of
SAN ANTONIO, TX・19 HOURS AGO
Sportsnaut

The Washington Wizards and the New Orleans Pelicans are heading in different directions as they meet Saturday night in New
NEW ORLEANS, LA・2 DAYS AGO
Sportsnaut

Blazers out to close homestand on high note vs. Hawks

A favorable 11-game stretch concludes Monday night for the Portland Trail Blazers, and the club didn’t take advantage of the
PORTLAND, OR・18 HOURS AGO