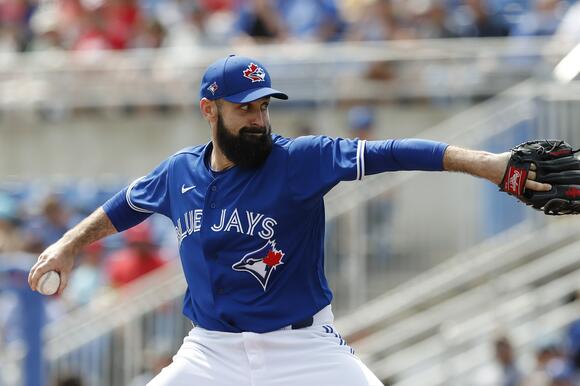 MINNEAPOLIS (AP) — The Minnesota Twins and right-hander Matt Shoemaker finalized a one-year, $2 million contract on Friday, another experienced addition to the rotation on the first day of workouts for pitchers and catchers at spring training.

He will start his ninth major league season, after spending two injury-dominated years with the Toronto Blue Jays. He made six starts in 2020 and missed a month with shoulder inflammation.

The Twins recently signed J.A. Happ to join José Berríos, Kenta Maeda and Michael Pineda in the rotation. Only Berrios (26) is younger than 32 in the group. Minnesota has won the last two AL Central titles.

Another blow for Yankees bullpen going into postseason

ARLINGTON, Texas (AP) — Yankees reliever Ron Marinaccio was put on the 15-day injured list Tuesday, another blow to the injury-plagued New York bullpen before the playoffs. Marinaccio has a stress reaction in his right shin. The rookie right-hander threw only 12 pitches before exiting Sunday because of soreness that he has described as a lingering issue. He will miss the AL Division Series. Manager Aaron Boone said he is hopeful that Marinacco will be able to return for the AL Championship Series if the Yankees advance in the postseason. “Just made that kind of difficult decision right now. He definitely wants to try and pitch through it,” Boone said. “There’s probably a lot that he could pitch through it. It’s kind of a gray area. But we also worry about it turning into a stress fracture” when compensating in other ways.
BRONX, NY・1 DAY AGO
The Associated Press

Steven Kwan makes the Guardians go from the top

CLEVELAND (AP) — Before stepping into the batter’s box, rookie outfielder Steven Kwan squats for a moment, much the way his idol, Ichiro Suzuki, did. The ritual centers Kwan, allowing Cleveland’s pesky leadoff hitter to move on to what’s next — getting on base or in a pitcher’s head. Then, like the Japanese superstar, Kwan holds his hands close to his body and still — with his bat perpendicular — before swinging at a pitch or watching it pass. He’s gotten it right more often than anyone expected this season — just like the surprising Guardians.
CLEVELAND, OH・1 HOUR AGO
The Associated Press

ARLINGTON, Texas (AP) — A mother-son trip to a major league game for a Florida family in need of diversion after their home was hit by Hurricane Ian turned into much more on Tuesday afternoon. Samantha Sheffield and 14-year-old son Braylon were in town from storm-ravaged Fort Myers, sitting in the lower deck in left field at Globe Life Field when New York Yankees rookie Oswald Peraza hit a long drive in their direction against the Texas Rangers. Braylon, a good-fielding middle infielder, reached to his left in front of his mom and made the catch on Peraza’s first big league homer, four rows beyond the wall. “Saved my life,” Samantha said with a laugh.
BRONX, NY・1 DAY AGO
The Associated Press

Albert Pujols taking his final swings in October, Julio Rodríguez stepping in for the first time. Max Scherzer and Jacob deGrom facing Manny Machado and Juan Soto. Bryce Harper, back at last. José Ramírez and his Cleveland teammates trying to break a long drought — with a new name.
MLB・1 DAY AGO

Buck's back: Showalter gets another October shot with Mets

NEW YORK (AP) — The last time Buck Showalter managed a playoff game, he ended up on the hot seat after an agonizing loss for Baltimore. Six years later, a shot at redemption begins Friday with the New York Mets. The popular Showalter takes his fourth franchise to the postseason this weekend when the Mets host San Diego in their best-of-three wild card series. The veteran skipper has spent more than two decades pacing major league dugouts and is still seeking his first World Series appearance. “He’s got that chance — and that’s really what you come back for,” said former teammate Don Mattingly, who just stepped down as manager of the Miami Marlins.
QUEENS, NY・1 HOUR AGO