How Rich Is Lin-Manuel Miranda? 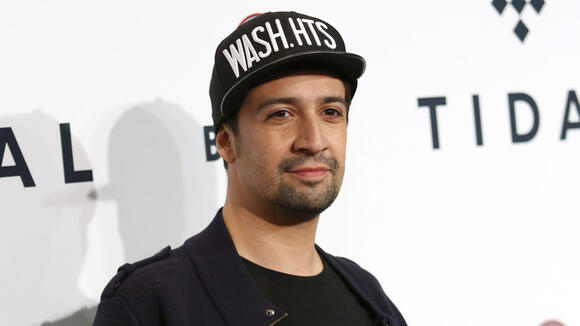 Lin-Manuel Miranda is most recognized for playing the titular role of founding father Alexander Hamilton in the record-breaking musical “Hamilton”  — which he also wrote, composed and won the Pulitzer prize for — but the American composer, rapper and actor is also a multi-award-winning performer with an extensive list of Broadway and film credits to his name . That list of credits includes “In the Heights,” a musical which Miranda wrote the music and lyrics for (and starred in, too). It’s no surprise, then, that the 41-year-old has amassed a net worth of $80 million, according to Celebrity Net Worth.

Here’s a look at the multi-hyphenate’s background and how he made his money before the premiere of the 2021 Primetime Emmy Awards.

Find Out: The Economy and Your Money: All You Need To Know
Learn More: The Richest Celebrity From Every State

Raised in New York City to parents of Puerto Rican heritage, Miranda started writing musicals in high school, and never abandoned his love for music and the stage. He wrote the earliest draft of “In the Heights” as a sophomore at Wesleyan University. The play later became a hit Broadway musical, earning 13 Tony nominations and winning four awards, including Best Musical and Best Original Score.

By far, Miranda’s largest paycheck has come from “Hamilton: An American Musical.” As one of the original cast members, not to mention the writer, composer and lyricist for the show, Miranda earned $6.4 million annually while starring as Alexander Hamilton on Broadway. This includes the profits he made from royalties as well as his salary as an actor. And Miranda will continue seeing 7.5% of the show’s revenue for as long as it runs. In February of 2020, Disney purchased the film rights to a live performance of  “Hamilton” for $75 million.

“Hamilton” and “In the Heights” aren’t the only sources of Miranda’s massive wealth. In 2011, he co-wrote the music and lyrics for “Bring It On: The Musical,” and later went on to write songs for Disney’s “Moana.” Later in 2021, he’ll make his film directorial debut with an adaptation of Jonathan Larson’s “tick, tick…BOOM!”

Outside of writing and composing, Miranda has appeared on a wide array of television shows, including “The Sopranos,” “House,” “Sesame Street” and “His Dark Materials.” He was also featured as Jack the lamplighter in 2018’s “Mary Poppins Returns.”  He also earned $625,000 over five years as a MacArthur Foundation fellow.

Little is known about how Miranda spends his earnings, but he co-owns the Drama Book Shop in New York City, an independent bookstore where Miranda first penned In the Heights. He also purchased and sold property in the Inwood neighborhood of Manhattan, according to Celebrity Net Worth.

This article originally appeared on GOBankingRates.com : How Rich Is Lin-Manuel Miranda?

How Lin-Manuel Miranda and Andrew Garfield made Tick, Tick...Boom! their collective labor of love

With Rent, Jonathan Larson taught a generation of theatergoers how to live "La Vie Boheme"—including the next generation's musical-theater wunderkind: Lin-Manuel Miranda. "I saw Rent on my 17th birthday and that was the show that unlocked for me that it was possible to actually write musicals," he tells EW. "That was the year I went from just liking musicals to having the audacity to think I could maybe write one."
MOVIES・10 DAYS AGO
GoldDerby

It wouldn’t be a “Dancing with the Stars” “Disney Night” without the requisite promotion of an upcoming Disney film. In season 25 Nikki Bella‘s jazz routine previewed the eventual Oscar winner for Best Original Song, “Remember Me” from “Coco.” Then in season 27 Joe “Grocery Store Joe” Amabile‘s jive previewed “Ralph Breaks the Internet.” And in season 29 Nelly‘s foxtrot gave us a glimpse at the Oscar-winning “Soul” score. This year’s “Disney Heroes Night” showcased gymnast Suni Lee dancing a salsa to Lin-Manuel Miranda‘s “Colombia, Mi Encanto” from the upcoming film “Encanto,” and for all we know we just hear the...
THEATER & DANCE・12 DAYS AGO
Daily Mail

Lin-Manuel Miranda was joined by his Hamilton collaborator Daveed Diggs on the red carpet of the Freestyle Love Supreme premiere. The 41-year-old actor-writer-director rocked a dapper look while interacting with fans at the Booth Theater, alongside 39-year-old Diggs. Miranda co-created the concept for Freestyle Love Supreme with Anthony Veneziale and...
MOVIES・4 DAYS AGO
Page Six

Lin-Manuel Miranda took the stage at the reopening of Broadway’s “Freestyle Love Supreme” Tuesday night at the Booth Theatre, spitting rhymes and telling theatergoers to keep coming back. The show, which centers around improv raps to audience suggestions and features special guests, was created as a hip-hop improv group in...
MOVIES・2 DAYS AGO

Bella Kidman Cruise was a contributing artist at Courtney Love's art exhibit in London with all proceeds going to charity. Bella Kidman Cruise made a rare public appearance to celebrate the 30th anniversary of Hole's Pretty on the Inside album. On Thursday, she was spotted at the event alongside tattoo...
CELEBRITIES・22 DAYS AGO
AOL Corp

Meg Ryan hasn't been on a red carpet for nearly two years, but it doesn't mean she forgot how to work one. The When Harry Met Sally... actress, 59, lit up the red carpet at Saturday's Academy Museum of Motion Pictures long-awaited opening gala in Los Angeles. She wore a long black and pink gown by Ulyana Sergeenko for the step-and-repeat in front of photographers. She also wore black, open-toe platform heels and styled her signature sun-kissed, wavy blond locks down.
LOS ANGELES, CA・26 DAYS AGO
thefocus.news

Singer Tommy DeBarge, a member of R&B band Switch, has died aged 64. As the news of his death is shared online fans have wondered about Tommy DeBarge‘s wife and marriages. Switch vocalist and guitarist Tommy DeBarge’s first wife was Yolanda Payne, who was fondly known under the nickname Duck/Ducky.
CELEBRITIES・1 DAY AGO
Best Life

If your parents are Danny DeVito and Rhea Perlman, we can only imagine it's hard to break away from the bright lights of Hollywood. And seemingly, the former couple's three children have all been lured. At one point or another, all of the DeVito-Perlman kids have dabbled in acting, but it was recently announced that their oldest child, 38-year-old Lucy DeVito, will be starring alongside her father on a new series. To see Lucy now and find out what she's working on with her dad, read on.
TV & VIDEOS・26 DAYS AGO

Cinematographer Halyna Hutchins, who worked on a number of indie productions including Archenemy, Blindfire and The Mad Hatter, died Thursday after being injured when a prop gun was discharged by actor Alec Baldwin on the set of Rust. She was 42. “I’m so sad about losing Halyna. And so infuriated that this could happen on a set. She was a brilliant talent who was absolutely committed to art and to film,” Archenemy director Adam Egypt Mortimer wrote on Twitter. “As is profoundly true in the art of cinematography, words alone cannot capture the loss of one so dear to the AFI community,” the...
LOS ANGELES, CA・2 DAYS AGO
kiss951.com

Kelly Clarkson caused a stir when she posted a picture of herself via Instagram on the set of The Voice in a short black dress with a big silver zipper. Fans immediately started to comment on her look. Most fans said she looked “beautiful” and called her “gorgeous,” but one...
CELEBRITIES・2 DAYS AGO
GOBankingRates

Paul Stanley, best known as rhythm guitarist and co-lead vocalist along with Gene Simmons for the rock band Kiss, has a net worth of $200 million, Celebrity Net Worth reported. Rock Celebrities notes...
SMALL BUSINESS・4 DAYS AGO
NME

Granville Adams, who appeared in acclaimed HBO prison drama Oz, has died of cancer. The actor played inmate Zahir Arif in the show from 1997. He appeared in a recurring role in Homicide: Life On The Street, which co-starred Brooklyn Nine-Nine‘s Andre Braugher. The actor’s family announced the news of...
CELEBRITIES・12 DAYS AGO

According to a recent social media post, “Blue Bloods” star Steve Schirripa has called off an upcoming event. The 64-year-old actor shared the disappointing news on Saturday, Oct. 23. Here’s what the former star of “The Sopranos” had to say: “Do (sic) to unforeseen circumstances the event in Port Washington...
CELEBRITIES・10 HOURS AGO
Fox News

Jon Stewart is putting on his public relations cap in defense of longtime friend, comedian Dave Chappelle, who Stewart is adamant was not trying to be divisive in his latest comedy special, "The Closer." Netflix employees staged a walkout on Wednesday after previously taking to social media and issuing internal...
CELEBRITIES・2 DAYS AGO
Deadline

Ricarlo Flanagan, the actor, rapper and stand-up comic who was a semifinalist on the ninth season of Last Comic Standing, has died. He was 40. Flanagan’s agent Stu Golfman of KMR Talent confirmed the news to Deadline, saying that “Ricarlo was one of the nicest people i have ever met in my life and a joy to work for. He will be missed dearly.”
CELEBRITIES・11 DAYS AGO
flickprime.com

Robin Williams’ Last Words: What He Said to Wife Susan

Susan Schneider Williams, Robin Williams’ widow, shared the final phrases he mentioned to her earlier than his loss of life in 2014. Schneider Williams is an advocate at present, spreading consciousness about Lewy Body dementia, the mind illness that went undiagnosed for her late husband, Robin Williams, till his suicide and post-mortem in 2014.
CELEBRITIES・3 DAYS AGO
Hello Magazine

Demi Moore made another major style statement with her latest social media post, as she showed off her look for a special event. The star attended the Elle Women in Hollywood event which championed the efforts of women in the industry involved with activism and other incredible work. She shared...
BEAUTY & FASHION・2 DAYS AGO
TVOvermind

During the late 1990s and early 2000s, Seann William Scott made a huge name for himself as one of the stars of the American Pie film franchise. His character, Steve Stifler, is arguably one of the most memorable of the era and he has carved out a special place in pop culture history. Throughout the mid-2000s, Seann continued to appear in some pretty popular comedies, but by the time the 2010s rolled around he had started to fade from the spotlight. In the years since he played Stifler, lots of people have wondered what Seann is up to. The good news is that he’s still around and you’ll probably be seeing him much sooner than you think. Keep reading to find out what happened to Seann William Scott.
CELEBRITIES・1 DAY AGO
Los Angeles Times

The first trailer for Aaron Sorkin's "Being the Ricardos" gives fans (and skeptics) a fleeting glimpse of Nicole Kidman as comedy icon Lucille Ball.
LOS ANGELES, CA・4 DAYS AGO