GOT7's Mark, Sanjoy release new song 'One in a Million' 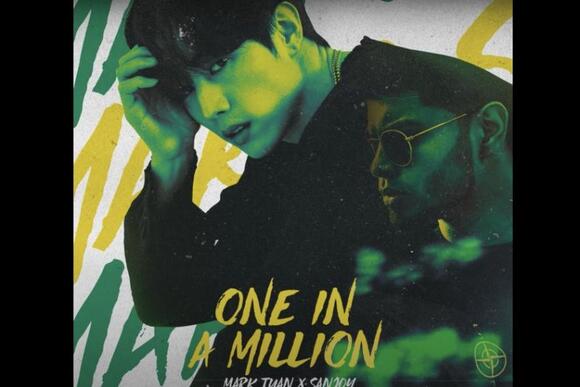 The 27-year-old K-pop star and Sanjoy, 29, both American singers, released the English-language single "One in a Million" on Friday.

In "One in a Million," Mark and Sanjoy both sing about a special person that they want to spend forever with.

"One in a Million with my brother @marktuan is OUT NOW!! hope you guys love it," he wrote. "this is just the beginning. can't wait to show you all the surprises we have coming!!!!"

Mark and Sanjoy will release a music video for "One in a Million" on Sunday.

Mark is a member of the South Korean boy band GOT7, which also consists of JB, Jackson, Jinyoung, Youngjae, BamBam and Yugyeom. The group last released the EP Dye in April.

Mumbai (Maharashtra) [India], July 20 (ANI/PNN): Neha Malik features alongside Nikhil Dagar in the music video of Master Saleem's new track "Saath". The song, slated to release on July 20, has music by T-Series and lyrics by Kiranjeet and Choreographed by Ranju Varghese while the video is directed by Anand Kumar.

Normani’s newest single “Wild Side” recently dropped, attracting attention with its prominent sample of Aaliyah’s hit song “One in a Million.” Now, shortly after its release, the late singer’s uncle is saying that permission wasn’t granted to sample the song, according to a report by TMZ. Barry Hankerson, Aaliyah’s uncle...

Dustin Lynch Releases Not One, But Two Songs for Fans

Dustin Lynch recently released not one, but two songs for his fans. Dustin shared, “’Not Every Cowboy’ and ‘Pasadena’ are about that timeless, authentic, American cowboy love story. They felt special since the day they were born and I’m so excited they’re out for everyone to enjoy.”. Check out “Not...

Khalid has announced his third album, Everything Is Changing, two years after his last album, Free Spirit. The 23-year-old singer has released a new single, The New Normal on all streaming platforms.He also released a video for the song. Khalid has made appearances on singles from different artists this year...

July 15 (UPI) -- South Korean boy band Seventeen has released a dance practice video for its song "Anyone." The K-pop group shared a video Thursday that gives a behind-the-scenes look at a rehearsal for the song. The video shows the members of Seventeen performing the "Anyone" choreography in a...

Four new Pop Smoke tracks have been released as part of a deluxe edition of ‘Faith’, his second posthumous album. The late Brooklyn rapper – whose real name was Bashar Barakah Jackson – was shot and killed during a home invasion in Los Angeles in February 2020. He was 20 years old.

Kanye West fans are today rejoicing at the news that the rapper's highly anticipated new album, Donda, is being released this Friday (July 23). The announcement was made on a Beats By Dre commercial which aired during Game 6 of the NBA Finals. The ad previewed a track called "No...

Low have shared the second single off their anticipated 13th album HEY WHAT, following the excellent lead single "Days Like These." Compared to the in-your-face lead single, "Disappearing" is a more swelling, ambient piece, but Alan Sparhawk and Mimi Parker's harmonies still drill their way into your brain on first listen. Check it out below.

Taylor Swift has celebrated one year passed since the release of her Grammy-winning “Folklore” album by giving fans an anniversary gift: an alternate, “original” version of bonus track “The Lakes” that has a more elaborate arrangement by co-writer/co-producer than the previous recording did. “It’s been one year since we escaped the real world together and imagined ourselves someplace simpler,” Swift wrote on her social media accounts. “With tall tall trees and salt air. Where you’re allowed to wear lace nightgowns that make you look like a Victorian ghost every day & no one will side eye you cause no one is...

Iron Maiden Release New Song, ‘The Writing on the Wall’

Listen to a pummeling new song from Iron Maiden, “The Writing on the Wall,” which marks the metal band’s first new music since 2015. Metal titans Iron Maiden have just debuted a music video for their new song, “The Writing on the Wall.” The much-anticipated tune is the first new song the band has released since 2015’s “The Book of Souls,” and it follows several weeks of teasers from the band.

Brisbane based Semantics have announced that they have signed to SideOneDummy Records. The band have also released their first single on the label, "Sleep at Night". They will be releasing an LP in 2022. Semantics released If You're Not Alright in 2019. Check out the song below.

Do you remember where you were when Taylor Swift hit us with folklore? Maybe you were on the afternoon train to your saltbox house on the coast. Or meeting someone behind the mall. Or showing up to Betty’s party and stirring shit up in the garden. Wherever you were, get ready to be hit with the pummeling force of the passage of time: That was a year ago today. To commemorate the occasion, Swift tweeted a link to an alternate version of bonus track “The Lakes” on Saturday morning, writing, “It’s been 1 year since we escaped the real world together and imagined ourselves someplace simpler. With tall trees & salt air. Where you can wear lace nightgowns that make you look like a Victorian ghost & no one will side eye you cause no one is around.”

GOT7 member Youngjae has opened up about embarking on a solo career after years of being part of a group. In a new interview with L’Officiel Hommes, the K-pop singer shared that he misses working with his fellow GOT7 members. He noted that he “often” looks back at their past perfomances, noting that he feels the seven-member group are “the best” when they are together.

Hawthorne Heights have shared their brand new single "Constant Dread" which features Brendan Murphy of Counterparts and comes from their forthcoming album. JT Woodruff had this to say about the new single, "When writing, I tend to dig through memories, both good and bad. In, Constant Dread, I was searching through one of my favorite tour memories. Warped Tour 2017, in the tour bus village.

Bastille Release New Song Give Me The Future

Bastille have shared a new song. Following Distorted Light Beam, Give Me The Future serves as the second preview of the band's upcoming fourth album, due out later in 2021, though a release date is still to be confirmed. Cast across a light, echoey beat, ethereal synths, and a soaring...

You ever get in a Lyft really late at night, and the driver is blasting some terrible music from his radio like he thinks he’s driving a goddamn nightclub, but you’re too polite to ask him to turn it off, so you just stick your earbuds in and hope your music is louder than his?

One year after its release, Taylor Swift's fans are taking a moment to reflect on the life-changing impact of the superstar singer's eighth album, Folklore. Released on July 24, 2020, Folklore represented a surprise pivot towards indie-folk that proved a critical and commercial blockbuster for Swift, earning the album of the year Grammy and topping the Billboard 200 albums chart for eight nonconsecutive weeks.

“Dancing with the Stars” mirror ball champ Mark Ballas and his wife, BC Jean, strive to take fans of their band, Alexander Jean, on a journey. “I wouldn’t want anything we put out to feel like it’s one note,” Ballas said. Their EP, “Coming Down” (Parts & Labor Records), continues...

Mark Tremonti Releases Anthemic New Song, ‘If Not for You’

Mark Tremonti of Alter Bridge and Creed has released a new song with his band Tremonti, “If Not for You”. Mark Tremonti is constantly evolving and keeping things exciting, and that’s evident on his latest Tremonti single. The Alter Bridge and Creed guitarist just unleashed the track “If Not for You,” which features fuzzed-out vocals, thick guitars and a strong, anthemic chorus. Watch the music video for the song below.