Jamie Moyer on 2007 Phillies: most 'somber, angry, upset' clubhouse I've ever been in after NLDS loss to Rockies 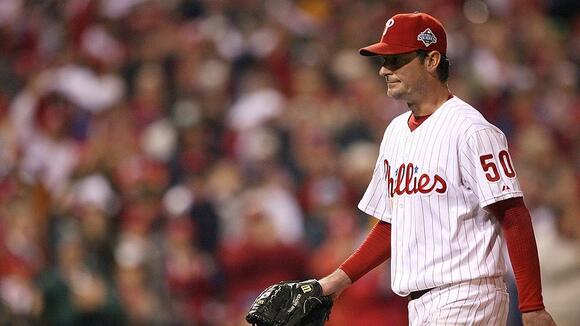 Jamie Moyer did his part in the 2007 NLDS. At 44 years old, Moyer started Game 3, allowing one run and striking out five batters over six-and-a-third innings. Unfortunately for the veteran left-hander and the rest of his team, the Phils didn't quite have the same success. Philadelphia's pitching staff had a 5.54 ERA in the Rockies' three-game sweep. Their lineup mustered a paltry .172 batting average in the series.

And given the fact that the Phillies barely snuck into the playoffs over the New York Mets in a memorable late-season surge — and simultaneous Mets' implosion — it was a real gut punch to exit the postseason without winning a single game.

"We had a really good team, we had a lot of young players, we had a lot of players that came through the Philadelphia Phillies organization and there was passion about the game, there was passion about winning baseball," Moyer recalled on "The Boone Podcast" with Bret Boone. "But in '07, we ran into a buzzsaw... with the Colorado Rockies and they cut through us like butter.

"I don't know if I was ever in a clubhouse that was more somber, and angry, and upset than that clubhouse in 2007."

But that didn't necessarily paint a bleak picture for the Phillies. Instead, Moyer says that the bad taste the team had in its collective mouth carried into spring training prior to their 2008 campaign, and veteran additions of players like Geoff Jenkins and Matt Stairs before and during the season helped to boost their morale.

"Again, this is what I loved about that team, because they were still dwelling on that bad taste," Moyer recalled. "And we went out, we had a really nice year, played together as a team, and the Philadelphia Phillies front office did an unbelievable job of piecing that team together..."

Jenkins had some key moments...

...and anyone with a brain remembers what Matt Stairs was able to achieve in a Phillies uniform, at least in one at bat.

And for Moyer, who had played a major role as a key starter throughout the season (16-7, 3.71 ERA), the 2008 season wiped away that bad taste and then some. For a guy who had played with six different clubs over 21 seasons before arriving in Philadelphia, there must have been a lot of memorable moments. But nothing topped the 2008 World Series.

"When they won it in '80, I had skipped a day of school and went to the parade, and 20 years later I was sitting on one of those floats in the parade," Moyer said. "So you just never know what life is gonna give you or what opportunities you're gonna have in life.

"To me, that was the pinnacle of my career, that 2008 season, that 2008 team and being fortunate enough to be on a team that won a World Series."

The Yankees won the Anthony Rizzo trade. Here’s why.

1B Anthony Rizzo was traded from the Chicago Cubs to the New York Yankees on Thursday, in exchange for Yankees’ prospects RHP Alexander Vizcaino (NYY No. 9 prospect per @MLBPipeline) and OF Kevin Alcantara (No. 12). Chicago is also paying for the remainder of Rizzo’s 2021 salary. If that seems...

NEW YORK — With the Trade Deadline just over one week away, trade proposal season is upon us. In this proposed blockbuster, the Yankees add an MVP-caliber infielder and a left-handed hitting outfielder, but part ways with one of their best young players in the process. Here's the hypothetical deal,...

Call it whatever you want; disgusting, classless, nauseating, or off-putting. But whatever you call, it should most definitely result in a multiple-game suspension for Javier Baez. The Chicago Cubs’ infielder’s on-field “celebration” following a walk-off single versus the Cincinnati Reds was one of the more objectionable displays I’ve ever seen in baseball.

The San Diego Padres are going for it. Sunday evening, the NL West contenders made the first huge move of the trade deadline. San Diego has acquired All-Star second baseman Adam Frazier from the Pittsburgh Pirates. ESPN MLB insider Jeff Passan was the first to report the move. “The San...

The New York Yankees are reportedly making a run after one of the top sluggers in the National League. According to Joel Sherman on the New York Post, Washington Nationals slugger Kyle Schwarber is expected to be traded ahead of Friday’s deadline. And yes, the Yankees reportedly have interest. They’re not alone, though. The Blue Jays and Red Sox may also be in the mix.

Dodgers to tangle with Giants after walkoff loss to Rockies

DENVER — And now, the main event. In the blue corner, the defending World Series champions, your Los Angeles Dodgers. In the black corner, or the orange corner, depending on the day, the archrival San Francisco Giants. The teams with the two best records in the major leagues: the Giants...

The Washington Nationals are reportedly open for business ahead of Friday's MLB trade deadline. According to MLB Network's Jon Heyman, "everyone but Juan Soto is available" is the message being sent from the Nationals to the rest of Major League Baseball. Washington has some of the most intriguing trade targets...

Look, I think we’re technically entering Week 15, but my overlords at FantasyPros have decided it’s Week 16. Alas, the All-Star break is now behind us so let’s dive into some developments that can help our fantasy teams as the season’s second half gets underway. Remember to reach out on...

Astros: Ode to Abraham Toro, So Long and Good Luck

I attended the first two games of the three-game series between the Houston Astros and Seattle Mariners here in Seattle. The games certainly didn’t lack in the excitement department with lots of home runs and shenanigans. However, the big news came before game two. Just mere hours before the game...

Is Bryce Harper trying to send a message to the fans, or the Philadelphia Phillies front office?. During Monday night’s series opener against the Washington Nationals, several fans noticed that Harper’s bat bore someone else’s name and MLB team. It’s not every day you see a Phillies hitter stepping up...

The Philadelphia Phillies are in second place in the NL East, 2.5 games back of the New York Mets for first place entering play on Wednesday. One of their biggest needs has been starting pitching as, since June 15, the Phillies starters have an ERA of 4.93, which is 21st in baseball in that span but they need starting pitching help even more now.

(670 The Score) Cubs shortstop Javier Baez’s exuberant celebration on his walk-off single off Reds reliever Amir Garrett on Monday night will cost him in the wallet. Baez will draw a fine from MLB for his antics but won’t be suspended, Jesse Rogers of ESPN reported Wednesday. After hitting a towering fly ball to center field that went for a long single with the bases loaded and out out, Baez screamed at his nemesis Garrett and walked slowly – really, really slowly – to first base. He also tossed his bat in the vicinity of Garrett.

Second baseman Cesar Hernandez was traded from the Cleveland Indians to the Chicago White Sox on Thursday, according to multiple